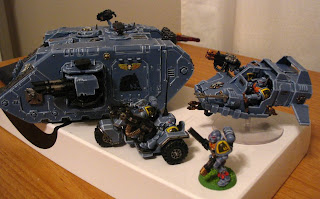 By request, here's some pictures of the new decals on my Space Wolves. Most of them came out intact, but there were a few with little dings and whatnot that I might try to touch up with black later. 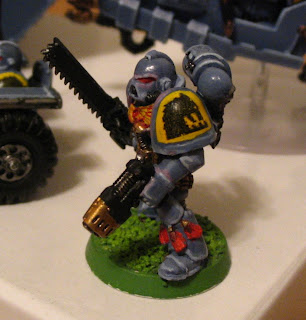 Thinking about improving upon the Wolves: among a few other changes, against my better judgement I think I will try out jump packs on the blood claws, and take the squad down to 8 total including a wolf guard leader with lightning claws. The foot HQs will now run with the grey hunters in Rhinos (just need to find an old model rhino to match the one I have). I think this list will test a lot of my previously held notions about some of the Space Wolf units, and it'll be just about as competitive as I can make it for a while. Here's the Sea Wolves of the Near Future:

I like them a lot. Gives a nice uniform feeling to the models. I especially like that you are using one of the "other" great companies that doesn’t see much play. When I played SW I was the Double Headed wolf Great Company (forgot its name).

What is your tactic w/ the Rhinos? Same as DP... drive up and unload and shoot. Or drive up pop smoke, wait, then unload and charge?

Good luck with jump pack BC... how much is that unit?

It makes the models pop and it is a nice touch you don't usually see in Space Puppy armies.

Nothing against jump troops (since I usually run two 8 man squads) but I do remember that the 3rd Edition cost for Vanilla Marine jump troops was a bit higher than it is nowadays. I can only imagine the cost for Space Puppies is higher still. So, what is the point cost difference between an 8-man Blool Claw pack with jump packs and that same pack in a Rhino? Specially considering that three Rhinos are more survivable than two.

If I were going up against this army I would target the Rhinos first, the Speeders second, and the Wofl Guard Termies when they popped out.

Thanks for following up on the decals. I used the laser printer clear decals and had meh results. I agree that microset/sol greatly improve the appearance of decals, but do not remove the glossy look entirely. I have heard that a matte coat overspray after microsol is the way to go. I plan on trying this out with the Wolves army I'm building (I'm going to try to make Sun Wolves decals, hence my question).

I like the new list, but had a question: Do you have any experience running a WGL with the scouts? I plan on running 5 scouts w/ Meltabombs and a powerfist WGL, and wondered if you had any insight on that combo.

thanks everyone for the compliments.

@kings - I'm an ocean person so it Krakendoom's GC jumped out at me. Maybe Wolf Lords will be more worthwhile in the next codex and I can attempt a conversion to model him up. the rhinos are mostly for one, two turns max of transport, line of sight blocking thereafter, for both the hunters and the blood claws. and whether they can get out and shoot right away depends on how exposed they are, i guess. in any case at least i'll have more on the board to shoot at.

@frank - Oh for sure. About 60 points more expensive than their vanilla equivalent (supposing the rules allowed the same upgrades). Nillas have WS/BS 4 and Ld 8, but blood claws have the space wolf traits plus double attacks on the charge and 2 can be equipped with powerfists. That many powerfists is seriously sick with enough insulating ablatives - erm, I mean battle brothers. I was trying to experiment with untying them from armor, they are very expensive, at the moment I think jumppacks could be a fun way to earn that charge bonus more often than they do now. Which is indeed balls expensive. But hopefully they will come down a little bit in cost in the next revision (or still be included as an option at the very least). But to answer your question, it's 96 points cheaper to have them in a rhino with armor and smoke.

@uber - thanks for coming back to my page. yes, i was told by bigred at BOLS that matte spray is the way to finish it off. i even have a can of it. but that shit scares me! anyway i tinker so much with swaps and retouches i'd hate to layer down something i couldn't easily paint over. but i will probably end up trying it. personally i have never run a powerfist wolf guard with the scouts. i thought about it recently, i guess i'd be afraid that it'd make the squad too expensive for me to use it the way i like to, which is usually only as a distraction (albeit a rather bitey one most of the time). but with those 4+ saves they rarely survive three turns. i'm a little short on points just now but you've got me intrigued, so i'll probably model one up soon and try to fit it into a list.