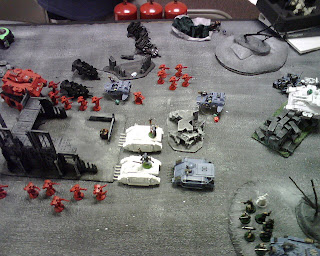 Wolf Lord Hakr Varghoss peered through his oversized optics at the enemy formation on the far side of the enormous fabricum, his voice breaking the silence that had settled on the wooded hillside. "They have spotted our approach. The main group has turned to bear and is heading this way. Armor and infantry moving at full speed."

The black-robed inquisitor turned and glanced up briefly at the space marine looming next to him before squinting back into the distance. "It would appear Maika was unable to disable their sensors. Just as well. I already transmitted my complete judication, guilty of course. More than enough evidence of that, I should think. These subhuman blood drinkers must be purged of their despicable disease." Xocratos paused, choosing his next words carefully. "It would perhaps be advantageous," he paused again, "to now close the distance ourselves and disrupt their full attack."

The grey-haired giant continued to watch through his field glasses while he replied. "Your counsel is wise, Lord, but the moment must be chosen very carefully. This is an old game to us. We must meet their advance at the just at the precise moment that their inertium brings them falling right onto our swords. Their own madness will be their undoing."

I played a 2500 point cleanse game with Jay up at Battleforge on Thursday. He brought a big Blood Angel force composed of Lamartes, 3 venerable death company dreadnoughts in drop pods, a big death company, multiple 5-man assault squads, 2 squads of 2 land speeders with multimeltas/heavy bolters and assault cannons, and 3 baal predators. I took my latest 2000 wolves list but added an inquisitor lord (with my usual retinue), a callidus assassin, a vindicator, and upgraded the wolf guard battle leader to a lord with a belt of russ. I was trying to maximize pre-game trickery, though as it turned out none of it really had much of an effect besides being able to pick my own quarter. This was a really fun game though, as the space wolves moved up in rhinos to meet the brunt of a raging blood angels attack. I got first turn (without my dread's reroll) and zapped one of the baals right off the bat (ahem) with a landspeeder, and dropped a few assault marines as well with shooting. The blood angels responded by stunning both of my land speeders and one predator with mass assault cannons, then pounding on two of the rhinos with power fists, causing one of them to be evacuated. Very luckily for me, they weren't pinned on their way out. On my second turn, all my transported infantry were perfectly poised to counter-attack into the nearby enemy marines. Together with the inquisitor retinue and two of the tanks, the wolf lord's unit of grey hunters and the blood claws shot the blood company up good leaving only three survivors. The rune priest's squad wiped out one assault squad and segued into a second. The scouts arrived as well, and managed to knock off one a baal's assault cannon turret with their plasma pistols.

His next turn saw the arrival of all three of his venerable furioso dreadnoughts. One took on the wolf scouts, burning up three of them immediately, a second dropped behind my right predator and wrecked it with a flamer to the rear armor, and the third landed just behind my blood claws, next to my inquisitor and retinue. It was a devastating attack, but once again the space wolves were left in a good position to react. The scouts ran in shooting and managed to wreck the big lug in assault with the wolf guard's power fist. The blood claws also jumped in with the closest dreadnought but were unable to do more than stun him. When a second dreadnought jumped in and started pounding the blood claws with more attacks it was over. Lascannon shots from my surviving annihilator destroyed one of his last two baal predators, and my own venerable dreadnought arrived to put the kibosh on the other one with help from a land speeder. The grey hunters all moved back towards the middle and brought down the last blood angels land speeders with shooting and assault. After the dreadnoughts finished off the blood claws, they tore into my tanks, destroying both of them eventually. At the end of the game, I was contesting my own quarter while holding two or maybe three of the other quarters, depending on whether a last second furioso charge should have gone into a rhino rather than the wolf lord's grey hunter squad because of the thirst or whatever.

We didn't count up victory points, but it looked like I had won by a decent margin, still not a rout by any means. In any case, I was mainly interested in getting more experience with the core of the army. The game was more proof to me that my list now is the best it's ever been; whether or not it's actually all that competitive for tournament play is definitely up for debate. There's still a lot of army types I haven't played against with them and they're still coming from a very old codex.
Posted by bullymike at 8:14 AM

I'm pretty sure you can't have an Inquisitor Lord in a SW army. Allies cannot be compulsory choices and due to the "Retinue" (whatever the one where you have to take an HQ for every 750 points) rule all SW HQs are compulsory.

well, i did read over that before the game, but i would say that since it says HQ units and not space wolves HQ units in the relevant text of the SW special rules, it leaves it open to using allied HQ units to fulfill that obligation. it does say it's different than other armies in that regard, so maybe nothing's "compulsory" for them in the same respect as other armies. so following that the line talking about using Wh as allies, compulsory units don't apply, and an allied hq can take the slot. doesn't the allied use text mention other chapters of space marines, not just vanilla marines, can use them? still i can see it both ways, even fluffwise they'd be pretty reticent to allow outside interference in their bizz nass.

anyway whadda ya gonna do, it was a fun thing to try, though in the end the WH units added zip to the game. i would have been better off just adding more space wolves anyway.

Are you going to bring these guys to the hobby tournament?

I'd love to but that makes 4 tanks and an attack bike I gotta paint up in a week, and I just got an xbox sooo... We'll see

The extra HQ units dont have to be from the SW codex. Back when anyone could take the emperor's champion I thought about adding him to my own SW army... didnt see anything wrong with it then and I dont think anything has changed either.

Looked like a fun game. Does that new Pred look odd with all those old Rhinos?

no, since all the rhinos are the old model and both preds are the new its not so incongruous, IMO.

and oops its 2 weeks to paint those models, not 1 week, so yeah i should be able to knock em out by then. can't wait

I need to take some time to reinforce the cron's because I have lots of broken , or nearly broken ones.

Hope you are enjoying the xbox!
Its really going to slow down your painting.