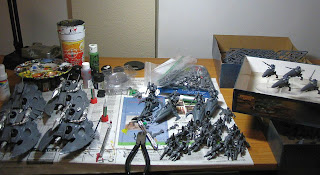 It's either junebugs buzzing at my back door, or it's an incoming Saim Hann warhost. Either way, my dog will probably eat them if given the chance, and then sick them back up in the middle of the night. I picked up a third fire prism at the tournament saturday so I figured I should just finish up their assembly, including the wave serpent. I only had to pin one of the prism crystal arms to the plastic axle piece, but I'll probably have to go back in the future when the other two break and reinforce them too. 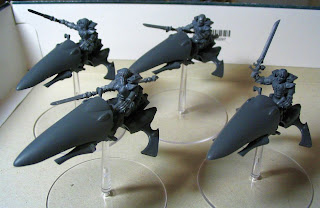 I also put the warlocks together. They came out pretty much like I planned. After the bitz program shut down at GW I gave up on the idea of obtaining shining spears control pads for them. First I hollowed out a bit into the guardian jetbike leg pieces with just the tip of a 3/8" drill bit, then used a pin vice to drill a small hole into the bottom of the new guardian body as well as into the hollowed out bit in the legs. I actually had to trim a muscle off of the guardian jetbike left arm in order to fit the more forward-fitting warlock body. I still have to replace the lower piece of the one guy's sword handle; I think it was an early candidate for my farseer's right arm, and I had trimmed it down for some reason. A ribbed paperclip piece might work, plus a little rune on the bottom or something.

I am not going to tell you to "get painting"... thats like saying "have a great summer" in some assholes yearbook.

I want to see some head bands on those ninja warlocks!!!