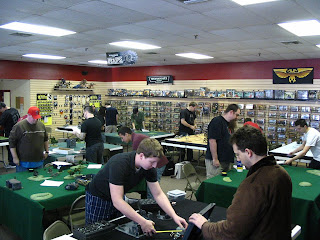 Battleforge set a record for attendance on Saturday - 20 people showed up more or less on time, and the store manager managed to keep things rolling very efficiently with plenty of tables and three interesting scenarios. As you may or may not know, the 2008 Battleforge 40k season features 'Eavy tournaments on the odd-numbered months, where almost anything goes and players are encouraged to bring the hardest army they can muster. The even months are Hobby ('Obby?) tournaments where painting and army composition count more towards your final score. You can find Battleforge's ruleset and judging criteria for the two different versions here (link opens a word document). For my part, I had the pleasure of facing off against friendly opponents wielding three distinctly different space marine forces, and I came away with two big wins with a big loss in the middle. Here's some more photos of the event. Nick won 1st with his mixed eldar army, Chris won 2nd with his mechanized eldar, and Robert won 3rd with his Thousand Sons. 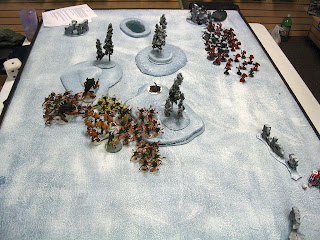 My first opponent was Brian, who had a chaplain and commander leading a large assault squad, two squads of terminators with assault cannons, a second assault squad, a couple of small tac squads with heavy and special weapons, a devastator squad with rocket launchers and a lascannon, and a whirlwind. Other than the assault cannons on the terminators, I wasn't worried about most of the marines. The only things fast enough to really circle me and shoot were the assault squads, and they had to get up close in order to do it. Genestealers led the charge with carnifexes providing fire support, and soon both terminator squads and both assault squads had been eaten. By the fifth turn, I had only lost less than half of my forces, and I was deep in his table quarter with the hive tyrant and a big stealer squad. Together they chewing up the rest of his army, right down to the whirlwind, while the rest of my units stayed back to capture quarters and terrain pieces. Tyranids: 19/22 points. Space Marines: 3 points. 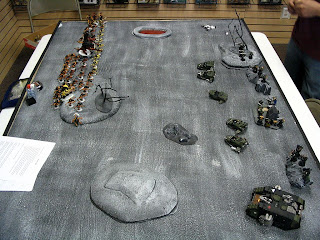 I had seen Josiah around at plenty of the Thor's Hammer tournaments last year but never played against him. He had a pretty low-tech commander, a chaplain and a big command squad with three power fists in a land raider crusader, two or three small plas/plascan tac squads, two or three small rocket launcher/lascannon dev squads, and five land speeder tornadoes. His assault cannons and heavy bolters had just totally eradicated Jay's tyranid army in the first round, and our lists were fairly similar. And with so many tables up and running in the store, terrain was very light, so I knew it was probably going to be an uphill battle. I set up the majority of my forces on my left side in an effort to consolidate away from any short range fire and have at least a few of my assault units reach the other side alive and win back some VPs. Of course, it was not to be. As expected, the land speeders and crusaders flanked me on the right with utter impunity (even though I maimed or wrecked several of the speeders), and the command squad charged and smeared in assault everything his gunline hadn't already shot down. The only survivor was the hive tyrant, who slowly crossed the vast desert between our deployments and wrecked shop on several squads to little overall effect. I'm not sure what I could have done differently to affect a different outcome, short of hiding everyone, and there just wasn't much terrain to hide a horde behind anyway. Maybe I'll try some sort of defensive strategy the next time I find myself against a mobile shooty force (eldar, tau), but I'm not exactly holding out much hope. Space Marines: 22/22. Tyranids: 0/22. 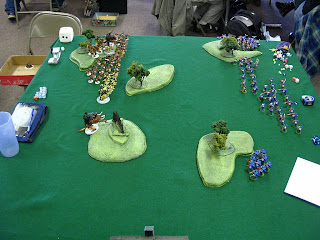 Frank was playing a fairly typical Frank list with an interesting exception: a small bike squad. He had a jump libby with fury of the ancients, a commander on foot accompanied by a tank-hunting 2-lascannon command squad, an assault-oriented scout squad, several small las/plas tac squads, two assault squads, three bikes with two flamers, and a rocket launcher/heavy bolter dev squad. I have a pretty even record against Frank, but we always have very interesting games and I was glad to be able to finish out the day facing his ultramarines. I deployed in a strong flank again on my left side, and just tried to move the stealer squads across the field as fast as possible. While I was consistently coming up with fives and sixes for fleet and armor saves, he was not doing nearly as well and his anti-infantry guns weren't able to cut the stealers down quick enough to keep them at bay. Two of the squads made it into assault with the scout and tac squad in the trees on his right, and the bikers and assault squad he sent out to try and slow the rest of the army down were eventually overcome themselves. The core of his forces in the center took casualties here and there from my sniperfex shooting, returning fire with mixed results against my bigger bugs, while the libby and his other assault squad circled around my right. I kept a stealer squad hanging back, and when they were in assault range I charged and wiped them out after a couple of turns with more excellent rending rolls. I did make one big mistake at the end that nearly cost me the game - I left the remnants of my very effective flying warriors standing dopily out in the open and they were quickly cut down by his heavy fire. The stealers in the trees on the left finished off their opponents and jumped out into the devastator squad in the center. He tried to fight them off with the remainder of his command and tac squads, but the 6th turn ended with the fighters still engaged in assault. Tyranids: 22/22 points. Space Marines: 0/22 points.
Posted by bullymike at 11:58 AM

That second game really looked like a killing field but over all you did a lot better than me for the day.

Now I think I should have attacked strong on the LRC side in that second game rather than avoid it. At the very least I could have probably accomplished one of the objectives (destroy the most expensive unit). Plus there was more cover on that side... I want a do-over.

Did you know you can create short links with AdFly and get money for every visit to your short links.