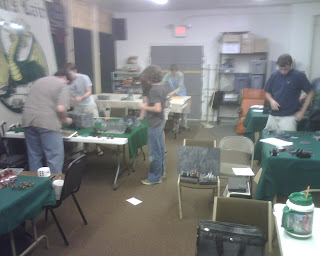 The Scourge of Zugarramurdi did very well on Saturday at the 2000 pt tournament at Dragon's Lair. Not one, but two recalcitrant chapters of space marines, as well as a sinister Eldar warhost were all judged guilty of heresy and made to submit to righteous excoriation in His name. Not all of the prisoners survived their penitence. I came in second place out of 12 people and got to play three interesting games against friendly opponents. My witch hunters have served me well, creating entertaining games and reliably earning solid or crushing victories, helping me to fly below the radar and ease into second or third at several tournaments now. 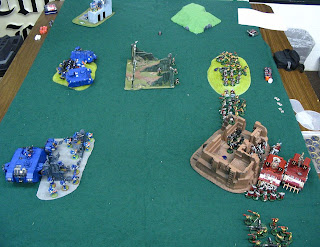 Lundy had a nicely painted ultramarines force consisting mostly of min lasplas squads with an assault squad led by a chaplain, two melta squads in heavy bolter razorbacks, assault terminators led by a chaplain in a land raider crusader, and a couple standard dreadnoughts. We rolled for three loot counters and I got to place two of them in my own deployment zone. He hadn't played against Witch Hunters before, which might explain why he charged the crusader forward in the first turn towards the same flank as the exorcists. They promptly lit the big guy up like the fourth of July, exploding the tank, pinning the terms, and scattering flamey wreckage into the nearby marine squad. They all survived the flak but were later whittled down by the exorcists and guard lascannons. I had deployed the assassins behind the center piece of cover, and he sent the two razorback squads in after them. The eversor was melted before he could do a thing, but the death cultists wiped out one squad and killed four more marines in the second. The dreadnoughts strode forward out of cover, and though I brought one down fairly quickly with a missile barrage, the second one survived to the fifth and final turn and nearly claimed a second objective after his assault marines had pushed my forces off the hill in the middle of my deployment. My Canoness and Seraphim had valiantly counter-attacked and defended the position for as long as possible, but powerfists will be powerfists and eventually they were destroyed. Both of us ended up claiming a single objective but with the witch hunters ahead by 400 or so victory points. Witch Hunters win, solid victory. 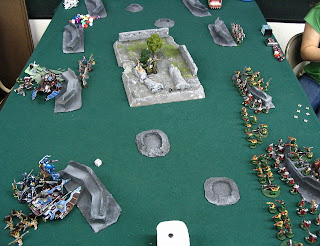 Marshall was a nice guy playing with a mixed eldar force consisting of an avatar, farseer, 10 guardians and a scatter laser (?), 10 harlequins, 10 dire avengers in a wave serpent, 6 rangers, 6 fire dragons, 6 warp spiders, 2 falcons, and a wraithlord. I think it was his first game against a witch hunters list too. I actually thought I was doing much worse this entire game than I actually was. He managed to wipe out a few guard squads and seriously deplete the retributors with shooting from the falcons, wraithlord. The warp spiders and fire dragons both jumped at my front line and got vaporized after singe rounds of shooting. I let the harlequins and scorpions get to the closest edge of the center terrain piece before springing the canoness, assassins, and seraphim at them, completely wiping them out suffering minimal casualties in return. The canoness in particular performed very well, shrugging off the mightiest attacks with her 2+ invulnerable on innumerable occasions. I finally destroyed the blasted Wraithlord (!) after two or three rounds of heavy shooting, earned a ton of points back from my surviving forces, and won by a decent margin. Witch Hunters win, crushing victory. 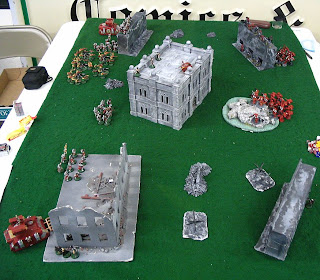 Brian, I kicked your ass in this game! Only kidding. I had several lucky breaks that saved me a lot of work and helped me to win in the long run. He was running a jump commander, jump chaplain, two large assault squads, two terminator squads with assault cannons, several small tac squads with missile launchers, and a small dev squad with missile launchers and a lascannon. I set up my guard across the field from his shooty squads, with the retributors and a sister squad nearby to help out with leadership. When the assault squad led by the chaplain and commander crossed the battlefield towards the center, the retributors killed just four of them with divine guidanced heavy bolter fire and they broke off the table... totally tragic. I set up the eversor on the right side of his deployment, but he got first turn and assaulted him with jump pack squad. Somehow he survived like 20 attacks including a powerfist and actually won combat. Unfortunately he wasn't so lucky in the subsequent turn and exploded on his attackers to no effect. His terminators moved up out of cover toward the middle and the exorcists shot the shit out of them. Unfortunately the assault cannon termies survived and the exorcist in the cover on my right was rended into early retirement. The death cultists jumped down and finished off one terminator squad, while the other climbed atop the building and were eventually destroyed by the canoness and seraphim. His missile batteries wiped out my entire left side minus the exorcist with a never-ending frag barrage. On my right, his surviving assault marine squad made a dent in a sisters squad before being finished off by the canoness and a death cultist. The seraphim claimed the center and earned back their points. Witch Hunters win, solid victory.
Posted by bullymike at 4:27 PM

Nice job pullin out second place. Who won? Personaly I am surprized you only got second with 3 wins? Does DL not give painting scores anymore?

p.s. bring back the puppies!

I got first with two slaughters and a crushing victory. Their is a pretty large painting score, and sportsmanship.