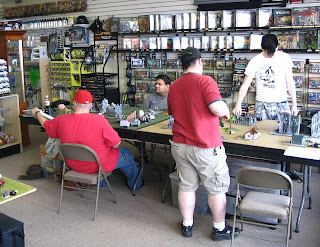 Last Sunday I went up to Ninja Pirates for a 2000 point rules of engagement tournament. There was an unusually small turnout, only 6 players, perhaps due to the big blowout in the corresponding event thread on the Austin forum, but more likely resulting from the games taking place on the last day of spring break. I don’t think many of the usual players at NP read the forum that much anyway. I actually wrote out a long entry about the argument but abandoned it after I realized I didn’t really give a shit about a few different people not getting along for whatever reason. It was a predictable flare-up in a community somewhat segregated by differing opinions on the competitive aspect of the game (there might be some old bad blood involved in the mix too). I don’t think it says anything bad about the Austin scene; in fact I think it’s a good thing that new players are more likely to find a sympathetic peer group with the different viewpoints represented, a few inevitable episodes of threadrage notwithstanding.

Aaanyway, after trading for another whirlwind missile rack to make my second exorcist, I decided to take a new variation on my old witch hunters/inducted guard list (see previous entry). The tournament sort of fell apart before the third round when a couple of the players took off for one reason or another, and my own two games were a little sloppy and somewhat anticlimactic. The main liability of my list is mobility. I have plenty of anti-horde and anti-armor shooting and a decent assault wing, but besides the seraphim, the only scoring units I have that can move 12" are the exorcists, and they aren’t really made to drive around and grab objectives. I could drop the cultists for a couple of rhinos for the 2 sister squads, but it would make the gunline less effective by moving their leadership-bracing books of St. Lucius away. In both of Sunday’s games I was pretty rusty with the acts of faith; hopefully after a few more warmups I’ll be back in the swing of things with the coeds. 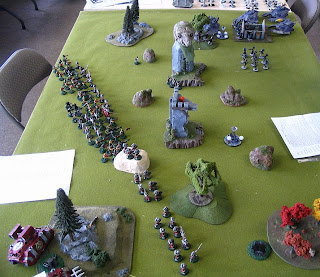 Aims drew "firebase" for her mission, requiring her to capture any two objectives on the board, and I drew "foothold," meaning I had to capture both of the enemy objectives. As I’ve already mentioned, mobility is not a strong point of this army and so I was already at a disadvantage from the start as we had both placed one objective each deep in our own deployment zones (the big triangle-shaped setups). I deployed my assassins far forward, which turned out to be a good distraction for her assault units (banshees, harlequins), but I made the mistake of anchoring the sister squads heavy on my right side rather than my left. The retributors were never able to bring their heavy bolters to bear, and after the single sister squad on the left was taken out, my guardsmen were left to fend for their own. The seraphim and canoness eventually repelled the banshees and harlequins, but the seraphim were brought below scoring and broken before they could try to contest Amy’s home objective. One fire prism was destroyed by exorcist and lascannon fire, but the second grav tank zipped around to take my distant objective. Since I had second turn, I contested it with a sister squad, and I would have taken one of her objectives in my 6th turn with the surviving retributors and tied up the game, but the time ran out and we didn’t have time to finish. Eldar wins, 1-0. 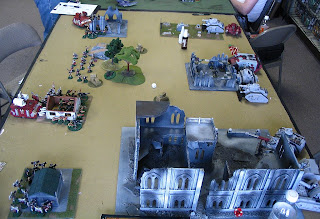 I was paired off against Jay going into the second round. He had an armored company list featuring a hellhound, a vanquisher, an exterminator, 3 or 4 standard russes, 2 basilisks, and a demonhunter inquisitor with a retinue and a land raider. He drew "rescue" for his mission (not great for an all-tank army) and I rolled for "firebase." I got first turn and things went downhill for him quickly. I was able to destroy a leman russ and a land raider right off the bat, and with all my lascannons and melta-missiles I was able to keep the same killing pace for pretty much the entire game. With no chance of victory, he started to kinda fuck around at the end, which led to a scenario in which the eversor exploded a leman russ vanquisher and a hellhound in a single turn with death or glory meltabomb attacks. Spectacular! The explosions even killed the death cultist hanging around behind him, but the eversor himself was untouched. Witch Hunters win, 2-0. 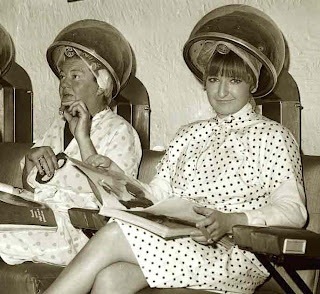 My third opponent, Clay, went to get a haircut. I supposedly got a bye win, and I might have even gotten third place overall, but who knows?
Posted by bullymike at 6:39 PM

Clay got a hair cut; how much hair does he have? He should have just brought some clippers and gone to the Ninja Pirate Sink... oh well.

Peronaly I dont think that Tank Company should have Land Raiders... MHO. However I am glad to see that it died early!

ya we all know your opinions on mixing raiders with guard tanks. i think it's a reasonable list but by jays own admission it doesn't fare too well. the tank doctrines are a cool concept, especially the one that allows you to reroll scatter dice. they should really incorporate that into the next guard book.

I really like the RoE rules, but Wymer just turned me off of it so much...

Yeah, I played a less effective list on purpose for this one. I just wanted to have a little fun! :)

What are you takin to the next tourni? I hope it is SW again.
t-hehehe