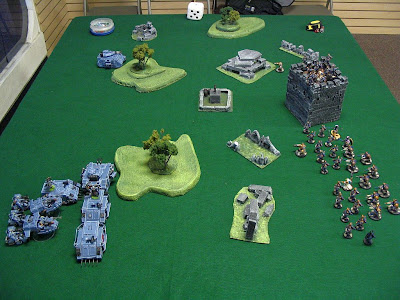 Hakr Varghoss and his crushing wave approached the castle ruins with a single battle tank across the valley covering the left flank. Scores of horribly stoic rubric marines were moving amidst the rubble now, driven onward by various mutated mystics and accompanied by a large contingent of tactical dreadnought marines, many of them bristling with heavy weapons. Hakr and his Sea Wolves had no real tactical mission on Kriegsmie save the outright extermination of the corrupted witches and their nightmarish charges. Death to the traitors! Death to the Thousand Sons, in the name of Russ! 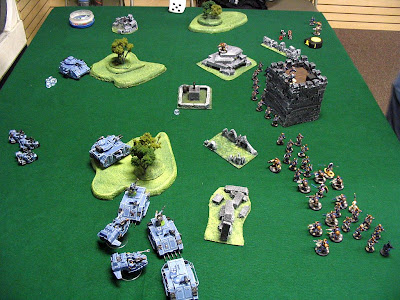 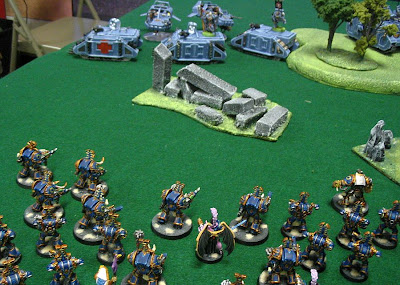 As the Space Wolves rhinos approached the enemy line, the traitor terminators fired a volley of plasma beams, blowing apart their mounted storm bolters. In response, each rhino launched a series of smoke charges, obscuring their position as they shifted to the right in formation. The Land Speeders hovered over the wolves' battle group and opened fire with their multimeltas, one of them hitting their mark. To their left, the wolves battle tanks and attack bike squadron found targets amongst a far tower and began to fire on them. 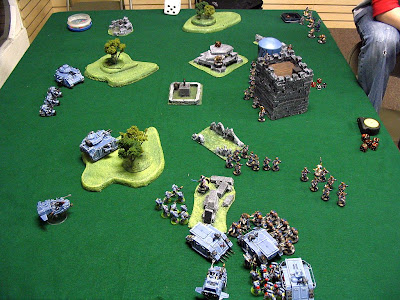 As the wolves rhinos passed a section of ruined wall, they slowed to a halt, pulling up tight behind one another to give cover to their disembarking passengers. Grey Hunters and Blood Claws stepped onto the low grass behind their pack leaders. The rune priest's hunter pack emerged on the enemy side of their transport, opening fire on a nearby squad of rubric marines. A mixture of haste and animosity sent their deadliest shots astray, as only a single enemy marine fell from concentrated bolter fire. The rune priest himself emerged on the other side and began to chant, bringing an obscuring cloud of smoke from the ground to slowly enravel the his grey hunter squad. It was too late, however, as enchanted bolts from the rubric marines found every last grey hunter, each screaming impact a horrible reminder to the other wolves of the arcane power of their enemy. Corrupted terminators charged into the sides of their transports, pounding and cutting with assault weapons to no avail; the armor held, praise Russ! The rune priest sensed a disturbance nearby and quickly turned to his left to see a pair of mutated warp witches approach, one of them slithering unnaturally fast into a rubble heap next to Hakr Varghoss and his hunter pack. When the witch with wings raised his arms and prepared to curse Varghoss' squad, the rune priest fell to his knees into deep concentration, chanting even louder, the power of his wolf totem barely able to keep whatever magicks the traitor sorceror was using at bay. Before the battle leader could react, the multiple-breasted serpentine monstrosity pounced and felled Varghoss with one sweep of his demon weapon. Displaying little surprise at the sudden attack, the pack responded in trained unison, their power fists finding purchase and crushing the terrible thing into violet chunks.

On the other side of the battlefield, a space wolves drop pod descended to the planet's surface just behind the enemy line. Clouds of smoke obscured the enormous venerable dreadnought as he stepped from the rocket pod and prepared to fire. Heavy bolter fire from the battle tanks and bike pack dropped several rubric marines nearby as their attendant sorcerors turned their horrible magics on the shrouded dreadnought. 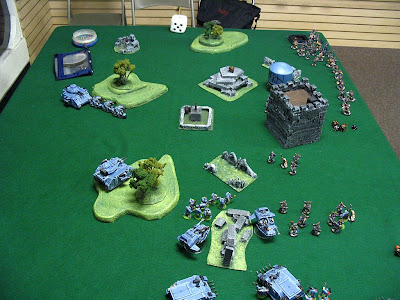 Despite the loss of their leader, the Sea Wolves prepared to counter-attack. They would need to close the distance between them and the enemy in order to avoid the deadly magical bolter fire now so thick in the air. As a land speeder flew overhead bathing the enemy in flame, the blood claws squad and the rune priest waded into the traitor terminators, destroying several of them and sending the enemy into disarray. In mere moments the confused survivors had been cut down and the victorious wolves stepped back behind their rhino to regroup. Meltagun fire from the surviving grey hunters and a second landspeeder cut down the last slaaneshi witch. In the distance, the venerable dreadnought smashed into a squad of rubric marines, killing several. An enormous warp construct slowly approached the melee, its arms already forming cutting torches and saws in anticipation, the dreadnought whirled and sent the beast flying with a single hit from its oversized claw. The tanks and bikes continued to fire into a squad of rubric marines that were now crossing the battlefield to assist in the fight against the grey hunters and blood claws. Suddenly a pack of wolf scouts emerged from cover behind a third unit of thousand sons and charged into them. Though their sorceror leader downed two of the scouts with his warp weapon, the scouts continued their ferocious assault and destroyed several rubric marines. 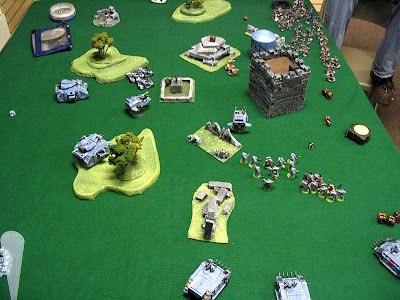 Most of the enemy witches had been destroyed, but the wolves continued their attack, desperate to destroy any trace of their ancient nemeses. The blood claws, grey hunters, and wolf scouts brought down the last rubric marine squad and sorceror, as the dreadnought continued to send enemies flying, including a unit of obliterators that teleported in nearby. The incursion on Kriegsmie had been stopped for now, and the Sea Wolves returned to their transports.

Thanks to Robert for bringing his beautiful army up to BFG for a fun 2k annihilation game Thursday night. He had some bad luck at several crucial moments, and the space wolves were able to grab and hold on as only they can, wiping out the thousand sons to the very last dusty zombie. I think they would have had a much harder time against his usual 'ard list, what with all the obliterators and lascannon havocs. Anyways, good game, it's always fun to send two fully painted armies against one another no matter the outcome.
Posted by bullymike at 1:13 AM

Looks like a fun game, nice pics to go with the story.

Indeed, there is something to be said for seeing two completey (and might I add well done) painted armies fight it out regardless of the outcome.

How does the "anchient enemies" special rule work? Do you just get prefered enemy against the Rubric squads or anything with the mark?

Sons of Russ vs. Thousand Sons, doesn't get much more epic then that. How did the 4+ inv. saves and inferno bolts effect you? Rubics with the 24" range shot on the move seems kind of scary.

Did you know you can shorten your long urls with LinkShrink and make money for every click on your shortened urls.