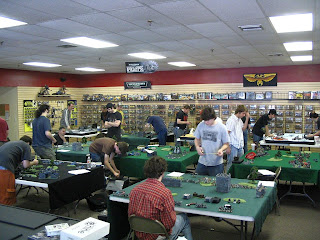 There were 20 people up at the BFG hobby tournament on Saturday and a wide variety of armies, including necrons, eldar, tau, orks, nids, DIY and Ultra marines, both pre- and post-heresy thousand sons, and mechanized guard. There were three interesting missions that built upon each other and had each player pick a unit to be the “unsung heroes” that could earn points by surviving each game and accomplishing certain objectives. I took my current 2k wolves list, with one of my hunter units (the one with the big banner model, led by the battle leader) being my heroes:

I had a good start with full points in the first round but lost my other two games by large margins. Zach’s Mech IG won first place, Chris’ pre-heresy Thousand Sons won second, and Brad’s Orks won third place. I won best painted and grabbed yet another vyper for my Saim Hann. 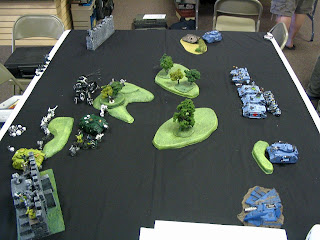 My first opponent was also named Mike, a real nice guy who was coming back to the hobby after a long hiatus. He had a mixed force, consisting of a jump pack tzeentch sorcerer, a tzeentch demon prince, a couple of large marine squads with a missile launcher or a lascannon, three chosen squads with four plasma guns each, a defiler, a vindicator, and a lascannon predator. He set them up in a line along his deployment edge, while I mostly butted my rhinos and fast attack units up behind the center terrain piece with my predators anchored on both ends. This was the only game where I was able to effectively set up the castle and concentrate tactic I’ve been working on with this army. The rhinos and terrain screened out the worst of his firepower while the infantry took cover and poured short range fire into anything that came near the center. The wolf scouts came in and disrupted several of his rear units. Late in the game, his sorcerer and demon prince jumped into a grey hunter squad, but were unable to inflict much damage and eventually fell to frost blade and power fist attacks. I accomplished all three objectives and got both bonus points. 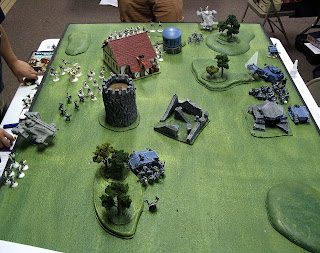 Jorge was playing a well-mixed tau list with a battlesuit HQ, another two or three battlesuits, four or five fire warrior squads, a big kroot squad, a pathfinder squad, a stealth suit team, six vespids, a hammerhead, a broadside with shield drones, and two sniper drone teams. The mission also had the “escalation” rule in effect, so most of his army started on the board, while I only had my two characters on foot hiding terrified behind terrain waiting for the rest of my forces to arrive. My bikes, dreadnought, predators, scouts, grey hunters, and landspeeders all came in the second turn, but since they had to start at the table edges, they were unable to make much of a dent in anything but the kroot, and I slowly lost units to scalding fire from pulse rifles and railguns. I also wasted the scouts attacking a much cheaper fire warriors unit, who broke immediately and left them stranded in the middle of his formation to die quickly the next turn. The blood claws didn’t come in until the sixth turn and by then the game was pretty well decided. He accomplished all three objectives while I did none, although my unsung heroes did survive the game. 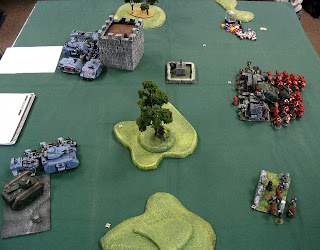 Brian was my third opponent, and he had his usual DIY marine chapter list with two jump HQs, two double-AC terminator squads, two small tac squads, two big assault marine squads, a dev squad with missile launchers and a lascannon, and a whirlwind. I went first, moving up my rhinos to form a wall in front of the artifact objective. The few early shots I took at one of his tac squads didn’t do much. On his turn, he wrecked both grey hunter rhinos with smoke and exploded the blood claws’ rhino (without smoke) hiding behind them. He also destroyed one of my predators. So for my second turn, all my squads were down three or four marines and pinned in place. We played a couple more turns but I honestly don’t remember what all happened, other than his assault squads inflicting heavy damage to my infantry and his terminators shredding everything else with their assault cannons. I was just too bold moving my vehicles right in front of his mass shooty bits, plus he was rolling very well while I was not. Basically it just got worse and worse until I gave up. Needless to say, he accomplished all three objectives while the wolves changed their diapers and headed back to the Fang.
Posted by bullymike at 9:46 PM

Nice reporting, I'd love to see some pics of the armies there that day... especially your Wolves.

hey thanks. a group pic of my wolves is coming, hopefully with a battle report. are you an austin gamer, or an out of towner?

and next tournament I'll try to get more shots of some/all of the other armies when they set them up for judging. :)

you left the attack bikes off your army list

Congrats on getting best painted... somehow you always manage to get that. :)

"somehow" certainly did not mean undeserved! what I ment was you manage to get that award no matter what army you bring which is really sweet. Those decales really payed off.

Did you know you can create short urls with Shortest and make money for every visitor to your shortened urls.