There were 11 of us up at DL on Sunday, including a couple of new younger faces I didn't recognize but mostly regulars. There was a great mix of armies present: Eldar, Ultramarines, Orks, Dark Angels, Demonhunters, Chaos, Tyranids, my own Witch Hunters, and maybe one more race I'm forgetting. A few were tightly tuned, others not as much. I had a great time and got to play three interesting games against cool people. I played pretty much the same army as last time, minus one guard infantry squad, the inquisitor and retinue, and all of my precious assassins. As it turned out, I didn't miss them all that much, since all three opponents were more about shooting than horde or assault. I had a strong terrain advantage for at least the first two games, as almost all the tables basically consisted of two rows of cover separated by a 20" no-man's land. Great for me, since I was usually able to set up with good lines of fire and screen my exorcists from anti-tank, but maybe a little boring. I slipped up and forgot to hit and run with the Seras at a crucial moment in the last game, but otherwise I was able to remember and apply the sisters' rules and tricksies fairly well. First place went to Nick and his Storm Reaver space marines, second place went to Brendan and his Dark Angels, and I took third place. I picked up a box of dire avengers that will round out my 2k Saim Hann army. More on that tomorrow. 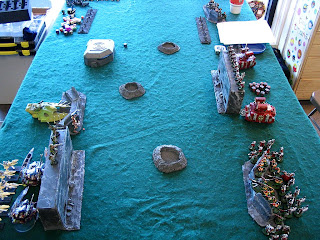 I played against Marshall in the last DL tournament, and come to think of it we played annihilation that time, too. For this game he had an avatar, a couple 3-man jetbike squads, a squad of guardians in a wave serpent, 5 or 6 fire dragons, 5 or 6 rangers, 5 warp spiders, a vyper with a scatter laser, two kitted-out falcons with scatter lasers, and a wraithlord. I rolled to go first and immediately took down the wraithlord with the exorcists and lascannons, as well as a ranger or two with the retributors. I may have wounded the avatar once too. He advanced with his mobile elements, shooting up guard or sister squads with his skimmers and their passengers, but my return fire usually cut the attackers down quickly. I just tried to shake or stun the skimmers first in every shooting phase and put any remaining guns into his infantry, until the vyper and falcons were all he had left. The avatar wasn't able to get within shooting range before I fried him with lascannon fire. My exorcists did really well, thanks to me rolling at sixes for the missile count at least twice. I tried to advance the seraphim and canoness, stopping briefly to wipe out the warp spiders and fire dragons that had dropped in front of my gunline, but the seraphim had to make too many saves and actually had to regroup with the spirit of the emperor before hiding for the rest of the game. The canoness, however, made it all the way across the table to light into some jetbikes and wipe them out in close combat. Witch Hunters win, crushing victory. 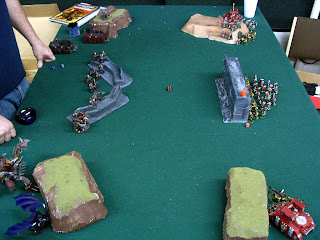 I also played Brandon's chaos army at the last tournament. This time he had a cool-looking betentacled tzeentch demon prince, a deep-striking squad of 6 terminators, a dreadnought, two squads of 10 marines with rhino transports, three obliterators, and a defiler. We both set up our firing lines in hard cover, with the exception of his demon prince, who came flying over on my left flank towards one of my exorcists and a guard platoon command squad. He took three wounds along the way, and managed to destroy the exorcist's main (only) gun, but lascannons finished him off before he could do any more damage. A lucky break for me, as his wind of chaos and warptime would have probably rolled up my line. Slowly but surely I picked the rest of his forces off, destroying everything but the defiler and a few marines (IIRC). I had two units near the center, giving me enough points to win by a large margin. Witch Hunters win, victorious slaughter. 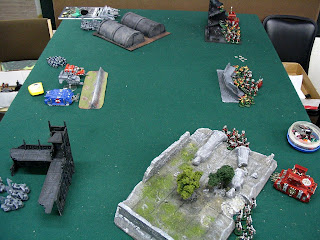 Brendan had a dark angels force consisting of Belial and a bodyguard of terminators, the landspeeder master of the Ravenwing, a veteran squad in a rhino, three more assault cannon/multimelta landspeeders, two or three attack bikes, and a couple squads of bikers. We went into the third round playing at table 2, which had somewhat of an awkward set up for me. He more or less went for a refused flank with his fast units, though it was really the big piece of terrain in my right corner that allowed him to post up next to my forces with his speeders and attack bikes and avoid the rest of my shooters. It probably would have gone a lot worse for me but he was a little hesitant in the early turns and I was able to drop a few units piecemeal before he made his main attack. Once that happened, though, it was only a matter of time for the troops on my right side. He did pop an exorcist first turn, though my second one survived to do plenty of damage on its own as well as drive into his deployment zone for recon points. My seraphim traipsed up on my left side, falling back once only to regroup and continue the assault. Belial and a few assault terminators eventually wiped them out, but only after suffering significant losses themselves. It was a very interesting game, and together with the near-disaster in the second match, I really need to work on a way to prevent fast units from flanking me so hard. I have a few tactics I'm going to try the next time I use the coed gunline. The game ended in a draw.

For next Saturday's hobby tournament at BFG, however, it's going to be the Wolftime. Hopefully I can get them all painted by then.
Posted by bullymike at 6:41 PM

wow a picture for the third battle... i would not have guessed. :)

Congrats on winning third. It is nice to see there weren't any MECH ELDAR there hahaha.

Wow, seems like you had a completely different (and much more positive) experience at the tourney than Bushido Red Panda...congrats on third!

Did you know that you can create short urls with AdFly and receive cash for every visit to your short urls.