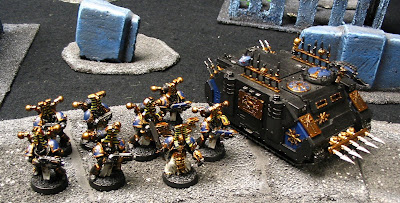 I finished up my thousand sons this week, as well as their rhino and a third obliterator (center). I tried to keep at least a bit of a motif between the berzerkers and the thousand sons, with the same bronze and black but emphasizing some of their own traditional colors. I have 8 plaguemarines already painted in a generic black legion look but now I want to give them their own distinct look as well. I also need another old-style rhino, if anyone out there in town has an extra one lying around; my plan is to nurgle that bitch out and have three cult troop units that can hold their own but work well in combination. Later I might get some noisemarines and complete the circle. Anyway, I still need to touch up the thousand sons rhino a bit but it matches them pretty well.

I like how the third obliterator turned out. I used a plastic space wolf head with a closed mouth instead of the berzerker faces I used for the other two. These are great units, too bad I only have three of them. I probably won't get any more though.
Posted by bullymike at 8:57 PM

Looking good! I especially like your extensive use of the chaos vehicle stuff on your rhino!

I want a good look at the "Khorny" Rhino.