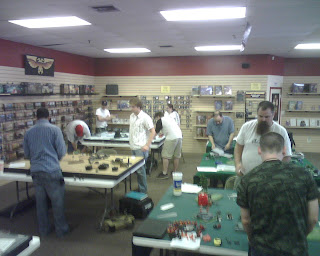 It was time again for another 'eavy tournament up at Battleforge this weekend. Something like 12-14 people showed up with all the cheese they could carry; big bugs, mceldar, double lash chaos, and triple monolith necrons were all in full rapelicious effect. I waded into them with my inquisitorial army, earned a single win and went back home to the drawing board. Third exorcist here I come. The retributors will be broken down to make a third sister squad. I'm also ditching the Callidus for good. Maybe I just don't use her right but she never seems to last past a single round of combat, c'tan tech or no. Last month somebody requested more pictures of the other armies in battle, so here's a few: 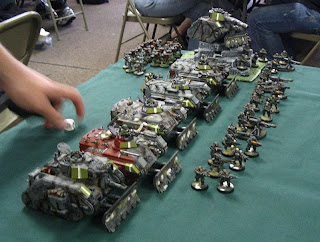 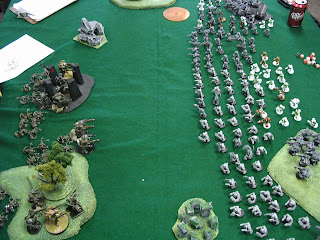 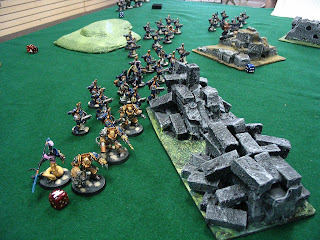 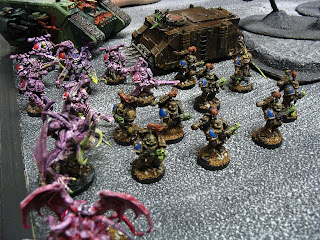 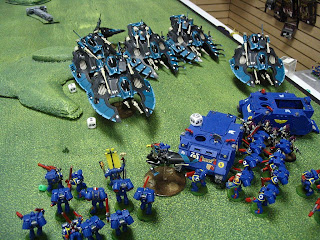 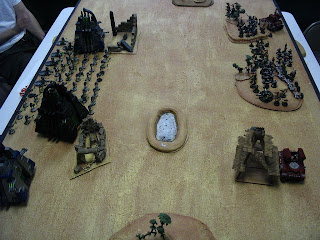 I drew Jay's triple 'lith list for the first round. I destroyed all of the immortals and two of the monoliths but the bulk of the force made it close enough to my lines to bring the megagauss storm to bear. I accomplished the secondary objective, Jay got the first and second objective, and we both earned a bonus point. 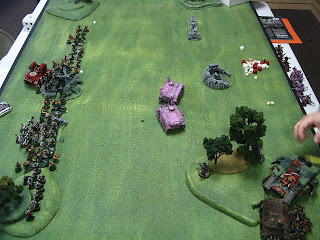 Primary Mission: Table quarters
Secondary Mission: Victory Points
Tertiary Mission: Have fewer scoring units than your opponent at the end of the game
Bonus Points: Have a unit in the enemy deployment zone

After like a year or two of missing each other at plenty of tournaments, Thomas and I finally faced off. For this tournament he was fielding two flying demon princes with lash, two noise marines in rhinos, a thousand sons squad in a rhino, a berzerker squad in a land raider, and two obliterators. He got first turn and moved up with his transports and demon princes. One fried himself a wound right off the bat with a failed perils test, and the other couldn't see to lash anyone. I wrecked all three of his rhinos through their smoke launchers, killed several passengers, and pinned them all. He managed to lash and assault a guard and retributor squad but all my heavy weapon fire wiped out one of his units after another and he conceded. I achieved the primary and secondary missions, with a bonus point, and he got the tertiary objective. 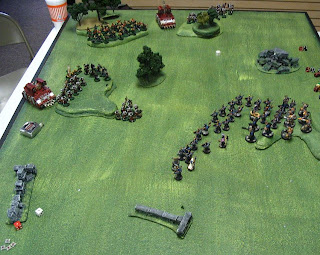 Robert definitely made up for our last game and totally wrecked my shit with his two walking lash sorcerers, 32 thousand sons, and nine obliterators. I might have done a bit better by first placing a sacrificial unit near the table center (in order to push his forces back 18") and deploy the rest far back in my own hidey hole. As it was he was able to start lashing me right off the bat and plasma and inferno bolts ate me up a squad at a time. I conceded sometime in the fourth round.
Posted by bullymike at 10:01 PM

Nice report, lots of good pictures too. Looks like there were some really nicely painted armies there.

We have to get another game in, the amount of death to occur through glancing hits made me a sad panda hehe. But at least Robert got some love for Chaos.

Nice report as usual and I hope to see you at a tournament soon. I liked seeing some of the other armies out there too. Zack if you are reading this nice job. ;)