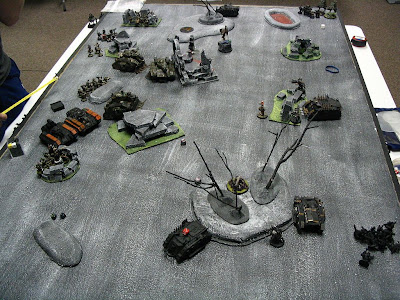 I went up to BFG last night to play a game against Kings and his Bug-hunting guard veterans. At the last minute we decided to play using the 5th edition rules, in which I’ve become fairly well versed over the last week or so (I went through a copy of the rules line by line, noting all the differences). I have issues with the true LOS rules, mostly with the way area terrain is handled. Given the highly variable nature of area terrain (like woods or ruins) from piece to piece, I think each should be considered uniform within a defined border, rather than consist of “elements” (e.g. trees, stone blocks, whatever) that were previously representative and could sometimes be repositioned for ease of placing troops. I’m totally fine with being able to shoot through it, but I think it should be “uniformly translucent,” where you can always see units behind it but they always get a cover save. However, seeing as how you can wipe out an entire unit with shooting when you can only see one trooper, it might be a wash in the end. I just smell the potential for snarkiness in the air is all. Maybe it will make more sense in time; I’m still getting used to it.

All that being said, the new rules are pretty awesome. I played my Cult Cars list, which besides 8 of each cult troop type in rhinos, also includes a flying lash demon prince, 8 terminators with combiplasmas and mark of slaanesh, 10 lesser demons, and 3 obliterators. Kings had a command squad, a heavy weapons squad, two or three infantry squads, a couple chimeras, several storm trooper squads, some hardened veterans, 4 sentinels, 2 demolishers, and a hellhound, and he was using as always chem inhalers. We played Seize Ground using the pitched battle deployment zones, with 4 total objectives. I set up the plaguemarines by their lonesome on my far right flank, with the other rhinos and obliterators guarding the two objectives on my left. The new deployment rules, where one person deploys their whole army before their opponent does the same, works out in a very interesting way. Since you know basically who’s going first, it makes it easier to decide whether to leave something out in the open or hide it behind terrain.

The first thing I realized was how great rhinos (or transports in general) are in 5th edition. If you can keep them decently obscured, they’ll always get a 4+ save against any damage (and I was rolling pretty hot at the beginning of the game), and even if they are destroyed or blown up, fearless cult troops don’t give a damn and outside of 1 or 2 casualties they can walk away unharmed. Plus you can capture objectives from inside transports now. One downside is that they do count as an extra kill point for your enemy in the annihilation mission type. After these things sunk in, I decided to hunker down with the thousand sons and berzerkers, and probe forward with the plaguemarines on the right and use their icon to bring down terminators and demons to try and grab a third objective. I made a push on my left with the noise marines but their rhino’s smoke launchers failed to protect them and kings rolled a ‘6’ to explode the transport. The next turn they ran at a nearby squad but were cut down before they could reach them. Kings used the outflank maneuver with his sentinels but besides inflicting a single wound on an obliterator, they were mostly ineffectual. Some deep-striking storm troopers killed one of the other obliterators, but they were wiped out in turn by shooting from the thousand sons and berzerkers. The plaguemarines accomplished their mission, with help from their deep-striking friends, but as feel no pain no longer protects them from plasma fire, they were eventually wiped out and I had to depend on the lesser demons to try and hold the objective.

We kind of screwed up the variable game length deal (mostly my fault for thinking I had gone first), so I tentatively won, but it was pretty close to a draw. I also forgot that though troops alone can capture an objective, ANY unit can contest an objective. That makes things pretty interesting late game as you try desperately to fend off any threats while keeping at least one guy in the squad alive.

Anyway, lots of fun, and I can’t wait to play the rules using all of my different armies. I’m especially eager to play with my genestealer bug list and see how well outflanking works out for them.
Posted by bullymike at 8:32 AM