I hustled to assemble (mostly) and prime up my Saim Hann army for a 1750 point Dragon's Lair tournament last Saturday. The group was made up of mostly familiar faces with generally well-balanced armies. I had an autarch with lance, mandiblasters, fusion gun, and jetbike, 5 squads of 3 guardian jetbikes with a shuriken cannon in each, 10 dire avengers in a wave serpent with scatter lasers and a shuriken cannon, four shining spears including an exarch with a shuriken cannon, hit and run, skilled rider, 2 vypers with bright lances, shuriken cannons, holofields, and spirit stones, and 3 fire prisms with holofields and spirit stones. I'm not sure about the autarch and shining spears; they are really fun when they go off but no consolidating in assault means I always need to hit and run when possible and try to get far enough to take cover. I may go back and try the farseer/warlock tack a bit. I'm anxious about how the jetbike army will perform in 5th, but whatever, I still think it will be awesome after I get done painting the bastard. 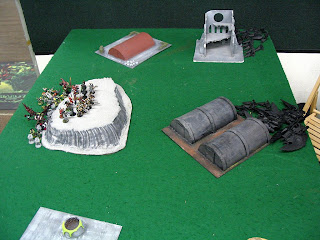 This was about as good as it got all day for the Saim Hann army as far as mission choice went. I believe my opponent's name was David (could be wrong there), he was using a hodgepodge of chaos models to represent 2 flying lash demon princes, 2 small noise marine squads, 2 big raptor squads, and 6 obliterators. I flanked hard to my right with everything but one of the fire prisms and he pretty much hid out behind the hill in his deployment. I was able to slowly pick off his troops a squad at a time as I advanced almost everything into his deployment zone. In the fifth turn he started to move one of the princes and raptor squads towards my deployment but it was too late to cover that much ground and eldar won, victorious slaughter. 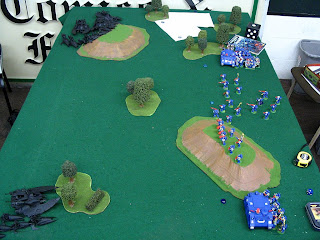 This was a weird but very fun and even game. Frank had Tigurius, a command squad with 2 lascannons and tank hunters, 2 small las/plas squads, a missile launcher dev squad, some assault veterans in a rhino, some assault scouts, 3 bikers, a jump pack assault squad, and a tac squad in a rhino. The battle proceeded differently on either flank. The autarch and spears were pinned down for the first couple turns, but were able to pounce out on the bikers and the tac squad. Eventually Tigurius fell to a shining spears assault. The marine bikes were also wiped out but the eldar were tied up in assault for the rest of the game until they were destroyed. On my left side, jetbikes and dire avengers engaged the scouts and veterans with casualties on both sides. Meanwhile the fire prisms continued to pound holes in several units including the assault marines and devastators. It ended up with Frank ahead by 3-400 points, enough to secure a solid victory. 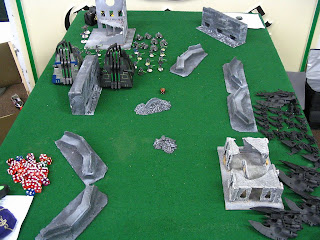 Another third round match-up with Jay and his purple necrons. I destroyed a monolith on the first turn and inflicted decent casualties on the warriors but he was making great WBB rolls and good use of the surviving monolith and destroyers. He downed 2 holofield prisms in one turn and things went downhill from there. Jay ended up winning big in the end, securing one or both quarters and coming out far ahead in victory points.
Posted by bullymike at 3:24 PM

Hey you left a miniature at BFG, it is in the case. It is one of the cool sisters with a big cape flying or somethin.

Nice, to read about some Saim-Hann action. What about star cannons? Expensive yes, but they would have mowed down those smurfs, throw in the farseer guide and it would have been uber killer. Necrons? You, know, they have been the hardest army I hav ever faced with my Saim-Hann and account for th most of my losses. 2 Monoliths are even worse.

Actually, leaving the Farseer out was probably his biggest problem. The Ghosthelm pretty much shuts down psychic powers. A Librarian shooting out FoTA at three bike squads without regards to line of sight can be brutal.

I should know, I was the Smurf player....

Did you know you can shorten your long links with Shortest and make money from every click on your shortened urls.