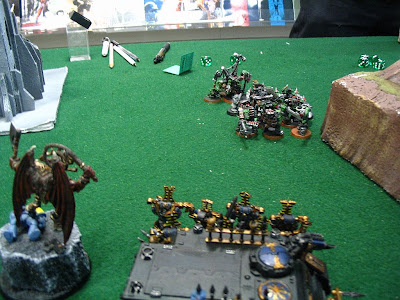 Saturday was the first half of the 4th to 5th Edition changeover series being held at Dragon's Lair. You play the same army at two different weekend tourmaments using 4th edition rules in June and 5th in July. I took the Cult Cars list, which lately consists of:

There was a large turnout, with over 20 players using a fairly good variety of armies including dark angels, black templars, chaos space marines, chaos daemons, eldar, necrons, and a ton of orks. I got plenty of ork experience, as I drew greenskins for every one of my three matches. I didn't take any pictures out of pure laziness, sorry about that, they weren't judging painting this month anyways. I'll try to get more next time.

Game 1 - The Bikez - Seek and Destroy

Sean had warbosses on bikes with power klaws and bosspoles, two squads of 10 biker nobz with docs, waagh banners, several power klaws each, a squad of boyz in a truck, and three looted wagons with big kannons. It was a pretty great army, and I learned firsthand how tough it is to take on so many invincible nobz (don't lash them any closer to you, no matter how much firepower you think you have!). It took my entire army shooting and chopping to the last to bring one squad below half and finish the other off completely. The berzerkers stood tall before the boyz, fighting them back and wrecking their truck. I didn't have much firepower to spare on the looted wagons, as I was trying desperately to shoot up nobz for pretty much the entire game. By the last turn, my whole army had been slowly wiped out to the man. It seems best to try and split up the nobz as much as possible, because if they strike together at once there's not much that can stand up to them. Orks win, crushing victory.

Mark had a big mek, old zagrot, a 30-strong squad of hard boyz, an 8-strong squad of nobz, two deff dreads, two squads of 3 kans, some jetpack boyz, and a squad of gretchin. He was actually about 200 points shy of 2000, so he had a bit of a handicap to overcome. Also I don't think he was using Zagrot to his full potential, because I think he's supposed to roll a psychic power every turn or something, and he basically just ran forward leading the hard boyz squad. I massed all the cult troops into the middle and used them to bring in the terminators and demons. I didn't have much trouble fighting off the dreads, kans, and jump troops, but it takes so long to fight through all those ork boyz. I lost all of the berzerkers but that was about it, and I had plenty of my own scoring units in the middle. Chaos wins, victorious slaughter.

Colby had a variety of classic ork units from the new codex, including 2 big meks, flash gitz, lootas, snikrot and some kommandos, burna boyz, 2 battle wagons, one or two units of slugga boyz, and a deff dread. This was probably the most exciting game of the three, with all of my units working very well in unison to fight off some scary assaults. Early on one of the wagons dropped off the big unit of burnaboyz who promptly wiped out the noisemarines with shooting and assault before consolidating into the plaguemarines. Between turns spent lashing enemy units around, Toggog flew over and helped the plagemarines fight the burnaz off. The terminators, obliterators, and thousand sons destroyed or disabled everything that came near, including a bunch of slugga boyz, a deff dread, and both wagons. At the end, neither of us could claim any table quarters but I was well ahead in victory points. Chaos wins, crushing victory (maybe solid victory?).

Two wins made it a pretty great day even after the initial big loss. My impression so far is that the chaos army is even better in 5th edition. I will definitely try to play several games this month in preparation. Thanks to Larry, who was running a great tournament despite the chaos of such a large turnout.
Posted by bullymike at 3:24 PM

I hope sean wasnt using those small old school trucks as battle waggons... are you sure they werent gun trucks?

Anyway I had fun at the tourni too. Even though I had to sit out the first game.

See ya at the conclusion.

he was using them as looted wagons. 11 armor all around... he said they don't have models for them, i thought that vehicle referred to the looted leman russes or basilisks but whatever.

i don't have to tell you that you sat out the first game because you were late! show up a little early next time you douche

I'm beginning to think the "all bike, all the time" Ork army is the new cheeze. *sigh* Oh well. Sounds like you had a good time!

Damnit, wish I could have been there to limp around. Would have brought undivided chaos, and seen how it worked out haha.

But glad it worked out well. Orks are a pain, and I think Sean would have been better suited with Snikrot instead of looted wagons. They are kinda ass, I guess they might be better in 5th edition. Maybe that means I loot some up hahaha.

well the models he used will be great in 5th because they are so fucking small he can hide behind everything...

Lets just say sean and I do not see eye to eye as far as modeling goes.

Oh and Mike I got there before 11. Maybe only a few minutes before 11 but you guys started early.

Did you know you can create short links with AdFly and earn money for every click on your shortened links.