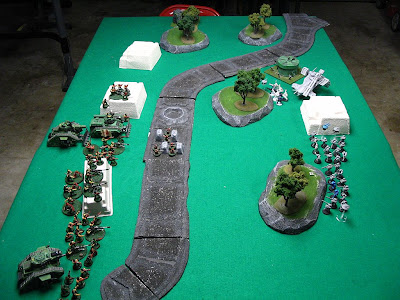 My friend Jacob brought over a 1500 point Tau force and we played a game using fifth edition rules. We ended up rolling the Command and Control mission type, deploying with long table edges (I still have yet to play table quarters or dawn of war). I had a command squad, a mortar squad, 2 5-man drop-troop veteran squads, 6 ratlings, 2 infantry platoons with grenade launchers, plasma guns, and autocannons, a hellhound, 2 lascannon sentinels, a leman russ with heavy bolters and a demolisher with plasma cannons. Jake had a command HQ suit with 2 bodyguards, an ethereal with honor guard, another 3-man suit squad with twin-linked plasma, a 12-man squad of fire warriors, a 6-man squad of fire warriors, and a hammerhead. This was his first game ever with the new rules, and mine using the guard, so there were a few things that we learned as we went along. One thing that stands out in my mind is how bad ass blast weapons are. I was thinking I would take the plasma sponsons off of my demolishers because of the new movement/shooting rules, but now I’m not so sure. Ordnance and blasts pack a hell of a punch! Even the frags from the grenade launchers in all my command squads were blowing all kinds of shit up. My reserves were all slow to arrive but they performed well once they got there (one vet squad scattered into the hammerhead and was sent back into reserve for another turn, lucky gits). The ratlings were killed right off the bat, mostly because they were the only thing in range and LOS for his whole army, so I have no feeling on how much better the sniper rifles are now. Similarly, my mortars were scattering unusually high distances and so I don’t think I got a very good picture of how good they are either. Tanks are so hard to destroy. It took 3 turns of short range fusion gun hits (all penetrating) from the HQ suit squad to blow my hellhound up, and his hammerhead was only ever able to immobilize the demolisher with the railgun solid shot (though it did blow up plenty of guardsmen with the big blast shot). I ran half my infantry squads over towards his table edge, and together with the sentinel they charged into the second suit squad, eventually killing them in assault and taking his objective as well as my own. Running is awesome! He was able to inflict plenty of damage on me with all the S5 AP5 stuff but by the fifth turn I had wiped out most of his army and we called it.

Overall I would say the Guard performed very well. I moved my guardsmen squads quite a bit in this game but I doubt I’ll be doing much of that in the future. Most of the time I’ll probably keep my infantry and battle tanks covering my own objective(s) and use my vets, sentinels, and hellhounds to contest enough enemy objectives to put me over the edge into a win. For this game I was not facing a very strong assault army, which is what I’m mainly worried about As long as I can whittle down a close combat army down to a couple of squads that make it to charge, I should be able to fire on them once they win combat and minimize my own losses. The worst case scenario is having my own squads survive a turn after being charged only to lose in the enemy’s turn, freeing up the enemy to keep chewing me up a squad at a time without being able to shoot at them.
Posted by bullymike at 4:32 PM