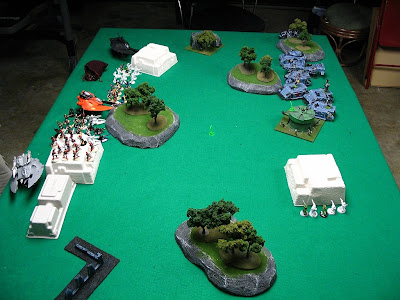 I played a 2000 point game against Jacob last night using my current space wolves list, which basically consists of: wolf guard battle leader with frost blade, rune priest with frost blade, venerable dreadnought with an assault cannon and heavy flamer in a drop pod, five wolf scouts and a wolf guard leader, two squads of nine grey hunters in rhinos, nine blood claws and a wolf guard leader in a rhino, three attack bikes, two melta/flamer land speeders, a vindicator, and a predator annihilator with heavy bolter sponsons. Jake had an avatar, jain zar, a big squad of banshees in a wave serpent with a rocket launcher, a small squad of harlequins riding in a falcon with a star cannon, three big guardian squads with two star cannons and one rocket launcher, one big dire avenger squad, a fire prism, and a battery of three D-cannons. We rolled for long edge deployment zones and the seize ground mission with three objectives. With help from the venerable dreadnought, I won the roll for first turn and chose to go second.

The vindicator was immobilized in my first turn trying to move into cover for a better view. As it was he would only be able to launch shots at the taller avatar for the rest of the game. On my right side, our forces exchanged heavy fire. The land speeders and attack bikes brought one of the guardian squads down to a man, and the predator put an initial wound on the avatar. His avengers and wave serpent immobilized one of the land speeders in return and killed two of the attack bikes. Later, the predator immobilized the falcon hanging out in his backfield, while the other land speeder immobilized the wave serpent. I’ll say this about fifth edition, I’m already seeing a lot more immobilized vehicles lying around shooting at each other!

With mostly impotent vehicles strewn about on the right side of the battlefield, the focus shifted to the center as my hunters and blood claws emerged from their rhinos. I really wanted to bring down the avatar so I charged into it with the rune priest, one grey hunter squad, and the blood claws. Immediately the avatar struck the rune priest down, and my power fists did only one wound in return. Both squads held, however, and with the big wolves squads tied up with the avatar, it was a perfect setup for a counterattack from the harlequins and howling banshees. They jumped out of their respective transports and wiped out both squads before I could do a thing. Some subsequent shooting brought their numbers down a bit but it was too late for 2/3 of my scoring units. I was left with one unit of grey hunters, who retreated in their rhino to the objective in my own deployment zone. My scouts and dreadnought both come in on the third turn, and while the scouts shot and did zero damage to the D-cannon battery, the dreadnought cooked at least six or seven guardians and they broke, running within 12” of the avatar on their way back to the edge. The scouts and dreadnought were destroyed soon after, having accomplished very little considering their high points value. However, between the vindicator and the predator I was finally able to bring the avatar down: a serious moral victory for the now quite beleaguered space wolves. At the end of the fifth turn, we were both holding one objective each with the center one disputed by the rhinos. My grey hunters barely held off an attacking fire prism with an excellent plasma pistol shot at the last moment that immobilized the battle tank, keeping it from contesting my home objective. Technically it was a draw, but had we calculated victory points he would have probably come out ahead by a decent margin.

In retrospect I should have played a lot more defensively, maybe staying in my rhinos long enough for his fragile assault troops to expose themselves to concentrated fire. The avatar is a monster. With a shootier army I might not have had such a problem but his proficiency in combat and invulnerable saves gave my usually scrappy space pups a serious run for their money. Were it not for the counterattacking banshees and harlies, I might have won that combat, but they are just too quick and too pointy. I definitely need to stay far away from them in the future. So far it seems like the 5th edition standard game objectives really push you to commit your forces, and with space wolves that can be a very expensive proposition. I still like the army though, and I might end up playing them this Saturday at the BFG hobby tournament.
Posted by bullymike at 10:06 PM

Just realised I didn't have a link up to you guys, where I thought I did. Sorry! Well, you've got one now!