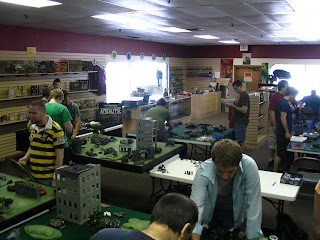 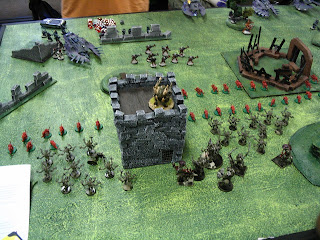 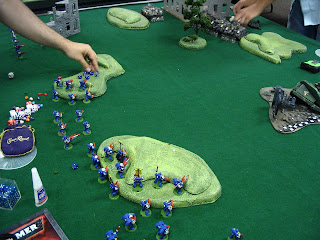 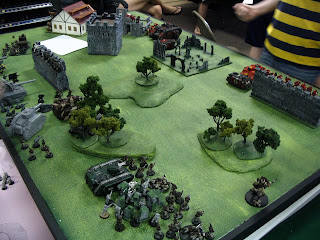 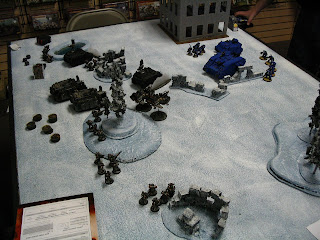 Saturday was the first 5th edition tournament held in Austin, put on by Battleforge Games. There was a huge turnout, with 26 people showing up to play 3 rounds of 2000 point matches using their "hobby" scoring paradigm. I scrambled on Thursday to assemble and paint a second demolisher and hellhound to add to my armored guard force:

I heard some grumbles about the terrain being on the sparse side, but it wasn't so big of a deal for me. Obviously as I was playing guard I had a lot of ordnance love to give, so I wouldn't complain anyway, but the 2 tables I played on had plenty of stuff available for getting saves and LOS-blocking. The true LOS was never an issue with the people I played against, but then again I drew three very friendly opponents so maybe I lucked out there. Everyone seemed to know the rules pretty well and everything went very smoothly thanks to good players and great organizers. After the dust settled Chris' eldar had won 1st, Mike's chaos won 2nd, and I won 3rd place. Thanks to Brandon and Mike at BFG for another excellent series. 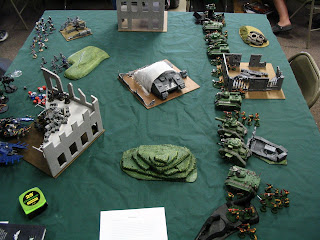 I drew Amar for my first match. He was playing Eldar with Jain Zar, a farseer, 3 big guardian squads with bright lances, 2 big squads of howling banshees in wave serpents, a squadron of 3 warwalkers with scatter lasers, and 2 squads of dark reapers. I had pretty good firing lanes and shot the hell out of the guardians and reapers while he flitted around in my left flank with the banshees wave serpents, causing relatively little mayhem. I used a chimera on that side to shuttle a couple infantry squads between the two quarters. I jumped out with one of them and lit up the farseer and surviving guardians in the large building. Using star engines, he quickly brought Jain Zar's serpent back into his deployment to deploy her banshees and airlift the farseer out in one fell swoop. When they jetted back into my deployment zone I brought it down with a plasma gun, exposing the passengers to their doom. The sentinels outflanked and helped finish off a few guardians. His flanking war walkers did a good amount of damage, wiping out my lascannon squad and command HQ. My veterans deep striked right in front of a few straggler guardians with their warlock and managed to blow the guardians away. The warlock responded by charging in, and after killing two with his wraithsword he routed the unit and wiped them out. I think he kept the banshees in their transports for just a little too long, and by the time they joined the fight I had spread out my units fairly well and had good command of the firing lanes and table quarters. The hellhounds were probably the mvp of the game, immolating scores of guardians with its cover-save ignoring fiery death. In the end I had accomplished all three objectives to his one and scored both bonus points. 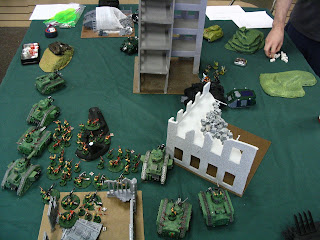 Primary objective: Win by 200 victory points
Secondary: The player who kills the most headquarters will achieve this objective. In the case of a tie both players accomplish the obective.
Tertiary: Annihilation (kill points)
Bonus points: have more than 10 kill points alive at the end of the game

I had played against Mike once before with Space Wolves and had managed to do pretty well against his chaos army. For this tournament he went all nurgle and had 2 flying nurgle demon princes, a squad of terminators in a land raider, a squad of chosen, two squads of 10 plaguemarines in rhinos, a vindicator, a defiler, and a predator annihilator with lascannon sponsons. After he won the roll to place the first piece of terrain, he planted the big building in or near the center. This and a few other big pieces stinking up the middle meant my downfall. I should have just formed up in an L along my table edges and stalled him out long enough to shoot most his stuff, but his templates would have probably devastated me anyway. All of his penetrating hits against vehicles were weapon destroyed or destroyed, while I could only stun or shake them, and since they were possessed it added up to bupkus. Land Raiders are indeed bad ass now, and his terminators were in my lines on the second turn, tearing up squads two at a time until I got enough shots in to break them and send them running. I also brought down one of the demon princes, but it was already too late. His other prince smashed one demolisher while his ordnance and lascannons devastated all my other tanks. He outflanked with the chosen but they came in on the wrong side of the table and never made it into the fight. He didn't need them. He wiped me out entirely in the sixth turn. By killing the one demon prince I was able to accomplish the secondary objective while he got all three and the bonus point. 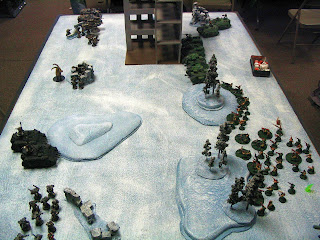 I have totally blanked on my third opponent's name, and that's too bad because he was a nice guy. He was also a really good sport, and coped very well with rolling very poorly at all times while I could apparently miss no cover save or leadership test. He had a really nicely painted DIY marine chapter (the Angry Goats I believe) with a personalized objective marker (a plastic ibex). His force consisted of a librarian with fear of darkness and fury of the ancients, 2 10-man tactical squads, 4 5-man tactical squads with a plasma gun or a lascannon, a 10-man assault squad, 2squadrons of 2 melta/flamer land speeders, and a small devastator squad with 2 rocket launchers. With hellhounds and heavy bolters, I whittled away at the two small squads he left guarding the ibex, while the rest of my army kept his units on my left at bay. He failed a lot of Ld 9 morale checks and lost the still somewhat intact assault squad to a 3d6 fallback after being shot up by the sentinels. I managed to pop one of the rhinos and expose the tactical squad inside (my troop unit objective), and the veterans arrived to chop several of them down before the demolishers and rocket launchers finished them off. His vindicators approached on my right but moved too slow and shot too poorly to really affect the game. He was using FotA the whole game but could never kill more than 1 or 2 in a squad per turn and I always resisted being pinned. I accomplished all three objectives to his one.
Posted by bullymike at 2:15 PM

Considering that the store's terrain ended up split between 14 (!) tables, frankly I'm amazed we had as much terrain per table as we did.


Congrats on third by the way.

Congrats from me as well. Well done!

Oh, and your final opponent was named Tony (GoatRider on AMM, I think). I agree, he was a good opponent and definitely a good sport/player.

good job on placing!!! it went from bad to worce for me but I enjoyed all of my games.
w00t guard.

maybe we will fight this sat.
:)