I went up to DL Saturday to catch a 1750 point standard format tournament. Each of these games would be the last times I ever played 4th edition scenarios in a tournament setting, and probably for all time. I had changed up my eldar list a bit since last month, including the HQ choice and the jetbike squad size. I did like the bigger squads, as they cut down on kill points and more catapult and cannon fire can be effectively guided all at once. The dire avengers are ok but even defend can't keep them alive for all that long under assault. They need fire support to help them cleanse the landing zone first (ideally an objective). I thought the farseer worked better than that autarch overall, but I'm going to ditch doom for mind war since I rarely let anyone be close enough at the beginning of the turn to use the power. Guide, however, works great, especially with the vyper squadron, and together they can drop 4-5 marines easy together. The mobility worked great against all three opponents, and the holofields prevented any of the prisms from getting worse than a destroyed main gun. I won first place and expanded my imperial guard armor collection. 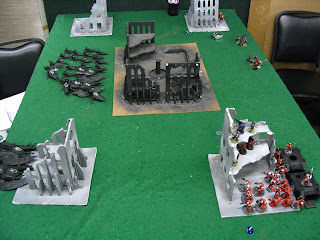 Brian had a detachment of his DIY space marine chapter, including a jump captain and jump chaplain, a terminator squad with double assault cannons, a large assault squad, two small tac squads in rhinos, and a devastator squad with rocket launchers and lascannons. Recon been berry berry good to me when I use this army, and this one was no exception. I disabled the rhinos and broke the devastator squad early on, and swept the bulk of the bikes and tanks over the big piece of area terrain in the center to his right flank. The farseer unfortunately succumbed to perils after trying to doom a unit that was out of range to begin with. His captain barely survived a huge volley of fire that wiped out the assault squad and the chaplain, and was able to charge into the dire avengers. He wiped them out in one round, but a nearby jetbike squad shot and charged him, finally dispatching him with a singing spear. I lost two fire prism guns but not the tanks themselves, and with plenty of my forces in his deployment zone at the end of the game and nearly nothing left of his army, I earned a victorious slaughter. 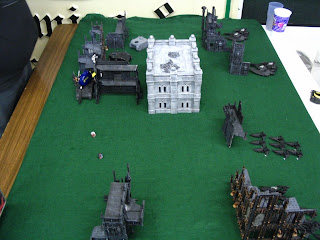 Kirk was playing with a jump lord with a bloodfeeder, three bererker squads in rhinos, two marine squads with a plasma gun, lascannon, and icon of khorne, also in rhinos, and one obliterator. He started out jammed up good in a bunch of ruins but moved his forces forward around the center piece and towards my deployment. I was able to get great shooting lanes on him from the beginning and whittled down two or three units early on. His lascannons were able to drop my wave serpent and kill five of the dire avengers in the ensuing crash, but the rest of my crew escaped unscathed and I earned a crushing victory. 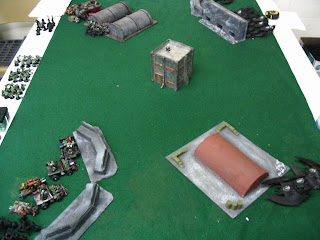 Colby had a very different force than at our last match-up, this time using a warboss riding with bike nobz, two trukks of 12 boyz, a trukk of 12 hardboyz, two squads of two rokkit buggies, a big squad of rokkit boyz, and a battle wagon with a zzap gun and big shootas holding a big squad of tankbustaz. This game was proceeding fairly well for me, until a boyz squad pulled up in front of my hiding bikes in the second turn, moved another 6" with a great Waagh!, and... failed a difficult terrain test to assault me with a 2. I would have lost at least one of the jetbike units and my formation would have been thrown into great dissaray, but the dice gods smiled and my units surrounded them and wiped them out instead with guide and doom-enhanced firepower. Once again the wave serpent was brought down, and once again half of the dire avengers inside were killed in the explosion. They were able to disable and immobilize one of the buggie squads but otherwise laid low in the back. I put a lot of effort into avoiding the nob bikes for most of the game and finally killed the warboss and brought the unit under scoring in the fifth turn. I plowed my prisms and surviving bikes into the center and wrapped up a crushing victory.

Here's a bonus pic from a nearby game. Jay's Deathwing fights Colby's Orks: 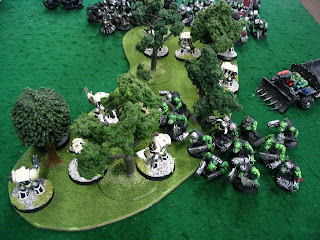 Posted by bullymike at 8:20 PM

Thanks! Now I have to remember that orky crap forever!!! :P

are we going to see the flying eldar at the BFG tourni next week...? first 5th tourni in ATX, NTM they just made a bunch of new terrain. :P

no probably neither SW nor SH. most likely chaos.

Refreshing to read some Saim-Hann battle reports besides my own. Hopefully more?