Saturday was the second installation of the 4th-to-5th edition transition tournament at Dragon’s Lair. Here’s the report and army list from the first week. A few people dropped out of the second weekend, so there were only 9 of us this time grinding it out for the glory (and double prize support). Tournament organizer Larry said we were using a tourney points system similar to what they’re discussing for GTs. We would play each standard mission once over three rounds, with everyone using the same deployment zone each round (and # of objectives). The winner of each match would get 15 victory points and the loser 5, possibly modified by winning with many more objectives than your opponent using some arcane mathematik that didn’t make all that much sense to me. If you wiped your opponent out, you got 20 points instead. Actual victory points were calculated to help out with a possible tie break at the end. Going into the second weekend, I was 2-1 and I think I had placed somewhere in the middle of the pack. This time, Toggog’s marauders hit the ground running and earned three wins for me, putting me in first place when the smoke finally cleared! Objective management was key, and I used my transports in all three rounds to play shell games with my cult troops until the last possible moment. I actually scored fewer victory points than my opponents in my last 2 games, but attrition is practically meaningless when your troops score down to the last man (and they’re all fearless!). 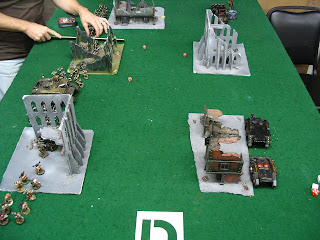 I’ve played against Sam’s chaos before, including once at the first tournament I wrote about on this blog. The greatest challenge is usually just keeping the game moving past four turns. Not an unfriendly guy, but I think maybe his models are so heavy (everything’s been dipped in metal) they just take a really long time to move. He had a terminator lord, five big marine squads with various special and heavy weapons, three dreadnoughts, a squad of three obliterators, a land raider, and a predator with an autocannon and heavy bolters. There were three objectives on the table, two of which were on his side of the board. I won the dice roll and chose to go second, giving him choice of the table edge. The thousand sons and berzerkers camped on the objective to my left, the obliterators fired from cover in a building in the middle, while the demon prince, plague marines, and noise marines moved up on my right to grab a second objective. I brought in the terminators on my right side as well, and they managed to immobilize one of the dreads with their combi-plasmas right away. A second dread fell to the plaguemarines’ meltas. The noise marines were charged by the remaining dread as they camped out on the right side objective, but two of them managed to survive long enough for my terminators to run over and finish it off with a chainfist. The demon prince flew past everyone on my right side, and lashed one squad after another into close combat, wiping out a couple of them quickly before getting bogged down in a third. Sam held back with his land raider until the third or fourth turn, when he jumped a big squad inside and blazed across the table towards my left side objective. In the end of the fourth turn, I had barricaded him away from the objective with the berzerkers’ rhino, and with only 12 minutes or so left in the round we probably should have ended the game. But in the interest of playing five turns (...) I asked Larry to let us play through. In his fifth turn he jumped all his marines out of the land raider, wrecked my berserker rhino, killed most of the berzerkers and thousand sons, though my demons came in and managed to fight him back a bit. That objective ended up being contested, but I still had the other firmly in hand, so I won 1-0. Special kudos to the thousand sons for fixing their immobilized rhino (though it was eventually destroyed anyway)!

Round 2 – Chaos – Capture and Control (Dawn of War) 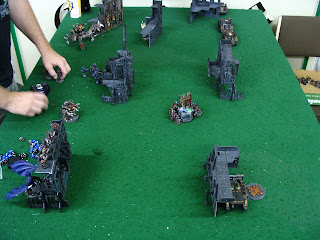 Last month it was orks, orks, orks, and now it was chaos, chaos... I always have a good time playing against Brandon, who has a very cool personalized chaos army with plenty of great models and paint jobs. He had his usual flying tzeentch demon prince with warptime and wind of chaos, a lash sorcerer in terminator armor, two big squads of marines, some terminators, some tzeentch raptors, a dreadnought, a defiler, and a havoc squad. We both put our objectives in opposite corners of the board, he deployed his demon prince and two unit of troops in buildings, and I started with my demon prince and nurgle car sitting across from them on top of my objective. Nothing much happened in his first turn. I immediately moved my demon prince out and lashed one of his troop squads toward me out of their building, charging them but not doing much damage. He countered with the raptors, who leapt into combat with the demon prince, but luckily for me everyone (including his lightning claw’d champion) whiffed; I won combat and everyone stayed in the fight. But with only one wound left on the big guy and his obliterators deep-striking in to attack my plaguemarines sitting there all alone on my objective, things were looking grim until my second turn when I got was able to get just the reserves I needed. The terminators and demons both used the nurgle icon to come into play. The terminators inflicted just enough wounds to wipe out the oblits while the lesser demons piled into the fray with the demon prince, raptors and chaos marines. In the end, I think I finished off the marine squad but his raptors emerged from the combat victorious. His demon prince made it over to my terminators and plague marines and finished them off. While all this was going to my left, I was advancing quickly with my other cult cars in the right. He was sitting on his objective with some havocs, backed up with the nearby defiler and terminator squad. His defiler blew up my noise marine rhino, and his sorcerer lashed them up into a building to slow them down a bit. I teleported in my obliterators and zapped his sorcerer with a twin-linked meltagun. The khorne and tzeentch cars continued their advance, whipping around his back building and jumping out to kill the havocs. The berserker car actually drove back to pick up the noise marines after they wiped out the surviving raptors with their doom siren (I love battle taxis!). I could never bring down the damned defiler, but neither it nor the terminators were able to get close enough in the sixth turn to prevent me from taking his objective. I won 1-0. 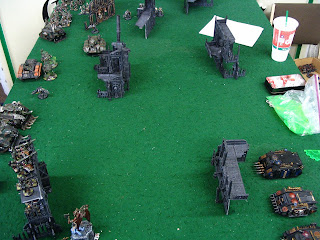 This appeared to be an uphill battle for Kingsley, who had 20 kill points to give away while I only had 14. I also managed to “seize the initiative” and go first after he had rolled to pick sides and go first. He was using his usual chem-inhaler bug fighter guard army, with a command squad, anti-tank squad, one or two hardened veteran squads, an infantry platoon with several squads, a squad of storm troopers (grenadiers doctrine) with a chimera, two lascannon sentinels, a squadron of two autocannon sentinels, a hellhound, two demolishers, and a standard russ. Once again I shot forward with the demon prince and nurgle marines on my left side, but this time I backed them up with the other cult cars following behind. I failed my lash roll to pull the anti-tank squad out of the nearby building and so he was left standing there looking stupid for kingsley’s first turn. Miraculously he was only able to inflict three wounds, so the demon prince survived to lash and assault the anti-tank and storm trooper squads before he was inevitably brought down. The nurgle marines shot up the remaning infantry squad on my left, just as my terminators and obliterators arrived to destroy the hellhound, one of the demolishers, and the battle cannon from the standard russ with close range plasma and melta fire. He spent his next turn destroying the obliterators and the terminators with infantry shooting, while his surviving armor kept up the attack on my left side. He killed 1-2 plaguemarines and demons a turn but they always had decent cover and he was never able to destroy them. His sentinels outflanked and attacked the rear chaos rhino. The thousand sons and berzerkers promptly disembarked and took two turns fighting them back. It was a very close and exciting game, down to the wire, until the sorcerer got a nice bolt of change off in the last turn to consolidate my lead in kill points, and I won 8-6.
Posted by bullymike at 6:31 PM

What loot did you bring home?

what army are you gonna bring to the tourni on sat? I decided to consolidate my sentinel squads to lower the number of kill points in my army... ugh. IG, so bad.