Even though there are supposedly plastic drop pod kits on the way, I seriously doubt I will buy them to switch in for my DIY pods. Hopefully most people will not have a problem with this, given that they are pretty much the same height and girth as the old forge world pods (and with luck, the new GWs will be the same size). I already play-tested this 1750 list against a couple of people and it was fun even when things weren't going all that well.

I would have played this kind of list a lot sooner, except in 4th edition I couldn’t join up characters with squads in drop pods, only with their retinues. Now I can hook them up with the grey hunters and add even more assault teeth to those already hardy fellows. I’d love to try out the deathwind missile launchers given the new blast rules; I could use the fire support, but they’re pretty damn expensive. For a 2000 point list I might try adding them as well as a couple of melta/flamer land speeders. Like any theme list, it definitely has its competitiveness issues. Obviously everyone comes in reserve, all in pods except for the scouts, so I may not get everything when I need it. When they all come in at once, like they did in one of my two games, it's pretty spectacular. It definitely lacks substantial long range anti-vehicle, but hopefully the pods will always get me close enough to hurt things (if my guys can manage to shoot straight!). I think this list should always go second if I have a choice (the ven dread should help with that) for three reasons: a) choice of deployment zone doesn’t matter much to a drop pod army, b) since I’m trading off numbers for mobility and surprise, the less turns my guys are standing out there getting shot, the better, and c) I would get that final turn to pry off any pesky fast things that try to contest objectives at the last second. If there was only some way to help them reroll reserves...

The terminators have always been very hit and miss (usually miss). I changed them up a bit for this list, ditching the usual plasma and assault cannon bath for a bunch of flamey goodness and giving them all runic charms and wolf pelts. With drop pods stopping short if they scatter into the enemy, I should usually be able to set up the terms in perfect position to really pour on the templates. This should ensure more total hits and wounds than their old gun configuration. The new template rules (calculate total number of hits before rolling to wound) make concentrated flamer fire extra deadly. And with the wolf pelts, if you charge into them without killing any, you’ll have to deal with 7 lightning claw attacks at I5, 8 power weapon attacks at I4, and 8 power fist attacks coming back at you. Plus the 5th edition retinue rule change means you can’t single out the battle leader until all his buddies are dead, and he can attack even when out of base contact. I might eventually double up on chain fists instead of including a thunder hammer, but I wanted to try it out once or twice. My wolves’ nemesis has always been the eldar Avatar; its high weapon skill, high... well, high everything, really, makes it a huge pain to deal with. In my game against Jake last week, the thunder hammer dropped him down to I1 twice, which meant more wolves left standing when the big lug finally hit the dirt. 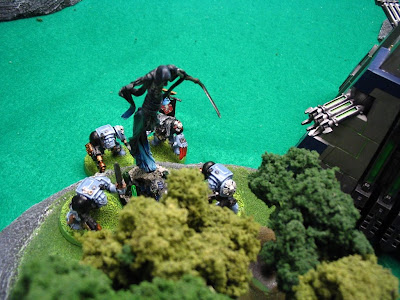 In their second game (against Jay's necrons), the stalling strategy helped quite a bit, considering the goddamn Nightbringer was eating everyone he came into contact with. Given a couple more turns he would have probably wiped me out completely. 5 T8 wounds is a real bitch when you don't get any shots in first. I don't remember if I ever slapped him with the hammer or not. I believe the game came out to a draw in the end.
Posted by bullymike at 8:21 PM

You eventually took a shot at him with the hammer, but failed to wound. The hammer mook died next turn.

The second scout squad would probably have easily taken down the warriors squad that was protecting me from phase out and that would have been that.

Ever thought about adding a dropping Landspeeder with Multi-melta? In 5e the count as moving Cruising Speed, meaning they can fire 1 weapon the turn they deep strike. I tried using a pair, and it was a great and relatively cheap way of taking out pesky armor... You have to love the look on an opponents face when you drop from the sky and easily kill a Land Raider for 65 points.

That list sounds fun, tough, and themed. I've love to play against it some time.