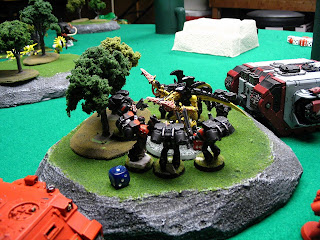 I’ve played a couple of 5th edition games with my tyranids over the last few weeks. Unfortunately both games have been played against extremely mobile armies using the annihilation mission, which I’ve come to realize is probably worst-case scenario for my nids (especially gaunts). I lost both games but learned a bit about what works and what doesn’t in the new paradigm. 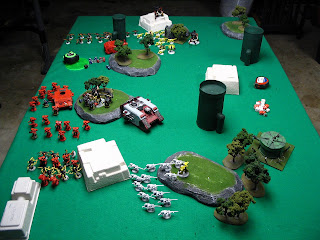 The first game was against Jay’s Blood Angels with pitched battle deployment. Jay had a death company squad led by Lemartes, an inquisitor with retinue and land raider, several jump marine squads, and three vindicators. I was using my flying dakkarant, four stealer squads with scuttlers, flesh hooks, and carapace, two squads of 20 termagants without number, three zoanthropes with synapse and blast, and two beefy gunfexes. In this game I flanked my four stealer squads and split the rest of my forces into a pincer to try and keep the assault marines nervous about moving out and getting charged. All four stealer squads arrived on the second turn, which seemed quite fortuitous for a moment, but in Jay’s next turn he moved his whole army to attack just one side and I realized I had made a big tactical error. The stealers on the right side would never reach any opponents, and without much in the way of help the stealers on the left would be annihilated. I actually managed to get a decent sized squad on the left into combat with one jump squad but the bugs totally whiffed (I had been thinking flesh hooks would serve them better than tendrils – another mistake – thanks Kingsley). The lictor arrived and blew out one of the vindicators, which was nice, but he was quickly gunned down in the next turn. The hive tyrant shot and assaulted the death company, inflicting only a few casualties before he was easily brought down by their rending attacks. Another mistake – I always succumb to the temptation to charge him into combat, when he’s probably better off just jumping and shooting every turn. After he finished off the stealers on the left side, he jumped up and wiped the two zoanthropes and gaunt squad camping out in the woods a short distance away. The gaunts came back the next turn from my table edge, but who really gives a crap in killpoints? I believe he ended up winning by two or three points. 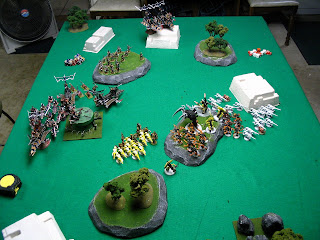 For my second game I ditched “without number” and took two squads of 28 gaunts instead of the smaller squads. I also wanted to try out a close combat fex at least once, so I tooled one of my gunfexes up with talons, tusks, and a mace tail. Instead of flesh hooks I gave the stealers feeding tendrils. The rest of the army was the same. Robert’s back in town and he brought over his dark eldar army. I wasn’t ecstatic to see the dice roll for mission pick kill points again, but then again, I hadn’t played against S&Mdar in quite a long time so maybe it wouldn’t be so bad this time. It was. Robert played a fairly mixed force of two squads of wyches in raiders, three warrior squads with two dark lances each, two ravagers with three destructors each, a squad of 7 bikes led by an archon, a beastmaster with four warp beasts, a squad of 7 or 8 incubi led by a dracon, and a talos. When he reminded me what all the particular units were capable of, I knew I was in a lot of trouble. Their mobility, combat drugs, and wych weapons were going to negate the stealers better than possibly any other army. We rolled for table quarters deployment zones, and I went first. I decided to outflank with only two of the stealer squads, keeping the other two in the mix of gaunts and fexes in the middle. After a single blast from my gunfex’s barbed strangler wiped out nine warriors, the ravagers and warriors laid into him with destructor blasts and dark lances, destroying him in a single turn. He charged into the front-most gaunt squad with one team of wyches and did plenty of damage there. The fearless rule really works against you when you only have a 6+ save. Not such a good idea to let gaunts get assaulted. A squad of stealers and the combat fex quickly ate them in return, but the stealers were killed by the charging talos (though it died as well) and the combat fex was dropped by lances and destructors before he could regenerate any wounds. The hive tyrant also did very little damage to anything before he was shot down. The lictor arrived, deep-striking right into one of the warrior squads, and I rolled a 2 on the mishap table, meaning he was DOA. The first squad of outflanking stealers came in on my left but were intercepted by robert’s second wych squad (which had conveniently rolled for “always strike first” drugs). Brought down to just three stealers, they actually managed to push the wyches back and wipe them out with a sweeping advance. By this time, however, they were my last models on the table. The second squad of flanking stealers had tried to bring down the ravagers (which Robert had forgotten to move the previous turn) but could only destroy one, and it had exploded and killed three stealers in the blast. Yeesh. I will say that feeding tendrils still paid off in this game, doing much to alleviate my apparently abominable luck when it comes to rolling hits in close combat.

So, in closing, I learned the following lessons about bugs in 5th edition:

Great little round up. Its was especially interesting to see the Bugs struggle against two H2H specialist armies.

Perhaps you should consider taking more than one of everything. You appear to focus on one lictor, one tyrant, one gunfex, one H2Hfex etc. Perhaps the following are future options:

1) Take some warriors - giving you mid range punch. Your list reads a little all or nothing.

2) Take two or three of it. The Zoanthropes worked, because there were many. One hellhound sucks, three are terrifying!

3) Did you infiltrate your stealers? Why not flank them? This seems the most straightforward approach to getting stealers in range.

4) Finally, you appear to hitting the lines in dribs and drabs - is that the case?

Finally, despite the above, a really valuable piece, thanks for sharing.

Thanks for your comments but it kinda seems like you were skimming the entry since I addressed most of your problems. I wrote that I flanked with the genestealers in both cases. I don't especially like to dilute nids with various crappy guns. Fex and tyrant guns are the only ones worth it to me. Warriors are crap at shooting anyway in my experience, though I have used flyers with talons before and might again now that they can get cover saves hidden amongst the swarm. If you look back at any of my past pieces you can tell I'm in agreement with you about redundant units, however I think its become less important in 5th. And anyway to take multiple hqs or elites it takes pts away from troops, the mvps of 5th. Not to mention its boring.

Nice report. Bugs have always been a temptation of mine and when the plastic Carnifex came out a few years back I almost caved and started an army. I've been so busy with the hobby aspect I've not yet played my first fifth edition game (sad, eh?). So, I don't have anything constructive to add. But I did want to leave a note and say that I enjoyed reading your blog today!

are you sure that synaps makes your guants fearless? i thought they just passed their ld test.

p.s. i told you to take off the tendrils on the stealers and add Broodlord with tendrils and attack with liqtors... you only had one liqtor so ofcourse it didnt work!

In 4th edition at least, it said that when working out combat resolution, units that auto passed their leadership tests counted as fearless, thus having to take armor saves for outnumbering.

Although in 5th edition there is no outnumbering, I'm fairly certain I read that they do take armor saves since they auto-pass ld.

Those feeder tendrils were just brutal man, they basically negated my wych weapons, which were supposed to negate your genestealers!

I agree with all the points you made though. I bet the gaunts would be much better in non-annihilation games.

I've got mixed feelings on the hand to hand fex too though. While it's easier to get him into combat now, having him rip through a squad in one turn and then be stranded in the open can make nullify that new advantage.

Thanks again for the game though. I'm gonna have to bring my Dark Eldar out more often now that they have 5th edition on their side.

I have no idea about 5th ed. as it looks like my 40k days might be over, but the word incubi is great.

I believe that the 'nids automatically pass leaderships when in synapse.

I disagree about Warrior shooting being crap. Enhanced SEnses, Deathspitters, and a Barbed Strangler let you pile on the wounds something fierce, but you do have to distract the enemy with other threats.

S6 Blast Weapons are murder, but again I've only tested them against vanilla Marines and Tau. I have, though, run about what you have (troop-wise it was 2x20 Termagants, 4x8 Stealer squads; Flesh Hooks + Tendrils, and 2 broods with ScuttlerS; 2 gunfex, and a long-range walkrant w/ 2 guard, and a lictor).

yes deathspitters and barbed stranglers would be nice. i will pick up some warriors for that if i ever win any more tourney prizes. i got tired of the double gunfex list, but i'll probably go back at some point.