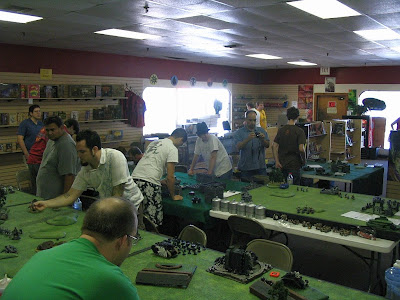 Last Saturday BFG put on another 2000 point hobby tournament, only this time with much less free bbq (sad face). I hurried to paint up one last thousand son marine so I could field the appropriate chosen number of the four cult squads (and the terminators) in my "cult car" army.

Overall the army worked well, and did best when the obliterators and terminators were doing their jobs. The lesser demons are good even though I miss having 10 of them; as any modest application of firepower can RTS them back to the warp PDQ (no COD). Lash is always great but I still need more practice. I'm considering bringing a defiler on board for ordnance (and just to have the bad ass model), maybe I could cram that in and ditch the weensy squad of demons. Also the "chosen number" gimmick is neat in theory, but I miss having similar sized squads of each cult. Six noise marines don't last long, so I sometimes had to get the doom siren in while I could, before they were vaporized into purple pink roadstains. Here's some more pictures of various armies: 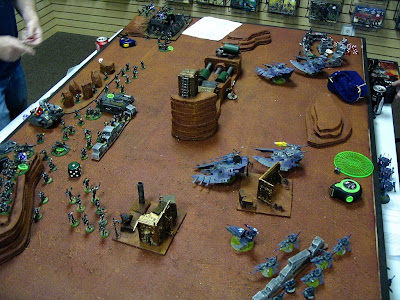 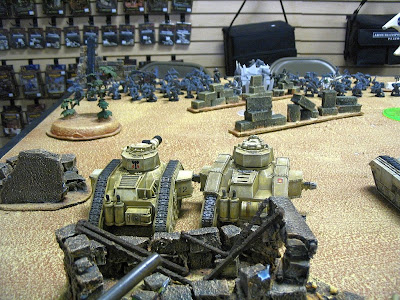 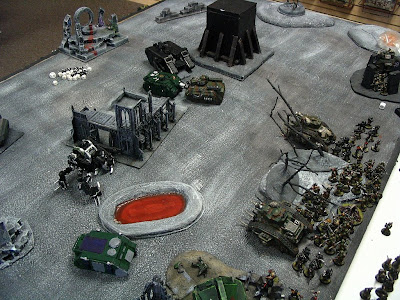 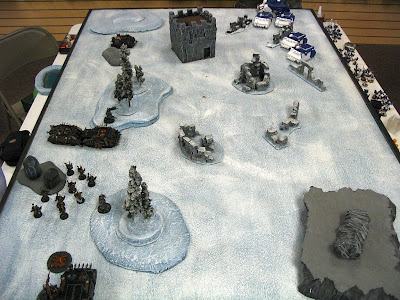 Deployment: 12" long edges
Primary Objective: Victory points
Secondary Objective: Command and control
Tertiary Objective: Table quarters
Bonus Point: Have one unit in your own deployment zone at the end of the game

Adam's got a great pre-heresy world eater army, complete with pre-betrayal Kharn (pre "^" even?). It included a chaos lord with a bloodfeeder, 9 or 10 berzerkers, 4 squads of 10 chaos marines with two meltaguns, icon of khorne, and a powerfist champion, each in rhinos, and a land raider. I believe Adam chose to go second, so I deployed my gang in a long line with the prince, tzeentchers, and an oblit initially camping out the home objective. He responded by crunching up in his right corner, on the opposite side of his objective, and bursting forward from there. I slowed down a couple of the rhinos early on, brought in the terminators on my right side to back up the noise marines, and sent the demons running towards his objective. I brought the plaguemarines back to hold my objective and paired the thousand sons with the berzerkers and met him in the middle. There was an epic battle on my left side when his land raider pulled around and disgorged the chaos lord and berzerkers right into the tzeentch terminators. The lord's bloodfeeder whiffed two turns in a row as the terminators slowly wiped out his bloodthirsty brothers. When he did get in one good round of attacks, the tzeentch invulnerable saved only one of my guys and the chainfist terminator cut him in half. Nearby, he brought in two obliterators right in front of two of my own, they exchanged fire, and one of my big guys fell. The other sprinted off in pursuit of the dratted land raider, missing or glancing it with his multimelta until he too was brought down under heavy fire from Adam's obliterators. However, the last terminator saved the day once again and exploded the land raider with his chainfist, helping me lock down the primary mission. My demons eventually made it to Adam's objective, but they were intercepted by one of his marine squads. My berzerkers and demon prince (1 wound left!), having wiped out a couple squads in the middle, made a last turn effort to stop them and grab his objective for their own. The marines had actually been pinned by lash when I stupidly decided to attack them with the prince (must be the chaos bloodthirst). I think Toggog killed one or two before the marine champion dragon-punched him the fuck out *blau*. But the berzerkers had grabbed the objective and blocked the approach with their rhino, so I accomplished the second objective as well. I also controlled more quarters and earned the bonus point. The vintage world eaters were sent packing back in time in their mega-armored deloreans! 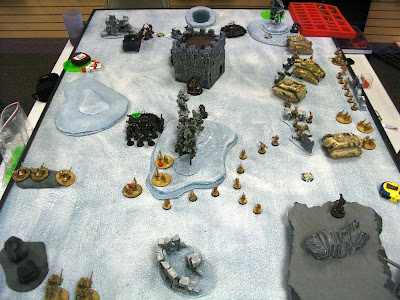 My opponent for my second game was John. He had an hq with a plasma pistol and standard, a chimera, an autocannon fire support team, a missile launcher anti-tank squadsome veterans with meltaguns, several different infantry squads, four autocannon sentinels, a hellhound, a demolisher, and a basilisk. He went first and deployed his armor, infiltrating most if not all of his infantry. I probably should have deployed in a long line to keep from getting encircled but I wanted to own the left side strongly since there were more objectives and hard cover over there. Consequently he built a ring of fire around me and poured it on for six turns until I had only a few models left. The dice luck swung strongly back and forth pretty much every turn. He had plenty of great shots in the second turn but actually inflicted very little damage thanks to a lot of scatters and good smoke launcher saves on my part. My demon prince got in place to lash his HQ into assault but rolled a 2 or 3 and was left standing out in the open. All three of my obliterators deep struck into great positions but could not manage to bring down any of the heavy tanks. I managed to get the berzerkers to the far left objective but after the obliterator assigned to kill the demolisher totally failed, the heavy ordnance reduced them to the champion. The skullmeister tried to assault one of the Russes himself, did zippo, and was brought down by Commander El Amin whoever-the-fuck's power weapon charge in the next turn. The plaguemarines cut right towards the fire support corral and managed to send one of the nearby squads running with a burst of bolter and melta fire. Then they were wiped out by a basilisk barrage. His veterans outflanked low on my left and shot up my demons. The surviving two charged in and wiped them out. In the end, he controlled two or three objectives to my one, had fragged my demon prince, and had 9 kill points to my 6 for a full sweep. 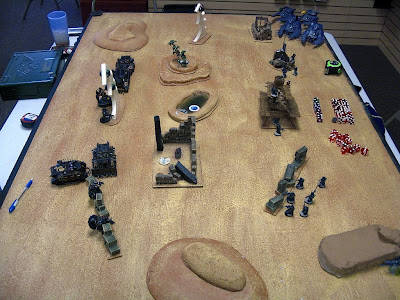 Third round I drew Jay. I might have the objectives switched around in priority for this one. Anyway, he was fielding an avatar, a 6-man squad of jetbikes, three squads of pathfinders, a big unit of howling banshees in a wave serpent, a unit of wraithguard with a warlock in a wave serpent, a vyper with a rocket launcher, three war walkers with scatter lasers, and two fire prisms. The pathfinders and fire prisms took my obliterators out early on, as the demon prince and thousand sons advanced and tried to deal with the avatar. I rolled a shitty lash distance against some pathfinders and the demon prince was left out of assault. He was finished off in the next turn and never could get over to help the thousand sons. The squad lasted three turns in assault against the avatar, but the sorceror's force weapon never managed to roll a 6 to wound and they were wiped out. The terminators teleported in behind the brawl though, wiped out the wraithguard, and finally finished off the avatar with chainfists after a couple of turns of fighting. The berzerkers fought off the howling banshees but were cleared out by the outflanking war walkers. The nurgle marines were holding an objective until the jetbikes pulled a last turn turboboost to contest. He didn't wipe out my pricey terminators but won the primary mission by holding one objective to my zero. He also came out ahead in victory points.
Posted by bullymike at 4:37 PM

yep, victory points was secondary. I stole a sheet for each round on my way out. :)

That Eldar army seems pretty hard for a Hobby Tournament. I think you did well, given the circumstances.

I played an army very similar to yours - one of each cult troop - but took a Defiler instead of the plague marines. It's a fun concept but the army suffers from lack of focus and low model count. Like you, I'm going to standardize the number of models in my squads because 6 Noise Marines are dead the moment someone sneezes at them.

Glad to see a fellow Chaos player who made it to the tourney. Good luck in the future!

Did you know that you can shorten your long links with AdFly and make cash from every visit to your shortened urls.