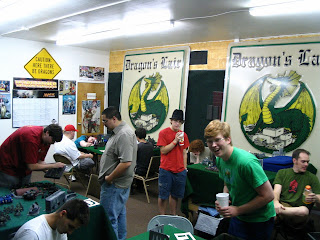 Dragon’s Lair hosted a big Gaming for the Troops 40k tournament on Saturday, where everyone’s admission was donated to the cause of buying gaming supplies for the real life army dudes overseas. I decided to take guard just because I was in a tanky sort of mood at the end of last week. My list consisted of:

There was at least 16 people playing with a decent mix of armies, including eldar, necrons, imperial guard, daemons, chaos space marines, space marines, and orks. Here’s a few of the armies: 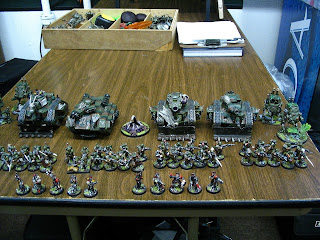 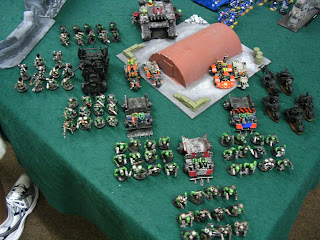 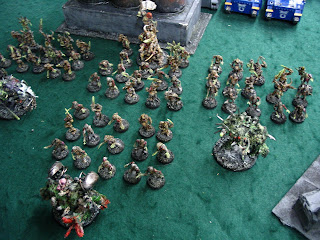 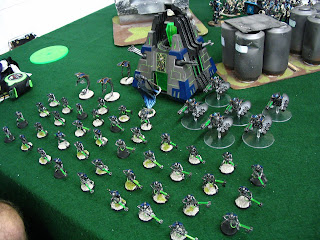 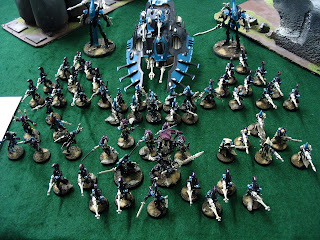 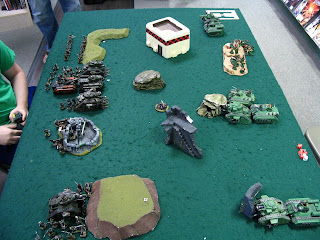 I usually draw Kingsley later in the tournament, but this time we were paired up in the first round for a guard grudge match. Other than our heavy tanks, our lists were fairly different. He had a command HQ, anti-tank squad, several storm trooper squads, an infantry platoon with 3 or 4 squads, a hellhound, 2 squadrons of 2 sentinels, 2 demolishers, and a leman russ. We had 5 objectives scattered around the board, with three closer to his side, one closer to me on the right side, and one right in the middle. The deployment was dawn of war, so with nightfighting in effect on the first turn, neither of us got very much done. On his second turn he killed a few guardsmen and destroyed one hellhound and one demolisher before they could do anything at all. I returned fire with little effect for a turn or two, but at some point my rolls got much better and I began to take apart his heavy armor with ordnance and deep-striking meltaguns. In the end, he used the new go-to-ground rules to good effect to forego leadership tests and contest or score objectives with units that were just slaughtered down to 1 or 2 survivors. I was going to charge forward and contest one of his home objectives but he immobilized my leman russ on the very last turn. We both held two objectives and contested the one in the middle. It is still taking some adjusting to get used to the chintzy way the 5th edition standard missions can sometimes play out in tournaments. Draws seem to be much more common, mainly because you pretty much have to kill absolutely everything, as one or two stubborn little douches can ignore leadership tests, “go to ground,” and turn the whole game around. It seems just a little retarded that pinned troops count as scoring or contesting. Draw, 10-10. 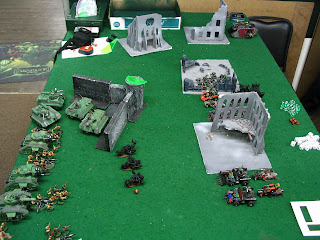 This game proved to me more than any before how even a bare minimum squad of ork biker nobz can totally break the game. Their base stats, movement speed, number of S10 attacks on the charge, endless layers of armor and invulnerable saves, multiple wounds, feel no pain, and practical immunity to leadership tests thanks to the boss pole are really just the beginning; all anyone has to do is equip them all slightly differently and they can get out of removing whole models, taking one wound at a time on this or that nob, while they grind through just about every other unit the game has to offer. And silly me, I thought they had actually fixed the wording to avoid people doing that kind of thing. Of course not. Colby had just one squad of 5 of these guys, and even though I shot my ENTIRE IMPERIAL GUARD ARMY at them on the first turn, I only killed two. They proceeded to wipe out at least one squad and one tank every turn thereafter. It didn’t help that deployment was yet again dawn of war, with nightfighting in effect on the first turn (even though he was only 12” away from my line), or that I had totally screwed myself while placing my objective and initial units. His two or three trukks arrived a turn later and I didn’t really have a chance. One of my command squads flamed an entire squad of stormboyz after deepstriking on the second turn, but that was about as good as it got. I tried to contest his home objective with my second command squad on the fifth and last turn, but I scattered 3 inches and rolled a 1 for their run, and so ended up an inch short. It would have been a shitty way to deny him the win anyway, as Colby did pretty much everything he needed to do. Orks win, 15-5. 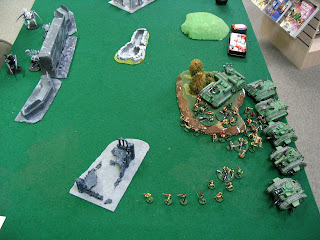 Ian was my third opponent. He had a flying hive tyrant, a broodlord and retinue, 4 or 5 carnifexes, 3 squads of scuttling genestealers, and a lictor. Deployment was table quarters, which is definitely not my favorite for guard after the game against Mike at the last BFG hobby tournament. It squeezes all my tanks together and usually there’s a bunch of cover in the middle that allows assault troops to get really close. I think he was somewhat new to tyranids, as he never really used any of the units to their full abilities. After I found out he was outflanking all the stealers, I shifted my army away from the closest short table edge and into a big hill in my quarter. For a couple of turns I gave them sacrificial squads and then shot the well-fed stealers to pieces right afterwards. Thanks to some big pieces of cover where he managed to hide his MCs from my lascannons, we drew for kill points (4-4) and the game. Draw, 10-10.
Posted by bullymike at 9:49 PM

I faced Colby's modest Nob biker squad in the first round. It took every unit in my army both shooting and assaulting to take them down. Even with all this I lost great deal of models in the combat phase. They are the most crazy-tough unit I think I've ever encountered in a game. I can't imagine what it would be like fighting a swarm of 10 or 20 of those things.

Glad to see an IG army pulling a draw in Kill Points.

Nurgle daemon army was interesting, have yet to face any daemon armies at my club. Glad to see some Eldar, but am I the only one who doesn't take the Avatar?

That is my Eldar force and i actually only recently started using the Avatar.

Is Amy bored or tired?

ibid on the avatars. they're dope.