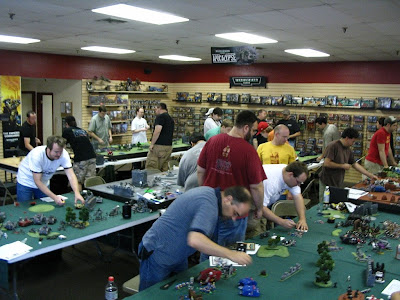 The first round of the 2008 'Ard Boyz competition was held at 2 different stores in Austin last Saturday. This year I picked Battleforge because they were awarding double tournament points and they run a kick ass store besides. After hemming and hawing for a month or so, I decided to take tyranids (see the last entry for my list).

I played a test game using 6 stealer squads and a third sniperfex, which worked fairly well, but after the ruling came out about needing to destroy all elements of a force org slot in order to get kill points (and a few nightmares about endless swarms of land raiders), I decided to include 3 warp blast/synapse zoanthropes for better anti-armor and a smallish swarm of endless number fleshborer gaunts for objective control. I also decided to give scuttlers to only two of the 12-man stealer squads. I wanted to have more models on the table to begin with so that my big bugs would stick around longer and have some assault defense besides. I still kept the two since dawn of war would be used for two of the missions and I wanted to try to get first turn assaults (or at least threaten with them). I had three fun games against always congenial opponents and ended up with third place. First place went to Nick's Black Templar horde and Josiah's land raider extravaganza got second.

Here's the missions for the tournament. 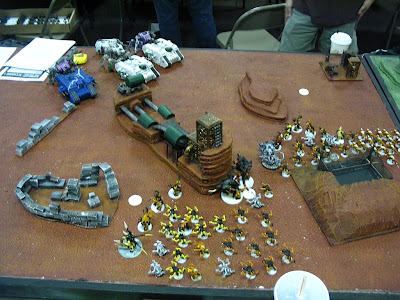 For my first pairing, I drew Bigred and his mighty armored chaos firebase. He was playing Typhus, 14 chaos glory terminators in 3 squads, 3 land raider transports, 2 squads of 5 chaos glory marines in rhinos, and 3 defilers with 2 extra close combat weapons. Larry is a great general and competitor and I knew it would be an uphill battle. Even with the zoanthropes, the land raiders were pretty frightening, and if it hadn't been for a clutch barbed strangler immobilized result on the one carrying Typhus, things would have probably gone much worse than they did. I scuttled both scuttlers. One came in on my left side to attack a rhino flanking me on that side to grab an objective. Unfortunately they were only able to destroy the transport's combi-bolter, so the marines got out the next turn (with their flamer) and killed 9 in one round of fire. I removed just enough models to keep the demon pack that had just arrived nearby from assaulting, and then charged in myself in my next turn. The three of them wiped out the demons after two more rounds but the marines eventually finished off the sole survivor. The other came in on my right side to join the swarm I'd spread out to grab objectives. Two land raiders and gradually disgorged two terminator squads into the mix. Along with the marine squad, they wiped out the zoanthropes, gaunts, hive tyrant, and 1 stealer squad. One defiler charged into a carnifex, took it down to one wound, and the carnifex struck back and exploded the maniacal demon engine. The remaining stealers were fairly successful in fighting off the terminators and consolidating my objectives, and I was ahead by one objective until the 6th and final turn. I lost one too many of the back-from-the-dead gaunts to defiler ordnance (I had only managed to immobilize a couple of them), and without any synapse left on the table they abandoned their objective and ran off the board. It was a minor win for Chaos and we both had earned two bonus points. Very tough game, a lot of fun! 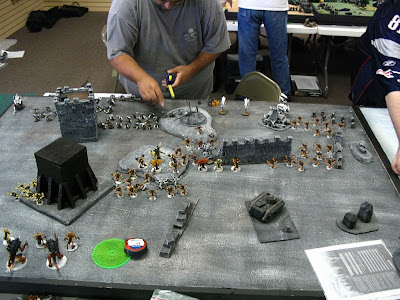 Adam was one of two other tyranid players at the first round of 'ard boyz, using a list with more upgrades and a greater variety of units than mine. He had an assaulty tyrant with a venom cannon and 2 guard, a broodlord with 8 or so genestealers, a squad of warriors with deathspitters and a venom cannon, a single lictor, 20 or so genestealers, 2 small squads of fleshborer gaunts, a big squad of hormagaunts, a big gun fex, a dakka fex, and 3 zoanthropes. I went first, setting up all my stealers along the center line, and he set up his battle line 18" back from me and the broodlord's unit behind me on the left. First I had to deal with the broodlord. I brought my heavy support onto my table edge in turn 1 and unloaded into them, killing 5 or 6, and then charged my nearest stealer squad in and finished them off. One hive tyrant and two stealer squads attacked on the right side, while the other tyrant and two more stealer squads attacked on the left. My lictors were fairly ineffectual, and starting at my table edge kept my fexes and zopes pretty much out of the game after their initial attack on the broodlord. On the right, my stealers worked their way through his dakkafex and gaunts while my tyrant wiped out his stealers and zoanthropes. I finished off his stealers in the middle and left and charged into his hive tyrant with stealers and one of my own tyrants. It was an epic battle, and his tyrant's close-combat biomorphs kept the big guy swinging and killing until a few surviving stealers finished him off. The game ended with me ahead by 8 kill points, enough for a massacre result. 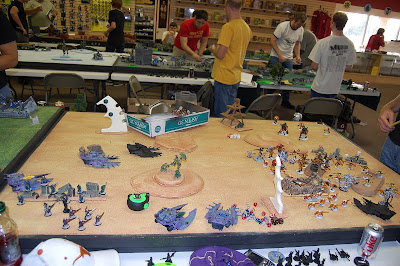 As has happened many times before, I was paired up against Jay in the third round. He was running Eldrad, Maugan Ra, 3 squads of 10 dire avengers with dakka wave serpents, a squad of pathfinders, 2 squads of 10 fire dragons, 2 fire prisms, and a squad of dark reapers. He rolled to go first, and set up his objective, three dire avenger wave serpents, pathfinders, and HQ-reaper megasquad in cover on my left side. I set up my HQ and troops right on the center line again. I decided that the more units I could swarm on his objective the better, and use the sure-to-die-and-return gaunts to hold my own with anti-skimmer and synapse support from the zoanthropes. He used Eldrad's special rule to move one of the wave serpents and the HQ-reaper megasquad over to the opposite side of the board, which was great from my perspective. They were still in range to shoot up gaunts and genestealers in range, but I didn't care much so long as it bought me time to disable as many skimmers as possible and prevent any last-minute land grabs. Very luckily, I seized the initiative and the scuttling stealers brought down both of the avenger serpents Eldrad had apparently abandoned to fate. The rest of the army moved up. The 20 avengers emerged from the wreckage unscathed and unleashed shuriken hell, wiping out the offending squads to two stealers each. One unit broke and retreated to the closest hive tyrant, while the other was charged and wiped out by one of the avenger squads. The aspect warriors tried to make a final charge into the gaunts leading the swarm, but with feeder tendrils nearby, they didn't last long. I took losses here and there from reaper rockets and fire prism blasts, but still had plenty of models left by the time I earned the bonus point for controlling both objectives. The carnifexes and tyrants slowly brought down the rest of the skimmers as they tried to flank far around and contest my objective. One wave serpent made it within 18" or so inches but a barbed strangler destroyed it in the fourth turn. In the fifth and final turn (random turn length), he darted one last skimmer over to contest my control of his own objective but came up just short of the needed distance. I controlled both objectives and was ahead in kill points, giving me a massacre. One more tense and highly enjoyable game!
Posted by bullymike at 7:52 PM

Well fought Mike, nice to see your 'fluffier' Tyranid force do so well... was there a conclusion from this, or are we waiting for part 3?

I have a couple in my report you can steal.

Did you know that you can shorten your urls with BCVC and receive dollars from every visitor to your shortened urls.