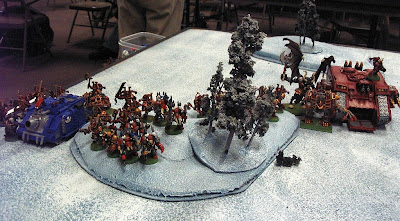 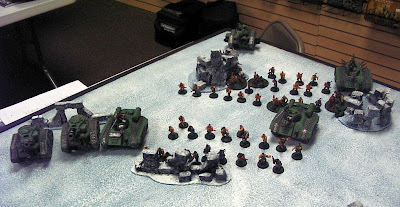 The 6th army, led by Commandant-General Arrian and including Catachan jungle fighters, Methalor penal legionnaires, and the mechanized Terrax Guard, stumbled out of the gate in their first battles against the ravening traitor hordes of Elinia. Arrian showed his hand particularly in my game, first by carelessly deploying my catachans in the chilly northern wastes, and then by pulling my very nearly victorious forces back after a long and devastating fight. I faced off against Frank's khorne devotees, which included a lord on a juggernaut, a flying demon prince, 5 terminators with combi-weapons and a reaper, a dreadnought, 4 squads of 8 berzerkers, a land raider, and a vindicator. I used the list from my last post. We had the annihilation mission with spearhead deployment. He went first and killed a few guardsmen with a demolisher blast. The catachans responded with their own ordnance and exploded the land raider, killing 3 of the berzerkers inside right off the bat. The demon prince flanked around and destroyed 2 tanks and disabled the other for the dreadnought to eventually finish off. Two squads of berzerkers and the juggernaut lord wiped out my front-line jungle fighters, but I was eventually able to wipe them out with tons of flamer templates. My sentinels and one of the veteran squads came in on my left table edge and managed to do a little damage, but Sariyapa and his veterans came in on my right and were stranded without a job for the rest of the game. In my phase of turn 7 Frank was well ahead in kill points, but I had wiped out everything of his but 3 chaos terminators. My hellhound killed one and the chimera levelled its weapons at the survivors and inflicted 4 saves. The first termimator died, but the second passed both saves for the win.

It was a great first week, though the inherent weaknesses of the guard were on full display at many of the tables. Still, there's few more satisfying moments in 40k than a successful demolisher cannon hit. The 6th army lost all of its battles, but I had an epic game (probably my most enjoyable since 5th edition came out) and can't wait for week 2.
Posted by bullymike at 9:57 PM

Pretty much shows the problems with Kill points where the opponent has a single ~40 point model left on the table and you still lose.

Even as the owner of that single 30 point model, I agree.

I'm interested to see how the AC does against a more hearty foe.

What a great way to summarise a battle - nice one! And well done to the Glorious Guard for selling their lives so dearly. Cheers, mate, and good luck with the next engagements!

Glad to hear you had a good game. Your table was one of the few with two fully painted armies. Nice to see you got good pics.