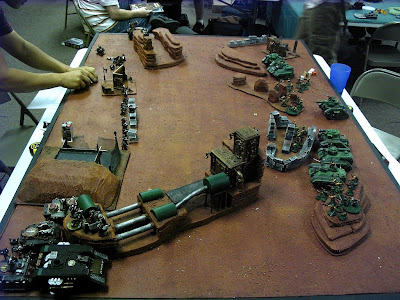 This week the Catachans met defeat once again, this time at the hands of heretical zealots on the planet Christos. Josiah was fielding a canoness with celestians in a land raider, a priest, an inquisitor with 3 multimelta servitors, two squads of sisters in rhinos, dominions in a immolator with twin-linked heavy bolters and blessed ammo, a small squad of seraphim with 1 or 2 inferno pistols, an exorcist, retributors with 4 heavy bolters, and a penitent engine. We played with pitched battle deployment and the seize ground objective with 3 objectives. I had first turn but shooting was totally ineffective given the intervening terrain. Aside from the retributors in the middle and the penitent engine on the right, he attacked my left flank with his entire army, leading off with the land raider. One squad of my veterans outflanked in the third turn, and though they destroyed the land raider with their meltaguns, it was already too late. The canoness and celestians had already disembarked and wrecked shop on an entire infantry platoon, a hellhound, and one of my demolishers. It was a similar story with the penitent engine. Kariyapa and my second squad of vets outflanked on that side and it down with their meltaguns, but not before the walker had wrecked my other demolisher that had immobilized itself in difficult terrain. After the exorcist destroyed my other hellhound and command squad chimera, it was essentially over and I conceded.

The 6th army is one victory away from progressing beyond Christos, but given that we'll be fighting hell on tyranids in Palus Olidus next, things will probably only get worse. I want to shift some things around and bring in a win before we clear our first warzone.
Posted by bullymike at 7:01 PM

Good luck in your next game... perhaps the Catachans will get to play on a Jungle Board... or atleast one with trees! geeze