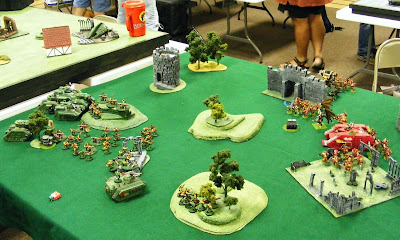 Another epic battle this week, as the Catachans did their part to push the 6th army through the Christos battlezone. The rogue band of world eaters who had fled to Elinia following the Horus Heresy were once more baited into a ferocious charge, but this time the imperial line held and the traitor marines were contained and effectively defeated. After being delayed by bad intelligence and poor planning on several key occasions in the fight for control of the system, Kariyapa requisitioned himself a Chimera and accompanied a squad of his finest veterans straight into the heart of the enemy. He ordered his remaining on-world forces to assemble into the forested highlands to the south of the enemy bastion for a final assault. Fighting in their element, the veterans and elite jungle fighters took up ambush positions amidst the thick underbrush while the armor and heavy weapons held back and zeroed in on the treeline where the enemy would emerge. At the spearhead of the initial attack, a land raider full of traitor terminators burst from cover heading directly towards the forward guns. Kariyapa and his bodyguard surged forward in their chimera to intercept. The veterans disembarked in the path of the heavy tank, leveled their meltaguns and inflicted a direct hit, triggering a huge explosion that killed one terminator inside and left the survivors entangled in wreckage. 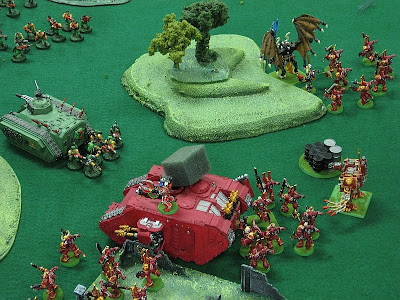 Demolisher tanks and heavy weapon teams vaporized the enemy leaders as they emerged on the left side of the Catachan line. After the most direct threats had been eliminated, the imperials focused their shots on the scattered infantry, eventually wiping them out to a man. Devastating assaults from enemy walkers prevented any early victory celebrations, however, and even danger-close ordnance fire could not slow their implacable advance on the Catachan command elements. Reports of these khorne demon engines continuing to wreak havoc on imperial positions are, in all probability, highly exaggerated, as nothing (previously encountered) could have survived the final orbital bombardment of the area surrounding the traitor stronghold. 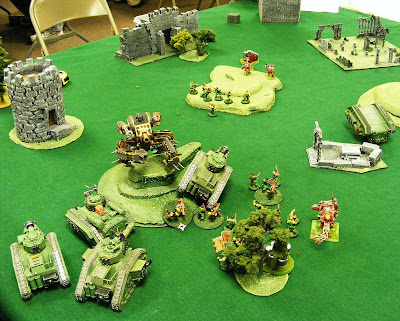 The Christos warzone has been substantially pacified and the majority of the 6th army continues on towards the Palus Olidus system. Early intelligence reports hint at paranoid human technocracies, highly dangerous native fauna, and isolated pockets of cultist enclaves. The Catachans have taken heavy casualties but the survivors are now grittier and more battle-hardened than ever before.

Yeah the Guard! Great battle report, I particularly enjoyed your "On the spot reporter style." Very entertaining. What was the makeup of the force? The Meltagun move worked a treat against the landraider, so what firepower did you bring to bear on the worldeaters...?

Mostly ordnance, hellhound flame, heavy bolters, and franks poor power armor saves helped whittle the berzerkers down. My krak missiles couldn't pierce a thing and hardened fighters was a complete waste against a khorne horde. Kariyapa did great this game, his vets accomplished a crucial objective and he personally killed 2 or 3 termies in close combat after his buddies were shot down. He was grievously wounded, however, by a chainfist to the earhole and will require some bionics before he returns to command.