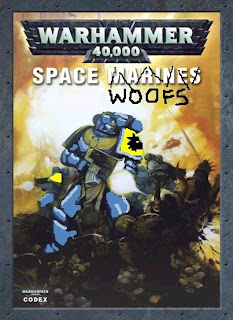 I picked up a box of tactical marines with my third place win at ‘Ard Boyz with the intent to have enough models to field a standard space marine army using their shiny new codex. Mainly I needed to be able to replace all my plasma pistol and powerfist grey hunters with more boringly equipped marines. However, after comparing my potential list with my standard wolves list, I’m not so sure that the army would be much better. Wolves will retain all their old benefits and get many auxiliary units (e.g. land speeders and attack bikes) at cheaper prices.

Here’s the vanilla marine list I wanted to try:

Not saying it’s the best construction possible from the new codex, but it’s the closest thing to my latest wolves list. Here’s that:

The real advantage of the vanilla is Sicarius and his surprise attack, battle-forged heroes, and rites of battle special rules. But the wolves list can fairly approximate two of these with their own rules anyway and leadership has never really been a problem for space wolves, even after they lost the against all odds benefit. Since they're usually up in the enemy's face and don't take heavy weapons in the squads, being forced to fall back isn't that big of a deal. Being able to re-roll seize the initiative might be marginally helpful, but the wolves venerable dreadnought gives you a similar effect anyway, plus he’s got 3 base attacks and comes cheaper than the vanilla version. Sicarius can grant scout, infiltrate, tank hunters, or counter-attack to a single tac squad, but everyone in the wolves army has counter-attack already (not to mention additional attacks for those wearing wolf pelts). Wolf scouts are slightly more expensive than their vanilla counterparts but are still the better with their rear-guard attack and more special weapon options. My blood claws won’t get to re-roll misses in the first round of combat like assault marines led by a chaplain, but a) they get one more attack on the charge, b) they can have more powerfists, and, most importantly, c) they are a scoring unit!

This is by no means an exhaustive comparison of the two armies, but it probably puts to rest my plans for watering down my wolves just to use the new hotness. I should be ashamed of myself anyway - Russ would have rolled in his... well, rolled wherever the fuck he is. I'll keep the spare tac marines handy just in case the next wolves update leaves me no choice.
Posted by bullymike at 9:18 PM

Counter Assault would be my main reason for staying with the wolves but that is just me.

The main weakness I see in the SW list is that it only has three scoring units to the Vanilla Marine's list of 5 - possible - scoring units.

Granted, the three Puppy units are more survivable than five combat squads, but when you're fighting for objectives, I think four scoring units is the minimum.