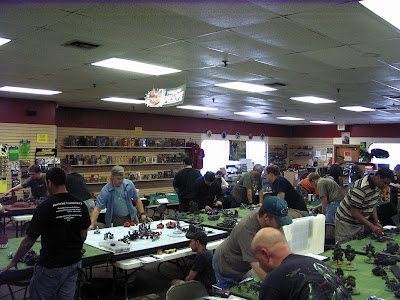 I changed my 'ard boyz list a tad between the first round last month and the second held this past Saturday. The zoanthropes and lictors had never made much of a difference, so I decided to scoot them out, make all my stealer squads scuttlers, and bring in a third sniperfex. Here's the whole shebang:

The warp blast on the one tyrant was an afterthought really, I just couldn't find a better place to spend the points. I didn't need scuttlers much for this tourney, and when I did outflank with a squad or two, it was only marginally helpful at best. They could have just as well started on the board. Most of the really hard armies I come across just don't have the stacks and stacks of heavy bolters that would take this list to pieces, and as such I've been able to effectively play the waiting/counter-assault game with my stealers while my tyrant and fex bio-guns blow shit apart for several turns. Once I've destroyed the worst enemy dakka and disabled their transports, the stealers swarm in and wipe out survivors. There were over 20 people playing in the semi-finals at Battleforge, with only six of us from Austin. I had three fun rounds against congenial opponents. Strangely (or maybe not so strange), the standings came out exactly like the first round - Nick in first place, Josiah in second, and me bringing up third - go Austin! I still don't know if I'll be attending the finals in Baltimore, but I need to decide here pretty quick if I want to have enough time to make plans. 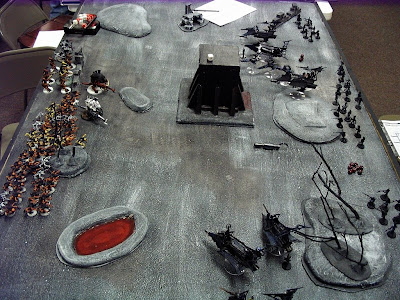 Jeremy had an archon with bodyguard in a raider, dracon with bodyguard in a raider, 10 wyches in a raider (always strike first combat drug), drazhar, 4 jetbikes (reroll to hit combat drug), 4 squads of 10 warriors with 2 dark lances each, 2 raider squads, and 3 ravagers with dark lances. I wasn't 100% confident about my chances at first, having lost my last game against the sadistic pinheads, but after a couple of excellent turns of shooting I felt like I had it back in the bag. I concentrated fire on the ravagers, which I knew could devastate my own long range guns, and the venom cannons brought each of the heavy skimmers down in the first two turns easy as pie. The two massive HQ units as well as the wyches were threatening me on the right in their transports, so I brought them down next. Mass devourer shots and a couple of genestealer charges finished the grounded survivors off and it put me far enough ahead in killpoints to earn a massacre. It was a cool army played by a skillful opponent, but just not as effective given how badly DE skimmers were hosed by 5th edition vehicle rules. With a holofield equivalent in their next codex revision, they'd likely be back in business. 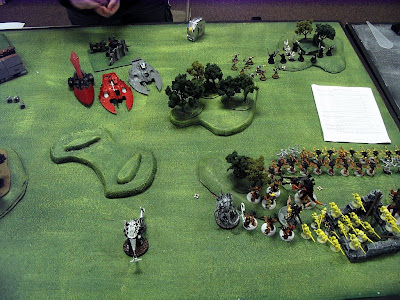 My second opponent had received full points for a bye in the first round and so found himself at table 2 for his first game of the day. He had Eldrad, a squad of 10 warlocks, 10 banshees in a wave serpent, 8 harlequins, 10 striking scorpions, 2 squads of dire avengers in wave serpents, 2 squads of 5 pathfinders, 2 squads of 5 dark reapers including exarchs with tempest launchers, crack and fast shot. We both set up 2 objectives near our own deployment zones with the 5th in the center. He used Eldrad's divining douche or whatever to move him and the warlock squad along with the harlequins over directly in front of me. Not real sure what the strategy was there, but it brought them closer to my tyrant devourer fire and scuttling stealers, which was fine by me. His own outflanking scorpions came on from the right and charged into a carnifex, who only shrugged his shoulders, stomped one or two, and waited for one of my flaking stealer squads to dispense with the annoying little greenies. Eldrad and company went down after several turns of combat with another stealer squad. My fexes downed the dire avenger wave serpents and the tyrants wiped them out with mass devourer fire. In the end, I only lost two stealer squads and a few tyrant guard, and captured four objectives to his zero, earning me another massacre. Unfortunately, it sent me right into hell's maw, a.k.a. Nick's annoyingly successful Black Templars. 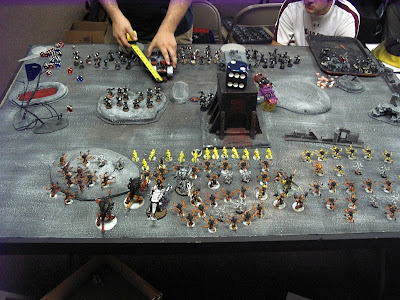 I'd seen mighty Bulwark go down in flames against Nick's templars at Table 1 in the third round of the 'ard boyz qualifier last month (keeping him from placing), so I wasn't too keen on facing off against them myself. I eventually decided to hang back and try to whittle down his infantry with shooting until I could counter-assault to prevent him from owning both objectives and earning a massacre. He had something like 5 big mixed squads of templars, 2 squads of 5 assault terminators, 3 melta/flamer land speeders, and 2 crusaders. Marshall Helbrecht and the Emperor's Champion were somewhere in all that mess, too. My shooting had little effect and he eventually made it over to my lines, destroying everything in his way, but the game ended on turn 5 and I was still controlling (or at least contesting) my home objective. Genestealers have little chance against power armored marines with preferred enemy, especially when you're not rolling too hot for rending, and given any other scenario it would have gone much worse. He was far ahead in kill points but without both objectives he only earned a minor victory.
Posted by bullymike at 3:18 PM

lol it wasn't helbricht was just a normal marshell.

Helbricht is too expensive :P