Saturday was another hobby tournament at Battleforge. I decided to take Wolves this time. Here's the list:

When I pulled up there was quite a gaggle of geeks gathered round the front door, most of them there to play in a D&D tournament. It appeared we might not have enough folks for a tourney, but eventually more 40kers showed up to make 8 players total. There was maybe 2 fully painted armies other than my own, including J Wolf's Tallarn and Jay's Eldar. In a break from tradition, I was never paired up with Jay, and in the end I went 1-2 and came away with best painted. 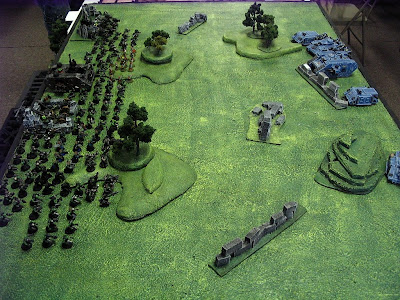 Colby had over 140 orks, consisting of a couple big meks, one with a force field in a battlewagon with a bunch of burna boyz and the other with a shokk attack gun leading a squad of lootas, tankbustas, hard boyz, a couple big slugga boyz squads, a big squad of shoota boyz, 3 or 4 koptas, and a battery of lobbas. We only got through 3 turns before time was called, but it didn’t matter much as most of my forces, including the land raider, had already been destroyed by then. My smaller army just couldn’t deal with that many greenskins at once, and it didn’t help that he was rolling very well while I had almost zero luck. My plan was to hold back with the transports until he got close enough to charge with the blood claws in the land raider. This went down the toilet pretty fast when he destroyed one rhino of hunters with the lootas in the first turn and then wrecked the land raider with his shokk attack gun in the second. The koptas outflanked on the second turn, first immobilizing then destroying the vindicator. The best thing I did in the entire game was to kill enough tankbustas to make them fall back; of course they regrouped in the following turn and were back in the game like nothing happened. The game ended with him earning full points to my zero. 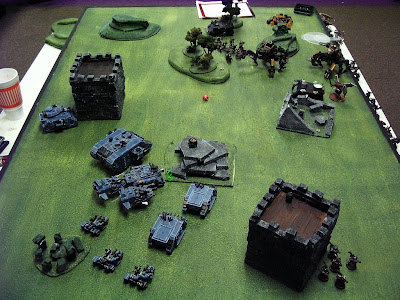 For my second match I drew Adam and his mixed chaos force. He had a jump lord with lightning claws, a flying khorne demon prince, a greater demon, a small squad of chosen with mixed special weapons, a squad of plague marines in a rhino, a squad of MoN marines with a heavy bolter, another squad of MoN marines with a rhino, a squad of khorne raptors, and two defilers. We rolled for 3 objectives and he won first turn, taking the quarter closest to 2 of the objectives. His veterans infiltrated to my right behind a building, popped out in the first turn and immobilized one of my rhinos. The plaguemarines drove forward and disembarked, followed by the demon prince. One squad of hunters and battle leader charged into the plaguemarines, the other into the veterans, both wolves squads decimating their opponents. The plague champion was left standing, however, and was possessed by the greater demon in the next turn. The demon prince charged the other squad. Both battle leaders were killed, but eventually the hunters' powerfists prevailed and the big bastards were brought down. The defilers immobilized the land raider early on, leaving the wolf priest and blood claws stranded once again. They came out to help out the grey hunters, but after the hunters finished off the demons by themselves, the squad returned to the safety of the raider. They disembarked once more and charged the raptors who deep struck just behind my front line, wiped them out, and claimed my home quarter objective. The two half-strength grey hunter squads ran forward to grab a second objective. The squad of chaos marines driving over in their rhino to attack them was disabled by a wolf scout ambush. The marines disembarked and wiped the scouts out with shooting in the next turn, but they had accomplished their objective by stalling his last troop unit. The defilers eventually fell to lascannon and demolisher fire, and I wiped out the chaos marines holding the third objective, putting me up 2-0. 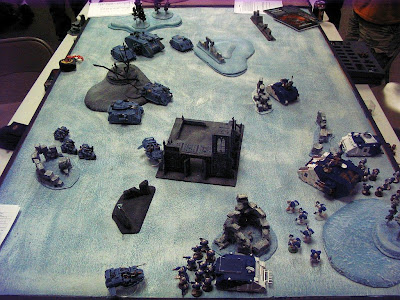 I played my third match against the other Adam, who brought his pre-heresy World Eaters. He had a chaos lord with demon weapon and a squad of berzerkers in a land raider, several squads of MoK marines in rhinos with a lash sorceror riding along in one of them, an obliterator, some khorne raptors, and a squad of lesser demons. It was a very entertaining game with plenty of momentum swings in both directions. He drove forward with the sorceror's rhino, and our land raiders exchanged lascannon fire. His was a better aim and managed to quickly immobilize mine (I really have to switch out the apparently worthless treads on my broke-ass raider). I kept the wolf priest and blood claws inside for a last second dash to the center. The attack bikes and land speeders went right to engage one rhino full of chaos marines coming my way. The marines jumped out a couple times, first destroying one of the speeders, and then driving further to wipe out my bikes. I sent the other speeder to pop his land raider, but even at close range the multimelta couldn't manage to pierce the armor (only rolled a 13). His sorceror and accompanying squad of MoK marines drove straight at me, jumped out, and popped one of my grey hunter rhinos. The sorceror lashed them and the chaos lord and berzerkers jumped out of their land raider and finished them off before heading over to krak attack my predator. I decimated his raptors with shooting, but the meltagun raptor survived to eventually hunt down my vindicator, which had been fleeing to my table edge after its main gun was destroyed. The other grey hunters drove straight towards his table edge before circling around to block the sorceror's escape and pop his transport with a melta hit from the back of their own rhino. As he stumbled out of the wreckage, the land raider finished him off with a single lascannon shot. The scouts attacked from his table edge and tried to melta the land raider, but again I got a 13 and failed to penetrate. Somehow the brave old bastards weathered a turn of shooting from one of the nearby marine squads and a full charge from a deep-striking demon squad, broke free and got another melta shot off at the raider, this time hitting the fuel tanks and sending it sky high. A bad ass turn of events, alas it just wasn't enough to put me over in points. One interesting thing to note - the fenrisian wolves have special rules that allow them to be removed as casualties before the character they're bought for, which (very briefly) came in handy in the wolf priest's last stand against Adam's chaos lord. He ran out of my immobilized land raider as I planned, leaving the blood claws squad who themselves ran for the center. The priest and wolves leapt headlong into the chaos lord and berzerkers. It was all for nought, however, when the priest totally whiffed and died to subsequent powerfist attacks. In the last turn, the chaos lord and marines charged into the blood claws holding the center, and although the lord was squished by powerfist attacks, the rest of the chaos marines finished the blood claws off and claimed the third objective. He won the primary, secondary, and tertiary, and I got just the secondary.
Posted by bullymike at 12:58 PM

playing against all that chaos is what made you sick...

My question is: Do you think mixing a couple rhinos and a land raider with a couple drop pods makes sense? I see your point about how drop pods might want to go second and rhinos would want to go first.