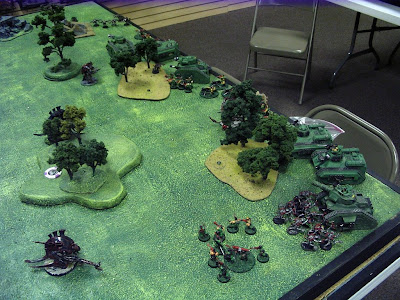 Following the pacification of Narn at the hands of the Methalor Penal Legion, the 6th Army proceeded to their next objective: Palus Olidus. Dense fog and vegetation covering the planet’s surface prevented long range reconnaissance scans and necessitated the deployment of small survey teams. When more than half of them failed to report back, and survivors reported close range fighting against highly aggressive native organisms, a detachment of Catachans from the 6th Army was dispatched to secure landing zones and gather further intelligence. Several different categories of insectoid xenoforms were identified at the cost of entire platoons of jungle fighters.

Scout elements came under attack almost immediately upon landfall. Multiple squads were surrounded and wiped out in short order by large groups of agile man-sized creatures that burst from clandestine tunnels and attacked viciously with tooth and claw. Counter-attacks by flamethrower units and heavy armor were successful in repelling the vanguard creatures, but the catachan lines were once again overrun by larger creatures that swept man and tank aside like children’s toys. After Kariyapa’s cadre of veterans downed one of the gargantuan leader beasts with plasma and melta weapons, the carcass was retrieved and transported to the command frigate holding orbit above Palus Olidus. Although xeno-biologists working with the 6th Army have identified several anatomical weaknesses that could potentially be exploited in future fighting, the lack of reproductive organs suggests a eusocial community structure such as that observed in hymenopterons. When the scientists posited the existence of what they called a “grub-mother,” Commandant General Arrian astutely observed, “It must be something we haven’t seen yet.”

That was a great report. Looking forward to the Ard Boyz reports.