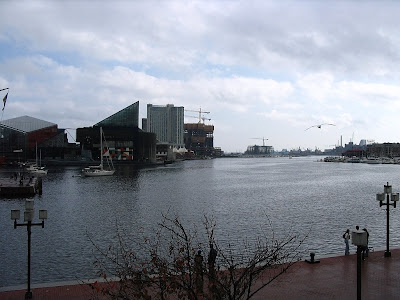 I flew up to Baltimore for the 'Ard Boyz finals last Friday with Abe, Thomas, and Nick. Brandon joined us Friday night and they all went on to play 40k and fantasy in the GT over the weekend. I would have stayed to play in the much more appealing 40k GT, but I had to get out to Midland on Sunday for work so I returned to Austin on Saturday afternoon. 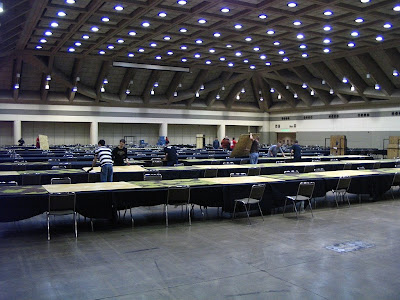 The trucks with the tables and terrain arrived 5 hours late on Friday and we started the series about an hour and a half late, playing through till around 10:30. After that we headed over to The Nest by the Days Inn and closed that bitch out with a bit of food and a lot of beer. 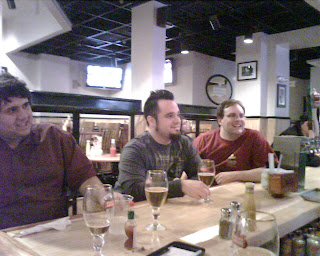 Big love to the owner and bartender who showed us a damn good time. 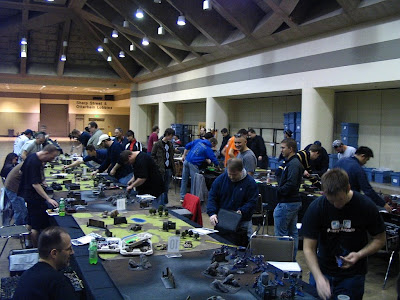 There was a decent amount of terrain on every table I saw, and the scenarios were pretty similar to the first two qualifiers. With 2 minor losses and a major victory, I came in 24th of 46 players, just under the 50th percentile. The two guys that beat me went on to win 10th and 11th place. 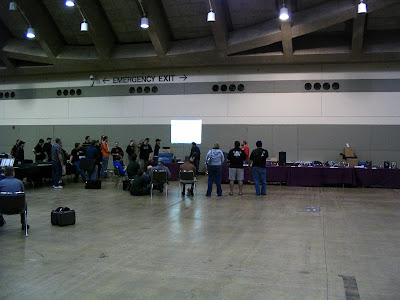 At the awards ceremony. The guy that won 1st (chaos demons I believe) wore sunglasses all the time like a world series poker personality. I figured that was how he had won until the netz apparently exploded all over him. Eh, whathaveyou. I'm not going to fight him for the choppa trophy. 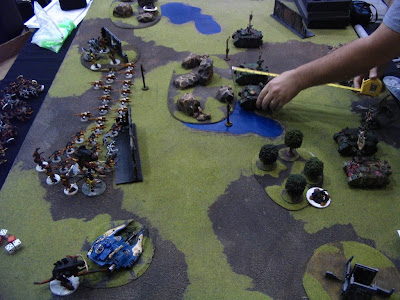 I drew Doc as my first opponent at table 9. Fun game, nice guy. He had a flying nurgle demon prince with warptime, 50 plaguemarines in rhinos, 3 obliterators, and a bunch of nurgle terminators. He was probably in control of the game for the most part, though I did kill a ton more plaguemarines than I thought I would. Barbed stranglers were key in this endeavor. He ended up with a minor victory, only because my without number gaunts arrived just in time to contest my closest objective marker. I outflanked with 4 of my 5 stealer squads, probably 4 too many, although it did allow me to easily eat his big terminator squad which deep struck to close to the table edge. 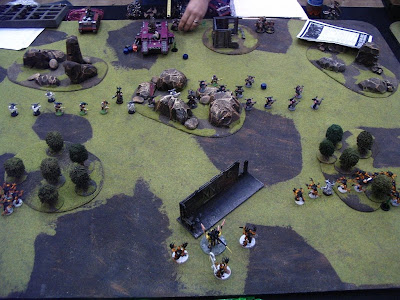 My loss took me down to table 15 or so, pairing me up against a necron player that went on to get the last place prize (a WFB boxed set). However there was some issue with the two guys at the table next to us, either they knew each other or had just played each other...? In any case the ref swapped our opponents and I ended up playing Greg and his chaos army. He had Abaddon, a lash bike sorceror, a small squad of chosen in a rhino, 30 noisemarines with sonic blasters, berzerkers in a land raider, 3 obliterators, 10 mok marines in a rhino, and a bunch of lesser demons. Our exchanges were terse at first but things loosened up as he started to kick my ass. One and a half stealer squads made it to charge the noisemarines on my first turn, but when the initial assault only took out half of their number, the mok marines and lesser demons reinforced the fight on my left side and Abaddon wiped the stealers out on the right. His 5-man chosen came in on my right and flamed the hell out of a third stealer squad, and it took me like 2 more turns to finish them off. By this time I was in survival mode to keep my home objective. He was really good about bouncing his ICs around between squads in order to give support to the right units at the right time. One stealer squad outflanked on my left and started towards his objective in the center, but were intercepted by the mok marines and finished off. The land raider and berzerkers made it just short of my objective thanks to some big trees that immobilized the big tank. There was some more fighting in the middle but I held on the last turn and he won a minor victory by having scored more kill points. The noisemarines were awesome, and with the rise of orks lately in the meta, I'm going to have to ditch my own squad's rhino at some point and kit them all out with sonic blasters. They can really lay down some awesome shooting, even on the move. 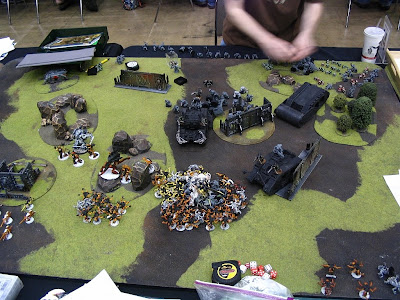 I drew up against John for my third game. I felt really bad for him, as he was a good sport even when ridiculous bad luck made his decent ork assault force almost completely ineffective. He had Ghazgull and a squad of nobz in a battlewagon, a warboss and biker nobz, two battlewagons full of burna boyz and slugga boyz, and two squads of trukk boyz. The mission rules left all troops choices off board, which was great for me and bad for him, especially when most of his troops didn't come on until the 4th turn. I took out one of the battlewagons first turn and immobilized the other. On the second turn, concentrated fire took out enough just enough bike nobz to force a leadership, which they failed, cue bosspole, ah shit failed the re-roll, 3d6 back to the table edge, adios to like 6 bike nobz and a warboss. Devourer and venom cannon dakka shredded the two trukk boyz vehicles and did the same to the occupants on the following turn. 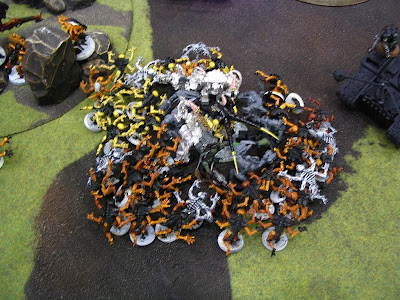 Ghazgull and company made it up to the front for the fifth and last turn, slamming their wagon through trukk wrekkage and charging into a hive tyrant, tyrant guard, and a zoanthrope. They wrecked shop pretty hard, leaving only the hive tyrant standing with 1 wound left. I responded by charging in with 36 genestealers. It took a lil bit to roll (re-rolling misses) 108 rending attacks, and I killed all the nobz but ghazgull remained with 2 wounds. The kill points spread gave me a major victory. 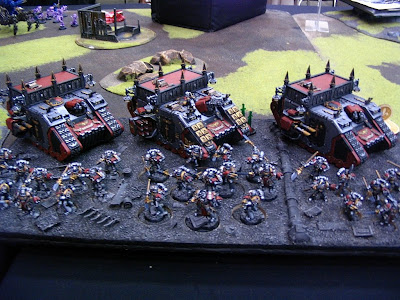 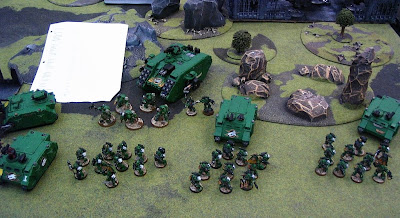 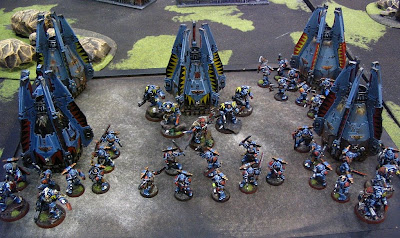 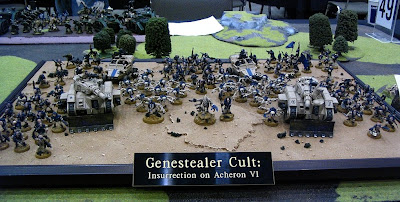 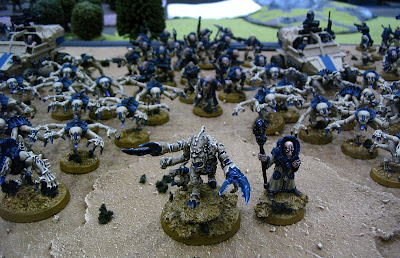 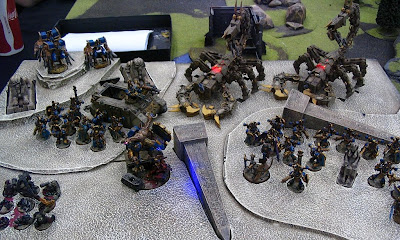 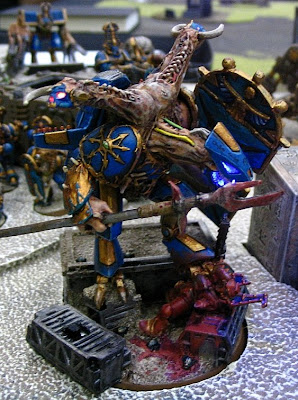 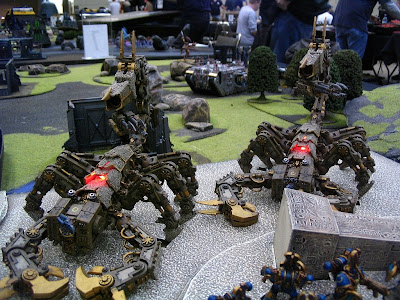 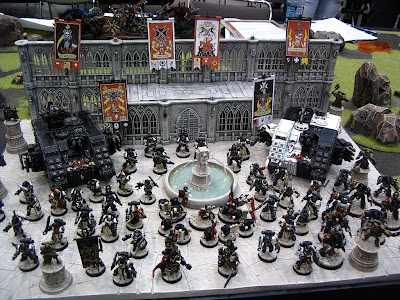 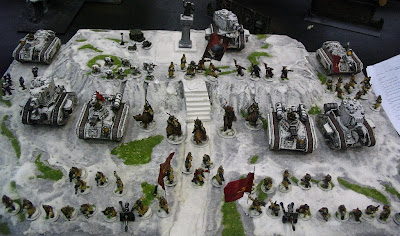 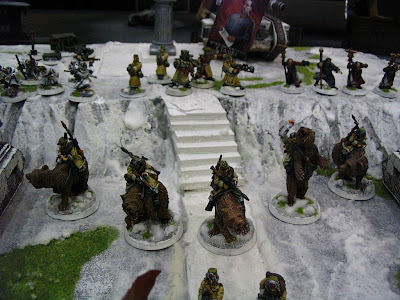 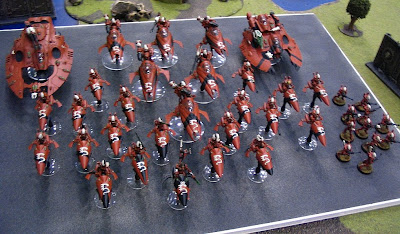 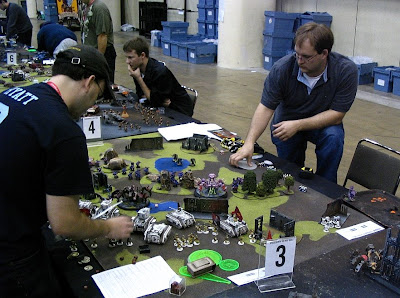 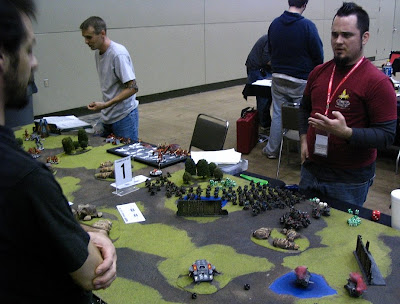 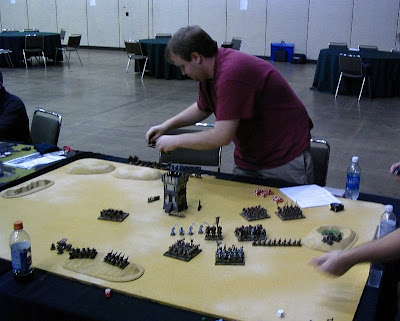 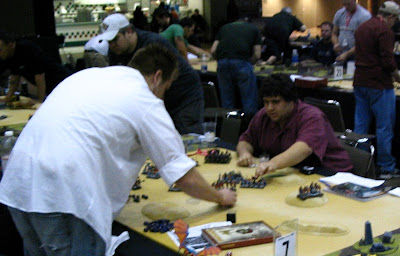 Posted by bullymike at 4:36 PM

Hey, thanks for plugging my army- and it wsa cool to meet you.

Please tell me you won that cluster fuck on a combat against the orks!