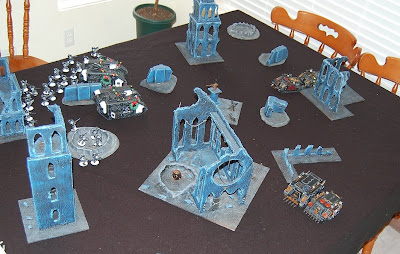 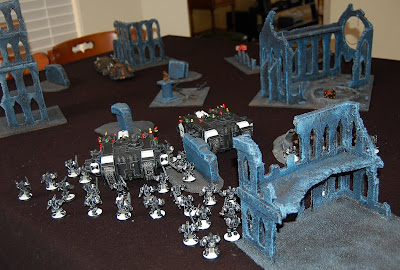 Jay came over today with his Christmas Black Templar army, which will apparently be featured on BOLS pretty soon. He had a marshall with a thunder hammer, emperor's champion, one assault and one shooty squad of terminators, four squads of ten marines in power armor with a meltagun and powerfist sergeant each, and two land raider crusaders. It sounds silly when you write it out but this is a very cool looking army with the xmas lights, wreaths, snow basing, and holiday-themed squad markings all combining to create a very unique look. Unfortunately for me, it is also a bitch and a half to play against. I fielded a familiar chaos list:

The mission was annihilation with spearhead deployment. Jay won the roll to go first and chose his corner. During deployment I decided to put Abaddon in reserve separately from the terminators, since I was going to try a general divide and conquer strategy and I wasn't sure where the need would be greatest. I deployed the plague marines and noise marines on my right side, with the berzerkers and thousand sons on the left. I failed to seize the initiative and the game was on.

The crusader on my left moved the full distance while the other moved up to shoot its multimelta and assault cannon at my noisemarine rhino. The noisemarine rhino survived a volley of fire, only getting shaken. I flanked out long on my left at first and pulled back a bit on the right. The noisemarines jumped out and laid a crappy volley into the closest crusader squad, killing nothing. On Jay's second turn, the assault terminators charged forth in their LRC into the thousand sons, wiping them out in one round of assault. The plaguemarine rhino was charged by the shooty squad of terminators and the marshall and it exploded, killing one terminator and one plaguemarine in the process. The noisemarines ran over to assist the plaguemarines, while the berzerkers sought to avenge the thousand sons. Abaddon, an obliterator, and the demons joined the fight on the left, and the khorne marines charged in with the demons after some concentrated fire. They were successful, but the chaos survivors were charged the next turn by the closest squad of crusaders. The obliterator was quickly popped by a LRC multimelta. On the right, the plaguemarines and noisemarines killed only one or two more terminators and were both wiped out when a crusader squad joined the fight.

The terminators came in on my third turn, and I tried to deep-strike them in behind the crusader on the right, but they scattered out of effective range. Another obliterator came in on the left and only stunned the LRC with his multimelta. Abaddon charged in to the big fray on the left but rolled a bastard "1" on his first foray of CC for the day; thankfully he saved the wound though. The demons and berzerkers tied combat with the 7 or so crusaders left. Abaddon had much better luck in the next turn, wiping out the survivors singlehandedly! On the right Jay turned around with the other LRC after the marshall and last two terminators jumped in for the ride. He shot at my terminators in cover with several meltaguns and the LRC assault cannon to no avail. They jumped out of cover and tried to chainfist the LRC, penetrating the big tank but only stunning it. Back on the left, the berzerkers moved up with their massacre roll, and I used their icon to bring my last obliterator down inside 6" of one of his LRCs. I made all the right rolls and exploded it. Abaddon and the obliterator moved up through cover, the berzerkers jumped inside the thousand sons rhino, and the demons hid in the back for the rest of the game along with the berzerker rhino. My terminators were wiped out by the marshall and his buddies, though I would have finished off the buddies if it weren't for my shitty chainfist trooper. In my last turn, I shot up a crusader squad on the left with obliterator plasma, and the ensuing leadership brought it within charge range for Abaddon. He killed seven off the bat, bringing it down to just the sergeant, while the berzerkers charged another squad and brought it down to two. And the buzzer signaled the end of the game, with Jay up 8 KP to my 4. Any game with 2 fully painted armies is already great game, but this one was also a lot of fun (even though I got creamed).
Posted by bullymike at 5:28 PM

Abaddon man, what a whore.

I still say him with the termies in a land raider is scarier.

oh no doubt. it's in the works eventually. put him in the tank with some slaanesh terminators and go to F town. i'll do it up in black legion colors and whatnot.

even though he bricked on the first assault, he killed 7 marines twice in our game. blat!