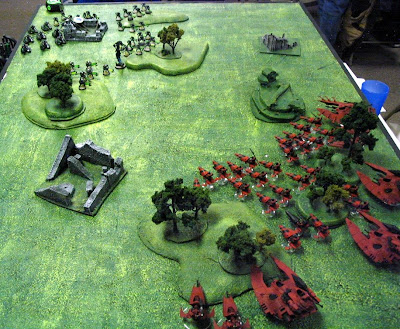 I had an epically silly game against Jay last night up at BFG. I wanted to get a game in with the Saim Hann now that they have a bit of color on them. Jay brought his awesome necron army, including the Nightbringer, 3 squads of 10 warriors, 1 squad of 10 immortals, 2 squads of 4 destroyers, and 2 monoliths. Here was my list:

Yes, I gave the farseer 4 psychic powers, which does indeed seem pretty ridiculous, but I wanted to see which powers I really used and which ones I could live without. As it turns out, fortune and doom were the most useful and I’ll probably stick with them for the future. Guide is pretty useless for this force since most of the dakka is twin-linked, but I want to give mind war a little more time to see if it can earn its value. Instead of guide I’ll add star engines to the dire avengers’ serpent to help it get across the table faster.

After winning the MIR (most important roll), I decided to go second. I thought about putting everything in reserve, but I got a little paranoid at the last second and started the whole army on the board. I failed to seize the initiative, and he moved his forces up and unleashed a ton of strong gauss from his destroyers and immortals. One squad of jetbikes was wiped out right off the bat. My farseer fortuned his own unit, and I tried to light up the Nightbringer with all my prisms, vypers, and bike shuriken cannons to no avail. On his next turn, both monoliths deep struck in right in front of me, teleporting immortals and warriors up to my front line. He opened up with nearly his entire army on the farseer’s squad, but only one jetbike was killed thanks to fortune. My starcannon vypers were brought down by a monolith gauss array. I turbo-boosted to the left with the farseer’s unit and retreated to my objective with the remaining jetbike squad. The wave serpent continued its flank approach along with the scatter laser vyper squad. I spent a turn trying to prism one of the monoliths with no effect. Of course when Jay moved one of them himself into a piece of terrain on the next turn, it was immobilized. He still used it to move the immortals forward a bit and they fired and charged into the nearby farseer/bike squad. It was a drawn combat with few if any casualties on either side. Destroyers and warrior shooting took the third jetbike squad camping on my home objective down by half. Still in range, I doomed the closest squad of warriors and nearly destroyed them with fire prism and shuriken fire, but one survived and naturally most of them got back up with the help of the monolith. Together with the destroyers they wiped out the third jetbike squad. The Nightbringer finally made it into combat with the farseer’s squad and finished it off fairly quickly. All I had left on that side were two fire prisms, one of them without a main gun. On the other side of the table, the dire avengers got out of their transport and combined fire with my scatter laser vypers and third fire prism to destroy one of the warrior squads. Reloading their weapons after the bladestorm, the avengers got back in their transport and headed towards Jay’s remaining warrior squad sitting squarely on his home objective. On the fifth turn, I contested both objectives by moving my skimmers flat out, two fire prisms for mine and a wave serpent for his. We rolled to go to the sixth turn, and he spent it shooting everything he had at the fire prisms. The holofields and cover saves held up and they somehow survived the turn. He also hauled ass with one squad of destroyers back to his corner to try and prevent my taking it. I jumped my dire avengers out and finished off the last warriors on his objective with the help of the vyper scatter lasers and seven (7!) failed armor saves. It was time for another game length roll, and jay rolled a 4: one more turn! His destroyers arrived at his home objective, opened fire on the dire avenger squad and killed half of them, sending them running back a bit. Without the aid of cover saves, my fire prisms took substantial damage this turn, but when the smoke cleared I was still left with one immobilized, weaponless tank contesting my home objective. The dire avengers regrouped and used the three inch consolidation and a six inch fleet move to grab his objective after my vyper and last fire prism had finished off the destroyers. A ridiculously cheesy win for the eldar!

Main lessons learned in this encounter:
- Spearhead is a bitch for deploying all those jetbikes and tanks. Next time I’m just going to keep them all in reserve.
- Never give up! Stick and move! It looked pretty bad in the beginning, but my flank attack with the dire avengers paid off and they survived to win the game for me.
- Holofielded vehicles are still ridiculously survivable.
- I was right to take spirit stones off of the vyper squadrons. Stunned results become shaken anyway when they’re in a squadron and I want them to be as cheap as possible (I’m still keeping the shuriken cannons!).
- Doom is pretty spectacular for taking down MEQ. Keeping that.
Posted by bullymike at 10:04 PM

I've been reading Way of Saim Hann for a while now. Combined with your batrep, it tempts me so strongly to start a Saim Hann army as well.

I've said it before and I'll say it again, I love Dire Avengers! They never seem to let me down!

Well done on getting a win with you first Saim-Hann game, I got slaughtered when I first tried it...

Still, it looks like it was a very fun game.

hahaha blow the Horn of Gondor and rally those Dire Avengers for the win!

well jay's still pretty good with them, and this list is still generally decent given the assault power of the nightbringer, the endless dakka, and monoliths to keep the warriors from being swept in assault. gd T8 on that nightbringer is a real whore!

Nice report. You know, Necrons are a tough army for Saim-Hann- they are the hardest for me to face and I have the most losses to them. WBB with a res orb negates all my AP 2 weapons, living metal takes care of my bright lances, and being very soft on the assault means phasing out is hard. Destroyer heavy armies can also keep up with my speed while pumping out S 6 shots. Good job pulling out the last minute win, cheesy perhaps, but that is the eldar way.

Seems a lot of you guys run Double S6 weapons on the Vypers now a days. Shurikan cannons with either Scatter lasers or starcannons. Is this worth it?

Lately I've moved away from vypers, retaining just one of them with a bright lance for more land raider killy and objective contesting irritation. Trick is to keep it at 36 to allow my own usual crap lance shot but more importantly to keep it from getting shot down by small arms. With the points I saved I added a seer council and autarch. Still figuring out how to use them best. Wish I could find the motivation to finish painting them all!

It's always hard to finish an army but I hope to do it some day. Just started with my own Siam Hann army I love things like the Seer Counsil and jetbikers. Just learned that Fritz uses tape to get those sharp lines on his bikes do you the same method ore are you that steady handed.

What point lvl is that list you run? since you seem to have enough for 3 Fire Prisms. must be fun linking shots and whipping marines ;)