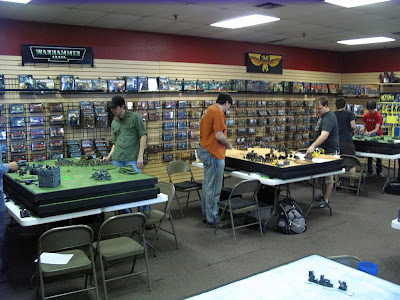 Seems like it’s been forever since I went to a regular tourney, but I guess it’s only been a couple months. This Saturday was the "tournament of champions" at Battleforge, and the top 9 players (2 people tied for 8th place) from the 2008 monthly tournaments were invited to throw down one last time to win some megadeluxe prizes (or at least a bunch of cool stuff that don’t sell too good). I finished in fourth place for the year, mostly by attending every tournament and collecting painting points the whole time; I think I placed in maybe two or three of the tourneys, but never first. Unsurprisingly, everyone knew each other and had a pretty good time. Most of the folks playing conspired to bring mostly hobbyish armies, even though the ‘eavy tourney rules would be in place. Here’s the list I played:

This was a really fun list to play, as even when I lost I still got to kick some major ass. I replaced my usual lash sorcerer/demon prince with Abaddon the Despoiler (en español: Abaddon El Exterminador) because I’ve noticed that a) a single lash is unpredictable and rarely makes much of a difference in the fight as a whole, and b) since 5th edition came out, many successful armies seem to focus on badass units that put the beatdown on your opponent rather than obsessing about troops and scoring the most objectives (for more on what I’m talking about, read Goatboy’s recent post on Bell of Lost Souls). One thing I might change with this list for next time is to drop the berzerkers and thousand sons squads down to 8 each to add 2 two terminators and 2 lesser demons. Ten berzerkers/1k sons are not that much more effective than 8, and I want to try beefing up Abaddon’s unit to make it even more devastating. It’s really too bad he doesn’t make his own unit fearless; for 275 points he damn well should grant some sort of extra tactical advantage like the marine characters. I only rolled a 1 for his demon weapon once, and of course it took away his last wound. I did forget that he gets to re-roll unsuccessful wounds, which might have actually turned the tide a couple of times, but oh well. I had 3 fun games and a great wrap-up to the 2008 tourney season at BFG. Here's some more pics: 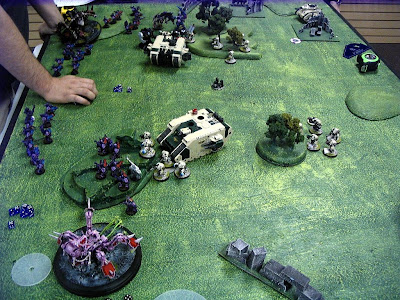 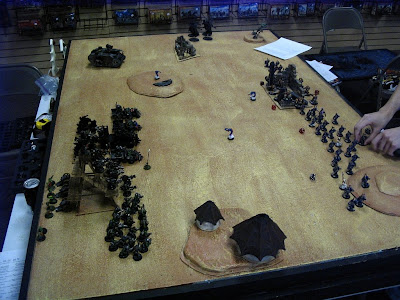 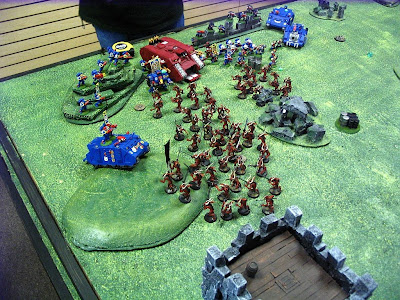 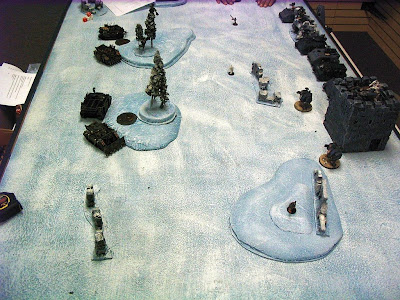 Josiah was fielding a master of the forge, librarian, 9 sternguard in a rhino, 25 tactical marines with 1 lascannon and 2 heavy bolter razorbacks, 2 venerable dreadnoughts, 1 ironclad dreadnought in a drop pod, and a thunderfire cannon. This game started off really well for me. On my left, the noisemarines wiped out one combat squad and fought off a second squad and a librarian with the help of the lesser demons. Even though I forgot that drop pods can come in on the first turn and the ironclad was all up in my business, an obliterator came in on time and blew it up. On my right, the plague marines drove up to claim an objective near his deployment zone. I got a little greedy though and jumped them out to melta one of the venerable dreads that was heading towards my relatively defenseless thousand sons. I should have either stayed put on the objective or used the rhino fire point to melta him instead. As it was, I only blew off his close combat arm and the plaguemarines ended up tangled in close combat with the dread and a marine combat squad for the next two or three turns until an obliterator could come over and help. By then it was too late and I wasn’t able to get the right side objective after all. In the middle, the berzerkers drove up and brought down Abaddon. My main goal was to keep his remaining forces away from the center objective that my berzerkers would try and hold. Abaddon and his bodyguard were swarmed by the master of the forge and the sternguard and the big baddie eventually died after failing to save a wound from the demon weapon. The sternguard moved up and contested the middle objective. He also contested the Thousand Sons’ objective with one of his surviving rhinos. We ended up getting a draw on the primary, and he earned the secondary and tertiary. 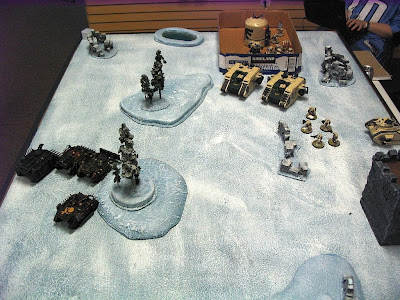 Jay had Belial, 4 5-man terminator squads, 1 of them kitted out for heavy assault, a multi-melta dreadnought in a drop pod, a predator annihilator with heavy bolter sponsons, a land raider, and a land raider crusader. Holding Abaddon and my oblits in reserve, I veered left with the rhinos and set up a squeeze point between two wooded areas, blocking the space off at first with my rhinos. He charged in with the two Land Raiders, assaulting the thousand sons rhino barricade on the right with Belial's awesome CC unit, and the plaguemarines in the forest on my left with another squad of terminators. A third squad deep struck in further on my right. The plaguemarines were brought down to the 2 meltagunners but the champion survived long enough to wipe his opponents out. I opened the blockade and poured fire into belial's squad with the thousand sons, noisemarines, berzerkers, and one obliterator, then charging them with the lesser demons, berzerkers, and noisemarines. The combined chaos horde wiped out the rest of his terminators. The nurgle marines circled around and melta'd the godhammer land raider, and an obliterator destroyed the crusader. To cap the day off, Abaddon had an epic dreadnought kill . I destroyed everything but the predator and the drop pod, and won the primary and secondary and a bonus point. 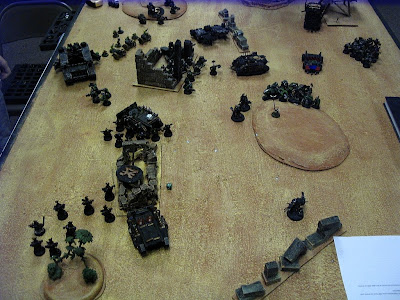 Colby was running far fewer orks than the last game we played, but there were still plenty to go around. He had a warboss biker with 4 nob bikers, a big squad of shoota boyz, a squad of tankbustas in a battlewagon, 2 squads of trukk boyz, a squad of 'ard boyz in a trukk, a small squad of deffkoptas, and a shokk attack gun big mek hanging out with a squad of lootas. I decided not to deep strike anyone for this game, putting abaddon in the center to draw fire and reacting to his movements with the cult troops in their rhinos. I went right with my noise marines and left with the thousand sons and berzerkers, trashing the two trukk boyz' transports with obliterator lascannon fire. The thousand sons took up position on one objective, losing their rhino to rokkit fire from the bustas in the battlewagon. I had to send the nurgle marines over to finish off his battlewagon with their meltas, but I eventually ran them back to help out in the center. The noisemarines jumped from their rhino to attack the biker nobz which had just turbo-boosted into charge range. They inflicted a few wounds with the doom siren and pistols, and wiped them out in the subsequent assault. They were counter-attacked by the ard boyz and a squad of the trukk boyz and finished off before the demons could come in and reinforce them. Instead the demons jumped in front of Abaddon's line to try and fend off the trukk boyz that were moving towards the objective I was sitting on in my DZ. Again Abaddon was brought down, but not before fighting off 2 squads of trukk boyz nearly singlehandedly. The berzerkers did eventually have to jump in and finish off the stragglers. The big mek rolled a double 1 for his shokk attack gun and vaporized himself and a few of his buddies nearby. The survivors broke and ran (with a little steady prodding from my noisemarine rhino). The 'ard boyz had jumped back in their trukk, moving to reinforce his assault on my "home" objective. Unfortunately we ran out of time on the 5th turn and I was left holding 2 of the objectives, giving me the primary and him the tertiary.
Posted by bullymike at 10:37 PM

Thanks for this write up mate, it was a very good read and the pictures are really useful.

Also, very well done on placing fourth, its a good reward for your commitment!

Nice report. I am glad to see you blogging again.