The 2009 Battleforge 40k tournament series kicked off last Saturday with a 2000 point ‘eavy tournament. Everyone brought mean cranky lists to try and beat the hell out of one another. There was about 15 or so people there, familiar faces all, with all kinds of different ridiculous armies. Abaddon and the rest of my black legion chaos force stole my space wolves’ land raider from their shelf in my display cabinet and took it for a ride:

It was a pretty small army but I hoped the land raider would give Abaddon a better launching platform and make him more of a game-breaker. And it actually might have if it hadn’t been destroyed in the first turn in both my second and third games. I’m still going to keep using the big tank though, now just I need to pick up a bonafide chaos land raider. I also brought back the lash prince instead of the greater demon, exchanging the points for the thousand sons’ rhino. Definitely the better choice where mobility is concerned and he combos with the obliterators’ plasma for some really good killy on terminators and the like, but I still haven’t mastered using him without getting him waxed after only the first lash or so. The thousand sons are great even without a rhino, and can make a stand anywhere since they don’t need cover to get the invulnerable save. They can also serve as pretty tough bait for enemy assault units, who I can then counter-assault with berzerkers or abaddon ftw. The best part about this tournament was beating Black Templars not once, but twice! Rerolling to hit doesn’t mean much when Abaddon wipes entire squads out in one round of combat. Your zeal, it is not so righteous after all! Muahaha! Die bitches! 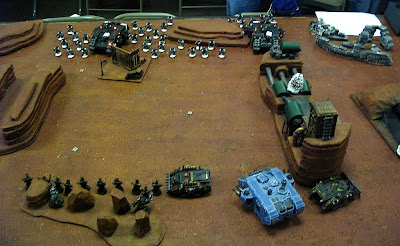 For like the third tournament in a row now, I was paired up against Jay’s xmas black templars in the first round. I was pretty used to his list at this point: thunder hammer marshall, emperor’s champion, 1 small squad of lightning claw/thunder hammer terminators, 1 small squad of powerfist/assault cannon terminators, 2 land raider crusaders, and 4 squads of crusaders with powerfists and meltaguns. The objectives were spread out pretty evenly, and I rolled to go first. I didn’t do much but lash one of his crusader squads and push it back a little bit. Out of 5 lascannon shots I only managed to destroy the multimelta on one of his LRCs. As usual, jay charged forward with his land raiders and crusader squads, popping smoke. The shooty terminators jumped out of the LRC on my left and popped the berserker rhino, killing a couple of the passengers. I lashed the terminators into a ball and opened up on them with 2 obliterator plasma shots and a ton of thousand son inferno bolts, killing most of them and sending the sole survivor running. My plaguemarines drove forward on my right side and popped smoke. On his next turn he jumped the emperor’s champion and his punchy terminators out of the LRC in my center right and assaulted the surviving berzerkers, easily slaughtering the entire squad with furious charge before any had a chance to strike back. He also brought down the demon prince with the other LRC’s hurricane bolter and assault cannon fire. Finally I jumped Abaddon out of his raider and fired a few combi-meltas into his assault terminators, but the little pansies broke and run before I could assault them. As they continued to fall back, I assaulted a nearby crusader squad with my plaguemarines and kept terminators running by being within 6”. His marshall jumped out of the LRC on my left and charged into the thousand sons. They fought it out for three combat turns until my sorceror’s force weapon finally found its mark and brought the bastard down – first force weapon kill ever for him! The 2 obliterators on my left finally wrecked one of his LRCs with twin-linked melta and the obliterator on my right exploded the other. With the templars in full rout I earned a full point victory.

I played against Kingsley in the second round. He had borrowed a friend’s eldar army and used it to great effect to get up to the first table: farseer with doom and fortune, an avatar, three squads of dire avengers, a small pathfinder squad, two squads of 9 fire dragons in wave serpents, a stock vyper, and two wraithlords, one with a bright lance and rocket launcher, the other with a bright lance and wraithsword. I knew this one would be tough, since my army was designed more for fighting marines than slippery pointy ears. I got first turn again, and advanced my rhinos and land raiders towards the center, popping smoke. The berzerkers went slightly left while the plague marines went towards dead center. I started the thousand sons fairly far forward, and used lash and their inferno bolts to kill a few avengers in one of his nearby squads. The obliterators inflicted a single wound on one of the wraithlords. On his first turn he shot the land raider with his first wraithlord bright lance and got an ‘explodes’ result, killing one of the terminators inside and pinning the squad right off the bat. I think he also killed the demon prince in the first turn, too. I charged into the surviving dire avengers with my plague marines and they fought off harlequins and wraithlords for like 4 turns before finally dying. The berzerkers killed off a second squad but were easily massacred by the avatar. Abaddon wiped out an entire fire dragon squad by himself and almost survived to fuck up the pathfinders holding Kings’ home objective, but was brought down in the open by heavy fire in the fifth turn. Kingsley earned full points to my zero. 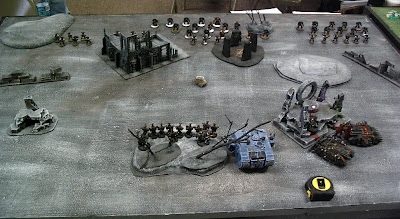 For the third round I was paired up against another black templars army, this time fielded by Jim. He had an emperor’s champion, 2 castellans in terminator armor, 5 squads of double assault cannon tank hunter terminators, 4 squads of crusaders with rocket launchers and plasma guns. Once again I rolled to go first and plowed forward with the land raiders and rhinos. I lashed the squad of terminators with the champion and pounded on it a bit with plasma cannons, killing a few. The thousand sons also moved up and took out a few marines with their inferno bolts. Jim responded by wrecking my obscured land raider with his tank-hunting assault cannons, but at least Abaddon and his buddies weren’t pinned this time. The berzerkers got busted out of their transport, too, and just managed to wipe out a crusader squad on the right side before getting shredded by the terminators. Between Abaddon (who in grand tradition lost his last wound to his own demon weapon), the plague marines, the thousand sons, and the demon prince, I managed to wipe out everything he had by the fifth turn and earned full points.
Posted by bullymike at 9:11 AM

I was excited to see the objective blew up at the perfect time-- right next to Abaddon. It was a little anti-climactic that it did nothing.

It should definitely blow up each turn-- like a geyser of plasma or some such-- or blow up with a S10 large blast.

Between Abaddon and the plasma cannons, it is hard to hide from that Chaos army. I think the three Obliterators killed just as much as Abaddon.

Abaddon is a whiny bitch.

Aww hey look everyone its the 2 black Templar players I beat! I'm sorry, I can't hear you guys that well since your souls got eaten by drachnyen. Try sticking your face out of the blade a little farther when you cry...

I feel like I should chime in here since I whooped up on Mike... however I hate Black Templars too so cry some more! haha

Kings, but you played cheaty Eldar-- and someone else's Eldar at that!

Black Templars may cheat more than Orks, and that's saying something.