Awww hell. Another tournament come and gone, this one a 1750 pointer up at the lair. In an effort to encourage myself to get back on the painting wagon, I decided to start the year off with my eldar:

The fire dragons did ok, they're essentially a cheap suicide unit but they can take out vehicles fairly reliably.
I liked the mass dakka that the vypers can put out but even a light breeze can knock them out of the sky. I went 1-2 for the day and had fun zipping around with the Saim Hann. 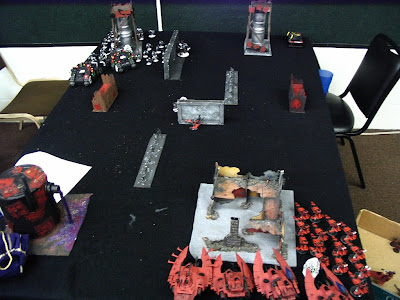 I drew Jay for my first game. He was playing his epically cheap Holiday Templars, complete with a marshall, emperors champion, venerable dreadnought, 3 squads of 10 crusaders with meltaguns and powerfists, a terminator squad, and 2 LRCs. This was played with dragon lairs communication breakdown mission, essentially the command and control mission with weighted killpoints to determine margine of victory. The other twist is that each player must put an hq unit in the center of the table to represent a meeting of minds gone bad. Well last week I got to kill Eldrad with Abaddon thanks to this stupid rule, so karma paid me back in full with jay rolling to go first and his emperors champion easily slaughtered my bike Farseer. After that his whole army essentially moved towards me for the kill. I left my tanks and transported troops on my left side and zoomed around to the right with the jetbikes. I was able to destroy one of the land raiders but most of my other shooting was ineffective. I held my vypers in reserve for some reason, which was pointless but I still did it in both of my other games Saturday. I contested my own objective and forced him down to a minor victory. 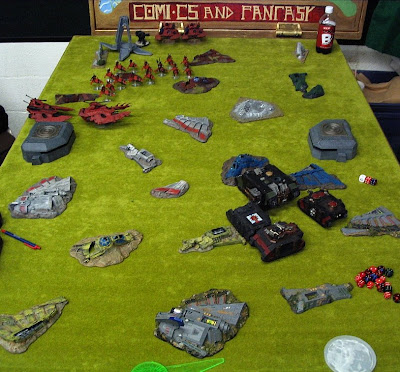 The 2nd round was played using another custom mission called Evacuation. Basically at the beginning of each person's turn after the 1st, they rolled a reserve roll to see if any of their foot troops within 6" of the center would be taken off the board. If so each unit earned 1 kp. Otherwise weighted kill points were in effect, added to your evac points to determine a winner. Josiah had Vulkan, a canoness, a priest, and some celestians in a land raider, an ironclad dred in a droppod, a small marine squad, a small outflanking scout squad, and a couple of sisters of battle squads. I was already at a disadvantage because only foot troops could be evacuated by the shuttles, so that meant I would only be able to get 2 killpoints from that. I was doing ok flying around shooting things when he somehow managed to charge my Farseer's squad with the land raider gang and it essentially ended the game. He evacuated most of his units, but I had evacuated both of my squads that I could and killed just enough things to hold him to a minor victory. 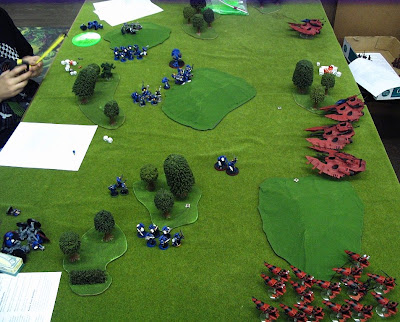 More marines. This time I was paired against a kid that had played 5th edition maybe 3 times total, and actually brought the 2nd edition marine codex to play with, so it turned out a little one-sided. The mission was seize ground with 5 objectives, and I held 3 objectives to his 0 for a massacre.
Posted by bullymike at 10:22 PM

Thanks for your report mate, I don't know how you manage to keep them so concise, mine tend to ramble horribly!

It seems you got horribly screwed over by the missions. Loosing the lynch pin of an Eldar army (Farseer) through no fault of your own must suck!

Anyway, I hope you had fun regardless!

way to stick it to that kid!

Please kings. I tried to be patient at the beginning of that 3rd game but let me break it down for you. He didn't have his own tape measure, codex, and he had a total of like 6 die including 2 of those teeny tiny joke ones that he would actually try to use.
I was probably a little prickish towards the end, but I just wasn't in fun 40k tutorial mood, and he was acting like he could give 2 shits about the game, whatever. We aren't all meant to be great teachers, and a tourney is not the best place for that anyway. I mean someone else had made his list for him on the spot and he was getting his marine rules and stats from the back of the rulebook... No real issue with him personally but it might have been better for him to play a few more friendly games before a competitive event.

I don't know why I keep leaving things in reserve either. I feel like I'm being smart when I do it, but after the game I always feel dumb.

But then I do it again.

One day it will actually work out for me, and I'll have to savor it and then finally retire the tactic.

Yeah, I was slightly annoyed at the building on the spot thing too. And there was more than just him that came unprepared. C'mon people, it's not that hard.