Went to the second 40k tournament of the year last weekend at Dragon's Lair. Good to see Larry back in the store. We played using the standard missions and deployment schemes. At first I was going to run a double land raider variant of my chaos list, but decided to take the imperial agents out of the barn for a spin. The main reason was that I wanted an excuse to try out Celestine. I've had the model painted up for some time but always played her as a humble canoness. She never actually died in any of my games, but never quite lived up to the legend either. The inquisitor and mystics worked extremely well on several occasions - with all the different forms of deep strike available and general resiliency of the troops that use it they are getting to be a must-have now for any imperial force. Assassins... not so much. The Callidus made no real difference in any of my games. I want to build a full-on mech sisters army later this year, because I think more sisters would be better than mixing in the guard infantry. 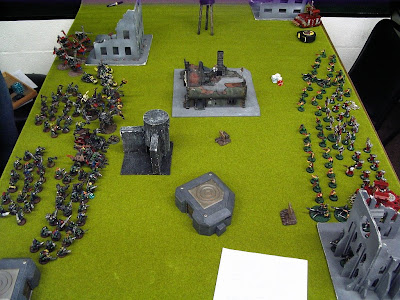 Nathaniel W. was my first opponent of the day for the first round, using the seize ground scenario with pitched battle deployment. He had a pretty mixed force of orks, which I came to discover was much more effective than it used to be before the newest codex. He had a warboss and nobs in a trukk, a big mek with KFF, 3 deff dreds, 5 koptas, 6 lootas, 10 'ard boyz in a trukk, 20 shoota boys, 2 mobs of 20 slugga boys, and 5 regular warbikes. I grounded the boss and nobs early on, so they just sat on an objective near his deployment zone while the rest of the force headed straight for me. It took a couple turns to wipe out the fastest attackers (bikes and koptas), and I killed two of the deff dreads, but the rest of the force survived to roll my gunline pretty bad. The 'ard boyz drove over and took out my retributors and inquisitor squad before I killed them off. I had a few good rounds of screening and shooting with the guard and sisters squads but my luck was terrible overall and Nathaniel seemed pretty experienced with orks. By the end of the game he was up 3 objectives to my 0, giving him a massacre win. 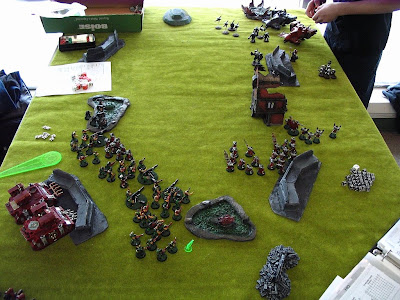 I've forgotten my opponents name for the second round, sorry. We were playing the capture and control mission with spearhead deployment. He only had 1860 points of tau on the table and he hadn't been playing for very long, so it played out a little one-sided. His list included a ethereal, a battlesuit hq, two squads of two battlesuits, two squads of stealth suits, a squad of kroot, a squad of gun drones, a fire warrior squad, an honor guard squad, a sniper team, a hammerhead, and a pathfinder team. I flanked on the right with celestine leading the seraphim and sisters squads following up behind. While the exorcists and heavy bolters tore apart his vehicles and line infantry, the flankers rolled through the kroot, fire warriors, and ethereal with little trouble and captured his home objective, giving me a massacre win. 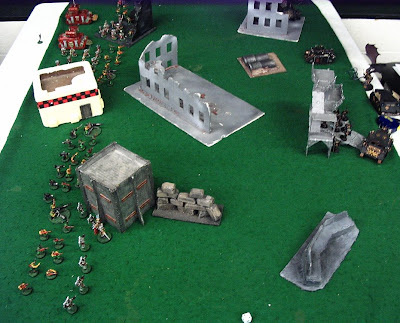 I drew the other Nathaniel (M.) for the third round. We played annihilation, using a weighted kill points system, and dawn of war deployment. He had a tzeentch demon prince, a lash sorceror with wings, five terminators, three squads of plaguemarines in rhinos, three obliterators, a defiler, and a vindicator. I took second turn and spread out my forces in a long line in my deployment zone with my initial infantry and reserves. Probably the best moment in this game was when his terminators scattered in just the right place and the inquisitor activated the seraphim with his mystics to divine flame the hell out of them. His demon prince didn't come on until the fourth or fifth turn and I managed to shoot him up before he could do any real damage. The plaguemarines were tougher but I mostly ignored them to shoot everything else. His defiler and vindicator took a long time but they finally went down to my weak ass exorcists. This was a fun game because I could just concentrate on shooting and maneuvering with the gunline rather than try and gamble for objectives. I ended up winning with a massacre.
Posted by bullymike at 7:53 PM