More of the Saim 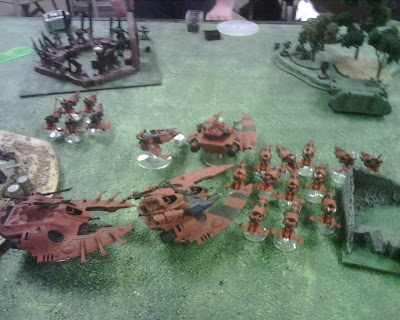 I've stalled out a bit on the jetbike army but hope to get back at it in the next few weeks. I played one game with them against Kingsley's Mantis Warriors a few weeks ago. It was fun even though I lost in the end. We were playing capture and control with spearhead deployment, if I remember correctly. I didn't play the eldar command unit well and also let one or two jetbike squads get assaulted, which never should have happened. I think the army might perform better after I get more experience with the art of evasion. And bah to the eldar codex for not giving me a way to use the last 4 points I have left over!

You can get closer by giving your Autarch an Avenger Shuriken Catapult for 2 points.

Then if he ever gets stuck with the Dire Avengers, he can also Bladestorm.

Or take two Singing Spears off the Warlocks and give the Autarch a Fusion Gun. That doesn't make any sense, but if you are obsessive/compulsive and need to have your list exactly 2000 points, then that'll do it.

I think the main reason that you didnt win this battle report was that you forgot to use the Way of Saim Hann and not write a battle report that you lost... maybe next time you will remember the tricks Fritz uses :)