A few Saturdays ago now, Kingsley and I drove out to Killeen to play in Battlefield Games' "Valentine's Day Massacre" tournament. Neither of us had been to the store before but we were happy to find out it was fairly open with plenty of space, tables, and terrain to play. The owner was a real nice guy. The scoring system really emphasized the soft scores; in each game you could earn 20 battle points, 10 appearance points, and 10 sportsmanship points. Kingsley ended up winning the whole thing, with the first, second, third, and fourth (me) places all one point apart. I put off writing up this tournament for a while so please forgive if I keep the game descriptions brief. All the missions were based on victory points with additional bonuses for the round's specific mission. I borrowed a defiler and took chaos: 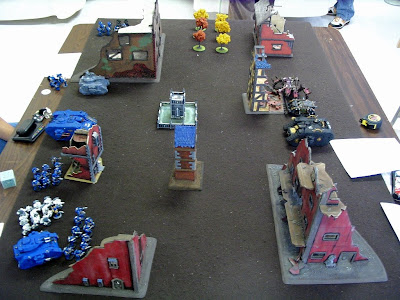 First game was against a friendly younger dude, hadn't played for very long but still knew most of the rules. He had a very generalized ultramarine army, with a commander and honor guard, a couple tac squads, a land raider, 2 lascannon predators, some terminators, and a small assault squad. I belive the mission was something like recon, where you got points back for your scoring units in the enemy deployment at the end of the game. I held back with the defiler and obliterators and charged forward with everything else. The thousand sons started off on my far right opposite a dev squad and some terminators but I moved them more towards the middle to bunch up with everyone else. He didn't much try to get any recon points so I won with a massacre. My second opponent was overly jocular and familiar before the game started but it only took a minor rules argument to send him into the pout zone. He only emerged when he started winning the game. Not sure what his problem was, although it did seem to be frustrating him that he had to babysit while playing in a warhammer tournament. He had a generalized tau army, with a battlesuit commander, a small squad of battlesuits, a stealth team, three or four fire warrior squads, a piranha, a squad of kroot, a gun drone squad, a broadside squad, a hammerhead, and an ionhead. We had a couple messenger models we had to escort to the enemy table edge to get the extra points for this round. He popped the land raider and the thousand sons rhino in his first turn, which slowed down my advance some, and my defiler rolled a 1 for fleeting towards the stealth team, so he got nuked with a fusion gun. Abaddon and the plaguemarines did the most damage, clearing a hole for my messengers to escape, but the rest of my army was slowly shot to pieces and he ended up winning with a massacre. Possibly my least favorite game of 40k in the last couple of years. 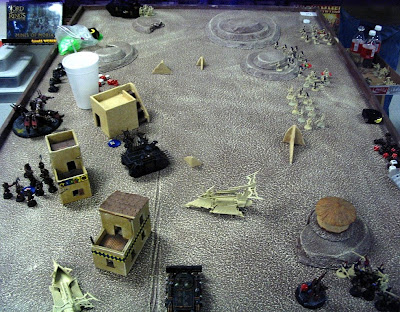 Third opponent was a nice guy with a mostly foot-bound dark eldar force. It consisted of an archon with incubi on foot, 2 squads of wyches in a raider plus one on foot, a small squad of scourges, 4-5 squads of warriors on foot, and maybe a few other things. We had objectives that troops could pick up and take with them, the goal being to hold the most at the end of the game. It was a escalation-style deployment, with just an HQ and some troops able to start the game on the table. While the defiler, thousand sons, lesser demons, and obliterators nested on my objectives, the plaguemarines went right and abaddon and the berzerkers went left. He did have some tragic bad luck, especially with leadership tests, but overall dark eldar on foot can't stand up to the shooty elements in my army and I ended up blowing him off his objectives and winning with a massacre. Even when the random game length ended the game in the 5th, we kept playing it out until I had wiped out everything he had.
Posted by bullymike at 10:28 PM

Nice tournement Mike, looks like you did well for yourself.

where did you end in the overal rankings?

Did you know you can create short urls with Shortest and receive money for every click on your shortened urls.