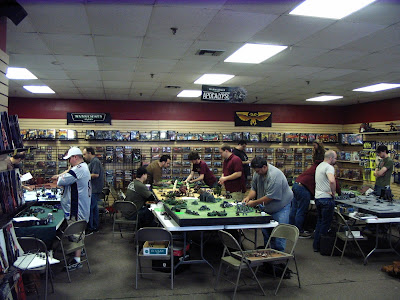 Saturday was the first “hobby” tournament of the year at Battleforge Games. I painted up a few more ratlings and played a doctrines Imperial Guard list:

My general plan was to hold my chimeras in reserve and deep strike the other two infantry squads for late-game objective grabs while the gunline blasted away at everything and the eversor played either offense or defense depending on the opponent. My first two opponents were playing generally assault-oriented armies and this tactic worked well at defense but I couldn’t fully grab a win. The third game was against another shooting army, but in that situation guard usually wins over tau so I didn’t learn too many lessons there. It was a fun tournament with 3 friendly opponents, but I didn’t end up placing.

Here's a couple of other games: 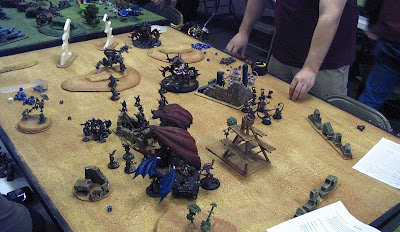 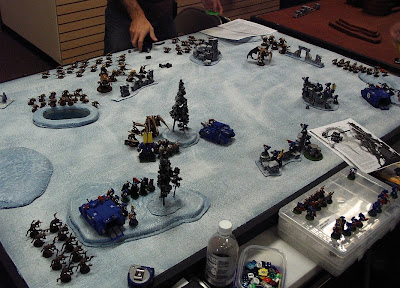 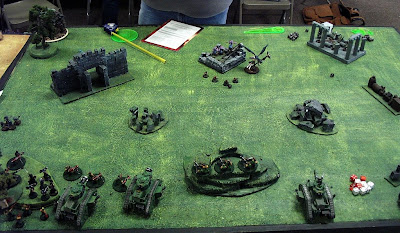 Adam took a mixed tzeentch/nurgle army with fateweaver, a great unclean one, 2 squads of plaguebearers, 2 big squads of horrors, 2 squads of 3 screamers, 2 squads of 3 flamers, 3 beasts of nurgle, and 2 soulgrinders. He had pretty bad luck with his deep-striking, which resulted in the GUO and 1 of the soulgrinders not playing much part in the game since I was able to place them in a far corner. We placed our objectives in opposite corners and he won the first roll and chose to go second. I castled up in my objective corner with everything but the 2 chimera squads, which I sent towards his home corner. First turn brought Fateweaver, a soulgrinder, 1 squad of flamers, 1 squad of horrors, and 1 squad of plaguebearers. His flamers eradicated my ratlings right off the bat with no problem, but his horrors were shot up pretty good by the mystic-assisted inquisitor squad. The initial plaguebearers held down on his home objective and went to ground every time I shot at him, meaning I would have to try to contest. The units in chimeras threatening his objective worked well as a distraction for Fateweaver and one of the soulgrinders while he straight up attacked with everything else. I tried my damnedest to kill fateweaver but he survived the game with 1 wound left. With the mystics and the rest of my gunline I fended off a second unit of screamers that deep-struck right on top of my home objective in the fifth turn, and fateweaver and a soulgrinder destroyed my chimera that was the last hope to contest his objective for the win. The game ended in a draw. The eversor didn’t accomplish much more than killing a unit of screamers that had just destroyed one of my demolishers. A fun and even game. If I had to play it over again, I might space the gunline out a bit more to make close-up deep-striking harder and play more aggressively with the demolishers to keep them in killing range of the soulgrinders. MVP was definitely the inquisitor and mystics, so damned good, but I really need to equip him with a psycannon (I left it off cause I don’t have a wysiwyg model yet) to kill fateweaver and other big demons. Robert took his usual dark eldar force, which I’ve played against several times now. He had an archon on a bike with 5 more bikers, a dracon with a bunch of incubi in a raider, 3 squads of warriors with 2 dark lances each, 2 raiders with 10 wyches, a beastmaster and 5 warp beasts, a talos, and 2 ravagers with destructors. The objectives ended up spaced out along the deployment zone edges, 3 on one side and 2 on the other. I spread out the gunline in what little cover I had, held the chimera units in reserve, deep struck with the other 2 infantry squads, and outflanked with the veterans and the eversor. He got first turn and took the side with 3 objectives and zoomed up with the raiders on my left side and the bikes, talos, and warp beasts on my right. I killed a couple of bikes and destroyed one of the wych raiders, killing half of the wyches inside and pinning the rest. It was a small victory, since the survivors of his attack wave plowed right into my lines killing all my infantry save one fire support squad. Robert took plenty of slaves for the pits. The JO managed to kill the rest of the bikes with his powerfist minus the archon before he was run down. Next turn all my reserves except for the veterans arrived. I deep struck the infantry squads on my right side closer to his deployment zone, and the eversor sprinted into a squad of warriors, wiping them out easily and moving on to the next one. My chimeras came on my table edge. The command squad with their flamers burned up one whole squad of wyches before being squished by destructor templates. The other chimera was immobilized near one of the objective markers, and he spent the next three turns beating it up with the incubi, warp beasts, and a few surviving wyches. The talos destroyed the standard leman russ, just after I killed 3 warriors in his last squad with an ordnance template, causing them to fall back, and the eversor was close enough to prevent them from regrouping, sending them off the table. Thus we were both left without any scoring units. We both rushed vehicles towards the center to accomplish the tertiary objective but neither won the primary or secondary. A very close and bloody game. I probably should have put the demolishers on the far left side farther from my infantry line, which would still have been his primary target for all his fast assault units. If they had lived a bit longer I could have possibly worn their numbers down with templates, allowing my reserves to actually survive and take objectives rather than get tangled up with the nasties. MVP was obviously the eversor, who changed the game from a sweep for him to a draw. I actually used the lasguns in the armored fist squad's chimera, that was probably the first time I ever used those. They even managed to kill a couple of wyches that were circling around the transport. 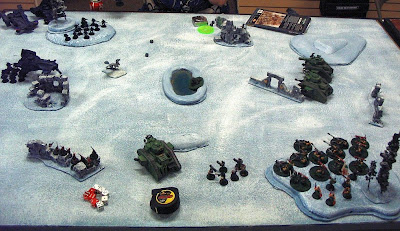 Amy is a new player in town. Saturday she was playing with a couple of crisis teams including an HQ, 3 squads of fire warriors, 1 devilfish, a kroot squad, a small unit of pathfinders and devilfish, a stealth team, 2 hammerheads, and a broadside team. I won the roll to go first and it really helped me out big time. I camped out most of the gunline in some trees in my corner, flanked my edges with the battle tanks, and held everything else in reserve. In my first turn, I was able to break the broadsides off the table just by killing their shield drones (sad face). I also downed one of the hammerheads, wiped out the pathfinders and stunned their devilfish that was standing by to transport a squad of fire warriors deployed behind it. For the next couple of turns I blew apart her fire warriors, finished off the devilfish, and generally chased the moving objective around. She finally destroyed two of the russes with the hammerhead and some deep-striking battlesuits that came in on my right side. Also on the right she advanced a devilfish with warriors from reserve and outflanked with the kroot. I shot up the kroot easily enough and the eversor jumped out and wiped out the fire warriors. I was far ahead in VPs and KPs at the end of the game but the moving objective ran away at the last second and neither of us claimed it. Good game but I felt bad for Amy who was having craptastic luck with the dice. Those deep-striking suits were clutch and could have seriously set me back if I wasn't already so far ahead by that time.
Posted by bullymike at 7:05 PM

I use a Power Armor Grey Knight with Psycannon for my Psycannon Inq. Lord.

he's easy enough to pick up, and fits the bill of a Psycannon toting guy in Power Armor.

You could do a head swap if you didn't like the GK helmet.

Nice reports. I like the buildout of your IG force.

The Sentinels have to move to one of your open FA slots, as HQ support is 0-5 total.

I'd lose one of those and the Mortars for a Hellhound (well, I do lose those for a Hellhound, actually). The JO with flamers and meltas is a great reaction unit; I think using him as a reserve to enter on your board edge looking to deal with the inevitable breakthroughs is good; this also has a chance of having him come in and save an otherwise hopelessly fleeing unit with Iron Discipline.

The pintle mounts are pricey for the tiny amount of shooting I actually get with Chimera; since you're using the Chimerae as advancing units I suspect you don't get a lot of shots out of them either.

Love the no heavy weapons in infantry squads; it just makes better sense in 5e. Either they're advancing towards objects or hiding in reserve; neither supports using heavy weapons.

Anyway, love the reports, and glad the Guard were represented in my absence (even though I'd have played Chaos for Hobby).

J - I had changed the list up a bit for the tournament from the one posted in the previous entry, see the updated list in the beginning of the tournament report. Correct about the 5 HQ support units, forgot about that restriction. But for the tourney I dropped the sentinels anyway. I was going to add a second hellhound but picked a second chimera instead, probably a mistake. Next time the 2nd HH is coming back. Can't wait till they are fast!! Will drop the stubbers most likely, you are right about that. My adventures with the guard in 5th have basically refined my ideas of what to use for killing things and how to better use the other units as irritating distractions. Which honestly has been fun since it makes them more than just a gunline that has to shoot everything before they get assaulted. In fact I've noticed that my gunline is actually assaulted less overall since i've got these other annoying units zipping around threatening objectives and such.