The third BFG tournament of 2009 was another 'eavy tournament, so I thought I would try out something redundant and hopefully hard hitting. Here was the list I used:

With a bit more practice this army would be pretty devastating. As it was I had a couple decent games and then a total bomber against nob orks. I don't know as I'm going to shill out for 2 more defilers anytime soon, even though it was very fun to play. 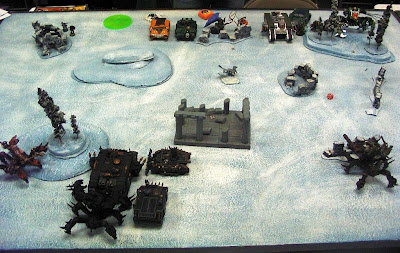 Mike was counting on some borrowed models to make the army he wanted, but when the models were left at home he had to make do with a much less heavy army. As it was, he had 2 flying nurgle princes, 3 terminators in a land raider, 2 big squads of plaguemarines in rhinos, a small squad of chosen with plasma guns and a lascannon, a defiler, a vindicator, and 3 obliterators. It was a bloody game but he had pretty bad dice rolls and Abaddon and the defilers really made a mess out of all his toys. I won with a massacre. 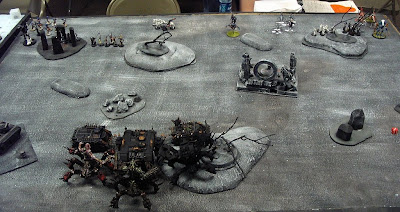 Eldar was 2nd only to orks in the "armies I didn't want to be paired against" category, but naturally for the second round I ran right into Amar's aspect-heavy force. He had Eldrad, a second farseer, a squad of howling banshees, a squad of harlequins, a large squad of striking scorpions, a small squad of warp spiders, a vyper with a bright lance, 2 small squads of jetbikes, 2 small squads of pathfinders, 2 lance/sword wraithlords, and a small squad of dark reapers. Not a lot of mech though outside of a lance vyper that was immobilized early on but lived for another couple of turns. I started everything in the middle, well aware that he would use eldrad to re-deploy and avoid a direct attack. He actually managed to roll high for the number of units he could move and split the army evenly in half in opposite corners. I pushed most of my stuff towards the left, taking potshots at everything moving with the battle cannons and sending the thousand sons out wide to bait the wraithlord out into the open. He moved the wraithlord forward as if to charge, but just at that moment the scorpions arrived as well, outflanking right into the thousand sons. After Abaddon and company ate the wraithlord and the nearby pathfinders, I sent him after Eldrad and the surviving howling banshees, who also fell. The harlequins danced out of range for the entire game until they found opportunity to wipe out Abaddon and the last of the terminators. I didn't get much done to the right side of his force, and in the end he won the primary and I won primary and tertiary. 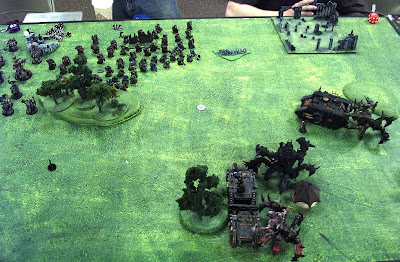 Thomas brought his uber nob biker army to the tournament, lost his first game against Kingsley (who is inarguably the best player in town) and so we ended up paired together for the third round. He had 2 klaw bike bosses, 2 fully kitted squads of nob orks with 3 klaws each, 2 squads of 15 lootas, and a big squad of shootaboys with rokkits. I played this one wrong in many ways, but I'm still not convinced it would have made much of a difference. First turn he turboboosted both nob squads around center to my left and took the first defiler out with the lootas. I managed to lash the closest nob unit and pushed it back a bit and into a ball before bouncing two ordnance blasts off them from the surviving defilers, but I don't think I even caused 1 wound. I charged forward with the land raider towards the mass of orks on foot. Second turn he charged and killed one defiler and destroyed the third with the lootas. I pulled back a bit with the sorceror and thousand sons in the rhino, and pulled way back with the nurgle marines towards the objective bouncing around in my home corner. I was intending to get abaddon and the terminators out to charge one squad of lootas but the shoota boys were blocking the way so Abby waded into them instead. I killed maybe 3-4 boys at a time while the squad's nob klawed through the other terminators slowly but surely. With Abaddon tangled up in the shoota boys for the rest of the game, the biker nobz and loota shooting easily wiped out all my infantry. We called it around the fourth turn or so. I should have just held defilers in reserve until they could charge into the oncoming bikes, charged in with Abaddon too, and maybe pestered the walking orks with the sorceror, land raider, and troops if they lived that long. Good game, what are you gonna do.
Posted by bullymike at 8:57 PM

Yeah, seriously, don't be so dang wordy next time, eh?

The "Preparation H" he needed after game 3 may have affected his typing...

Yeah, what happened against the Nob Biker army?

Gimme a break, i was at southby most of the week

Did you know that you can shorten your long links with Shortest and get money from every visitor to your short links.