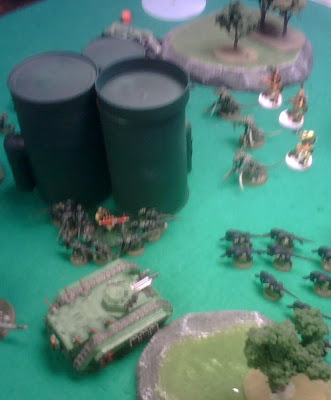 I took on Brandon's tyranids in a 2500 point Capture and Control battle last Sunday using the new guard, based on the summary sheet and what I remembered from the demo book. Here's a few thoughts from that game:

Orders are pretty sweet, and if you like them a lot, you can't not use Creed. Holy crap. If double the (command) bubble is wrong, 4 orders a turn is just plain hellish. In my game Sunday Creed was working overtime from the safety of his command tank and just had loads of fun. I used him to give stealth to a double-hellhound squadron and they came on just in time to burninate a big expensive squad of genestealers. And yes, I will probably also try the triple-demolisher outflank at some point in the future. You got to.

Infantry platoons are somewhat tied together by their new organization rules. You can't start some on the table and hold some back in reserve like you usedta could. Countering assaults with flamer squads after an enemy unit gets left out after winning assault is still effective, even more so with the bladestorm-esque order. And they're cheap enough to not feel bad about sending a whole squad of them to their doom just to stall stampeding beasts headed towards your army's core. I didn't try combining them into bigger squads in that first game, but I'm sure there'll be instances where it will work great, like KP or VP games.

The new heavy weapon team rules are a blessing and a curse. They're cheaper, they score objectives, they simplify wound removal, and they combo well with orders like "bring it down," "fire on my target," and "get back in the fight" for some annoying wack-a-mole type shit, but without the old command rule they are more prone to break and obviously die very quickly to dakka stronger than S6. The missile launcher teams in my infantry units were more survivable. It's a little weird when you first realize you only have 9 models in a squad with that setup now!

Lumbering behemoth and demolisher cannons + plasma cannons = awesome but it seems like the LRDs are just too expensive for what they do. They can put out some ridiculous firepower, but rear armor 11 is just not that big of a deal and the longer range of the standard battle cannon russ is calling my name. With three of those bastards I can hopefully shut down annoying dakka squads like lootas quickly. My AP1 and AP2 shooty squads (melta and plasma veterans, heavy weapon teams, vendettas) can still intercept and handle big threats.

Marbo was fun but died a little too quickly. The best use of him would be to place him in cover when he comes in, close enough to the edge to deny an enemy a cover save from the demo charge but still eligible for his own 3+ cover save from stealth. He's just one more thing the enemy will need to shoot at while the tanks continue their shelling and the hellhounds move up to bathe light infantry in burny goodness.

Based on some of the lessons learned in this game and conversations with other folks, I made a new list, one that probably falls on the heavy side. As it turns out, I will likely use those old chimeras as-is for at least few games.

That's a lot of ordnance, templates, dakka, and AP2 shooting right there, with enough scoring units and transports to hold my own in an objective mission. I haven't tried playing with them yet, but I'm convinced those leman russes would really put the hurt on shit with the battle cannon and heavy bolter salvo all going at once. I got myself talked into using a psyker battle squad by that master of all things evil, Minus67. When they're not assisting the ratlings in pinning folks or sending nobs running for the hills, they can pour out their own large high strength blasts, all from the safety of their chimera. Even when they inevitably get chased out, they can just trade for one of the other ones likely to be sitting around nearby. The Vendetta might just be there as a placeholder really, as I'm already thinking about building me a Devil Dog to zip around dropping melta blasts on approaching land raiders. Can't wait for May 2!
Posted by bullymike at 6:31 PM

"wack-a-mole shite" - very good! That had me howling. It's going to be fasinating to see how the new guards rules complete changes the formation. The combination of orders and nerfing the heavy weapons team will mean that the old 'stand back and shoot' option will be a lot less dominant - as heavy weapons teams are more likely to die to S6 and now have strategic importance.

Gotta agree about Creed, although you may have overplayed him - I think he can effect a unit/tank - not a tank platoon ... if he can then WOOP!

The special platoon commanders are a nice addition too ... look like I'll be trading in some of my metal 'leitenaunts' for Alraheim and the like...

Nice summary and great prognosis. Nice to see someone write something constructive beyond "they don't win, if you play like you used to play..."

IIRC he can give stealth to any unit of infantry or vehicles...

I like the platoon commanders too. But if you're bringing heavy weapons you might as well skip Al Raheim. I definitely liked JWolf's all-outflanking army the other day, that would be way too much fun.

One quick comment; you should put camo netting on your chimeras, at least the one with the Psychic Battle Squad. In the games I have played so far, I hide their chimera behind another tank. With the 3+ cover save and armor 12 people don’t even bother shooting it!

You might also note that the Banewolf’s main gun is only Strength of 1… that means it is a defensive weapon and can move 12” and shoot its hull mount too. I think that would be very brutal out flanking w/ creed.

Creed gives scout, not stealth. I'm fond of the Demolisher with max AP2 weapons right now, but we'll see how I like it as we go along. I'm already dubious on the HB sponsons for normal Russes - I worry about giving saves to otherwise dead Nobs and such.

I'm concerned about Creed being too cool for school and in every Guard army. His special order is good and his 24" and 4 orders are insane.

Nice little article here. (noticed what jwolf already pointed out about the scout) I share the same sentiments about the demolisher with you. I'm using it right now in a 1k list but can't imagine wanting to have to get within 24 in a full size game.

Creed is only worth it if you take loads of infantry in your Guard army... which might become the norm. I for one am still stuck in 4th edition relying on my vehicles to do the majority of the work.