I got in a couple 2000 point guard test games this weekend, first a rematch against tyranids and then a couple games against Jay's Necrons. Against the nids I played with the following:

I dropped the vendetta for a number of reasons. First off, I obviously don't have one of those unreleased flying bases, and the thing takes up so much room on the battlefield I'm willing to wait. Second, I'm just not that impressed with their capabilities yet. I think fielding more than one would be better, but I just don't know where the points would come from or what would be the best way to use them. 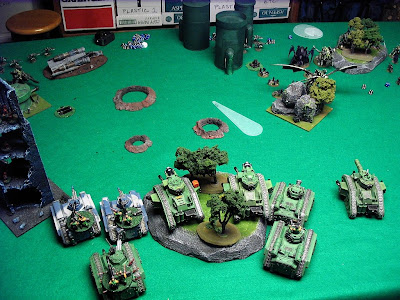 Brandon was playing with a flyrant, a dakkarant with 2 guards, a lictor, 3 warriors with deathspitters, a dakkafex, 2 squads of stealers with carapace, 1 squad of scuttling stealers with feeder tendrils and scything talons, 15 gaunts without number, 8 leaping ripper bases, 2 sniper fexes, and 1 beefed up fex with talons and a barbed strangler. The flyrant made it across most of the table, wrecked the leman russ and right-most demolisher, and was eventually finished off by sly marbo, who emerged from the woods to put a ripper shell through its giant alien crown. The demolishers, ratlings, and veteran squads took pot shots at the guarded tyrant and sniper fex on the left side. Raheem's command squad outflanked on my left, flamed out the genestealers hanging back there. The sniperfex turned around and wrecked his chimera, but another chimera containing the melta veterans pulled up and helped Raheem kill the fex and guarded tyrant, leaving them in command of the nearby objective... temporarily. The lictor jumped out of the abandoned gun turret and scythed Raheem down. In response, I charged in with 10 veterans. The slippery bug easily evaded their clumsy attacks, ripped just one of their number in half, and the rest of the vets lost their nerve and were cut down as they fled. I pulled their transport back and consolidated my position on my home objective. On the right side, the two infantry squads outflanked just behind his own outflanking genestealers and flamed them to death as well. They lost a few men to deathspitters, but enough survived to capture the nearest objective on my right side. The sentinels came in on that side as well but their shooting went wide and they were wrecked quickly. Between the demolishers and the lascannons, I destroyed two more carnifexes, and killed his third and last stealer squad with chimera dakka just in time to seal the win: 2-0.

Here's Marbo making one more attack run against his surviving sniperfex on the last turn: 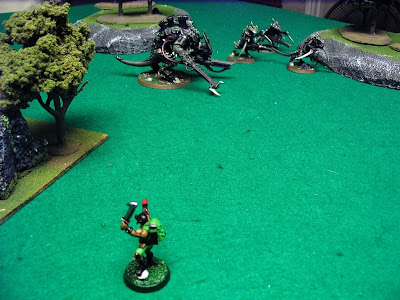 I really liked the feel of this army, especially Al-Raheem, but the sentinels just seemed really weak with the multilasers, and I am not willing to pay much more to make them effective. For my next game, I wanted to try the psyker battle choir. I'm thinking about converting up my repentia for that purpose, clipping their swords and making them into some sort of witch chain gang. Instead of the whippy matron, I'll use a retributionist model for their handler. I also switched out the flamers in the infantry squads for meltaguns (to possibly combo with bring it down) and changed the hellhounds to banewolfs to give chem-cannons a try. 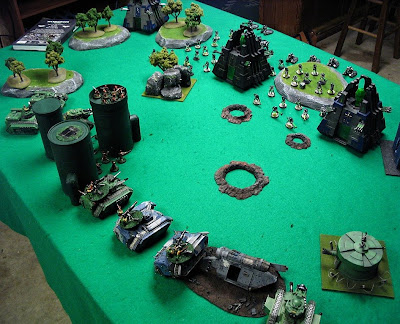 This was the first of 2 games against Jay's triple monolith list, which also included a destroyer res-orb lord, 4 squads of 10 warriors, and 2 squads of 4 destroyers. The first game, playing for victory points, he went first and moved up in a big line. The psykers targetted the destroyers on the left, made them poop their robot pants, the ratlings dropped two, and they failed leadership and 2 fell back off the table edge. After that stunning demonstration of ULTIMATE POWER IN THE UNIVERSE, IE THE FORCE he brought the rest of the destroyers and the lord through the monolith on my right and unloaded into the psykers, easily wiping them out. I counterattacked with a banewolf and the veteran's plasma guns, destroying them. With his lord and main anti-tank guns silenced, Jay conceded and we started a second game.

Here's his lord and destroyers going after those blasted psykers: 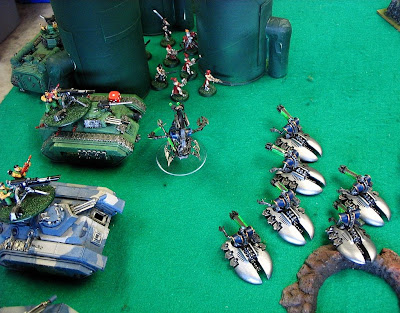 For the redux, we played capture and control with spearhead deployment. I passed first turn to him and we both placed our objectives in our respective corners. He started with only a single squad of warriors in the tower, while I made an arc of tanks 12" from the table center. The psykers jumped in the company command chimera and wheeled off towards the tower while those in range took pot shots. On his second turn, only the two monoliths came in, dropping right in the midst of my armor. He had a good run with 6's and the gauss arcs shook most of my tanks and destroyed both a leman russ and a demolisher turret. Al Raheem came in on my left with one of the infantry squads, while the other infantry squad and Sly Marbo attacked the beleagured squad in the tower. Marbo somehow only drew combat, and when his third monolith deep struck nearby in his next turn, they teleported out of combat and stopped the battle choir's chimera cold, sending them running into nearby cover. A fourth warrior squad teleported through that same monolith in the next turn and he cleansed his home objective for good. Back in my corner, I fought off two different incoming necron warrior squads with plasma and flame attacks from banewolfs and veterans, and an immobilized demolisher took down one of the monoliths with a direct ordnance hit. In the last turn, I circled my wagons to prevent the other lith from contesting my objective. It ended in a draw.

I liked the psykers more than the sentinels, but I wish they had a chimera of their very own to give them a little more protection and mobility. The banewolfs were effing sweet. Their speed and double template death make for a hell of a counterattack. Relative to my first game with the new rules, I didn't really miss Creed since most of my stuff is mobilized, and the heavy weapons in the vets and company command squad are BS4. I didn't use Al Raheem's special order, but his "bring it down" and "first rank, second rank" came in real handy for his flank attacks. Good times. T-minus 6 days and counting!
Posted by bullymike at 5:40 PM

Sound like pretty solid lists, especially the PBS one (though yeah, get a chimera for them). You should check out armored sentinels- probably not best in the outflanking list that you have going on there, but they make great counter-assaulters and generally resilient tank/marine hunters that your opponent doesn't want to waste shots on.

Again, another great post where you're really getting a handle on the guard potentials. The series of ambushes and counter-ambushes make the guard list a lot more fun... nice work.

I love these insights...