Great example of how you can be up one week and totally suck it hardcore the next. For the hobby tournament at BFG I decided to roll with a mixed chaos force led by Abaddon. I thought including a lash sorceror might be pushing it a bit, but shit, I could have rolled double lash and still gotten my ass handed to me in these games. It seems to me now that small elite forces are just getting shittier and shittier with each new codex. And I was initially thinking about taking space wolves! Ha! 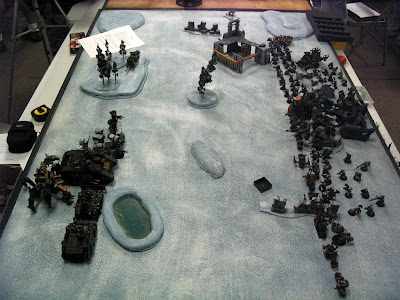 My game against Daniel started innocently enough. He had a varied mix of orks including a warboss on a bike, 7 or 8 standard ork bikers, several big boyz squads, a couple boyz squads in trukks, a battlewagon with a bunch of nobz, 12 lootas, and 2 looted wagons with boomguns. He rolled for first turn and table edge and spread everything out pretty evenly. Given the victory conditions and the disparate sizes of our respective armies (I mean, look at the fucking picture, are orks broken or what??), I tried to concentrate my forces on one side and hoped to break through with Abaddon as my primary bowling ball. On his first turn he easily destroyed the defiler with max shots from the lootas. Of course my first turn when I pulled forward to meet the bikers Abaddon charged into the warboss and rolled a '1' for Drach'nyen, suffered a wound, and died to the return powerklaw attacks. That was pretty much the end, it just went crazily downhill from there, including the sorceror and plaguemarines getting pinned and wiped when their rhino died and 2-3 failed psychic tests. He ended up with full points. Just a ridiculous, spirit-crushing first game. My only consolation is the severe, severe pain I hope to inflict on fucking orks when the new guard book comes out. 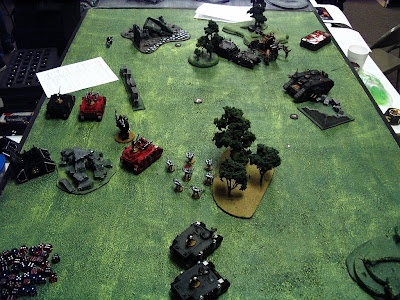 John had a cool witch hunter/grey knights army including Karamazov, three sister squads with flamers and heavy flamers in rhinos, a big squad of grey knights with a couple psycannons, 8 seraphim with 2 twin-hand flamers, a dominion squad with 4 meltaguns in an immolator, a celestian squad in an immolator, and 2 exorcists. This game was pretty close starting out, as we traded tank-busting melta assaults at the frontline while his sister squads circled around on my flanks. His mechanized troops evaded lash for the most part and I wasn't able to really zero in on anything. Mostly I just tried to keep Karamazov at a distance until I could make a decisive attack with Abaddon. On my left two sister squads emerged from their rhinos to lay down some flamer hate on the berzerkers, who had been evicted when the dominions destroyed their land raider. The 3 survivors, along with Abaddon and the defiler, counter-attacked and wiped them out. I got caught up in the violence and could have been a little closer to the objectives when time ran out. As it was I was only up by 1 and so we got a draw on the primary objective, he earned the secondary, and noone got the tertiary. 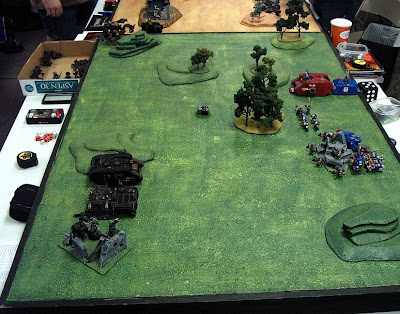 I was just saying I hadn't played against Frank in a while and of course we got paired up in the third round. He had a librarian with gate and smite, an assault cannon/heavy flamer dreadnought, a bunch of Grey Knight Terminators, a small squad of marine terminators, three bikes with 2 flamers, a squad of sternguard in a land raider, a big combat-squadded, outflanking scout unit, and a vindicator. The thousand sons and defiler tried to hold down my home obective in my far left corner, while everyone else attacked on my right towards the grey knights sitting on his objective. The defiler lost its battle cannon to a single first-turn lascannon shot from his land raider and so I charged him forward to intercept the approaching terminators and librarian. The walker killed the psyker but the return powerfist attacks from the terminators easily destroyed him. They consolidated 6" closer to the thousand sons and charged in on the next turn with one of the outflanking scout squads. He was then firmly in control of my home objective. It was up to my forces on the other side of the board. Unfortunately, Abaddon charged in for his first combat of the game and rolled a 1 once again for the demon weapon and went down to the return S6 power weapon attacks. Cue Price Is Right letdown sound effect. I was done! The end! Bah!
Posted by bullymike at 5:09 PM

At least you didn't have to face me and have abaddon turned into a spawn.

Now that's some dice rolling I am familiar with.

Also familiar with: The famous "losing horns" from The Price Is Right.

Sounds like a rough, rough gaming day. I know how those go, and when they happen, they really suck. Ass. By the metric ton.

Anyway, what I wanted to comment on was how I'm feelin' ya on the whole "kick the shit out of orks with the new Guard".

Kill a shitload of 'em every game, it makes the world a better, happier place.