Dragon's Lair hosted the first of 2 tournaments in the A-town this month, a 3-round 1850 matchup using the standard missions and deployment types. There were 10 people playing, mostly familiar faces (though a bunch of folks were out of town for Adepticon). I went 3-0 against some nice folks and everything came up Bully. I took a guard/demonhunters list:

All in all it worked pretty well, with the dakka, lascannons, and ordnance blasting vehicles and tough infantry while my own troops held back in reserve to make late-game objective grabs, intercept assaulters, and/or prevent easy kill points. With some practice using reserves, guard is pretty awesome already - if the new book is as good as folks are saying it is... prepare for the new green tide of cheese. 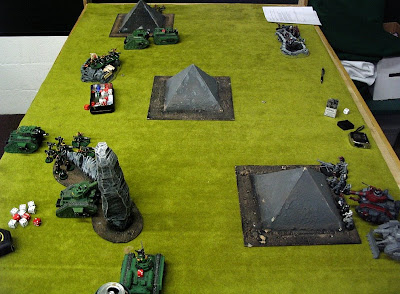 Greg had drop troops and carapace armor guard, with a 4-meltagun HQ, 3-meltagun veteran squad, 3 infantry platoons, including 1 with lascannons and 2 with various special weapon loadouts, and 2 standard russes. I won first turn and commenced firing. Even though his deep-strikers never landed within mystic bubble range, I still pretty much shot the hell out of everything he had on the board over the 6-turn game. Hellhounds were his utter doom until he destroyed one and broke the other one's gun. My troops came on from my table edge to counter-attack one area where he dropped most of his guys, pouring it on with flamers and hellguns before moving up to retain objectives. I won with a major victory. 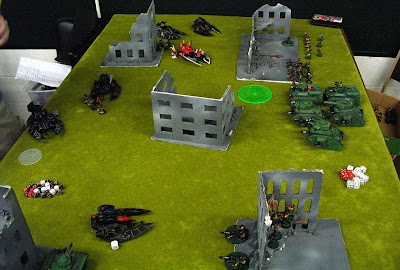 Bryan was playing with his usual Eldrad/Yriel flying circus, including a serpent full of fire dragons, a few pathfinders, three squads of dire avengers in wave serpents, and 2 fire prisms. I deployed the Command HQ, 2 lascannon squads, and the stormtroopers in their chimera, deep-struck with the meltagun vets, held the infantry platoon in reserve, and brought everything else on in the first turn. He shredded my forward lascannons with Eldrad's dire avengers, but I disabled their transport, pinned them with ratlings, and whittled them down for the rest of the game. Eldrad did survive to pester me with eldridtch storms and such until one of the hellhounds roasted him alive. I also sunk the fire dragon serpent and left them stuck in the middle of the board, wide open beaver for my inquisitor heavy bolters to wipe them out quick. After I broke one of the Fire Prism's cannons, he rammed the back of one of my hellhounds, immobilizing it. He attacked my objective with two of the dire avenger wave serpents, including the one carrying Yriel. I shredded the dire avengers but Yriel survived to charge into my infantry squads right on top of my home objective, killing one and tying up the second until the end of the game. The stormtroopers advanced along my left flank and assaulted the pathfinders who had come from off the board to take his home objective. After dispatching the eldar snipers, they survived a fire prism drive-by and managed to meltagun it to death with double 4's on the damage roll. They held tight till the 6th turn. I won 1-0, which gave me a minor victory. 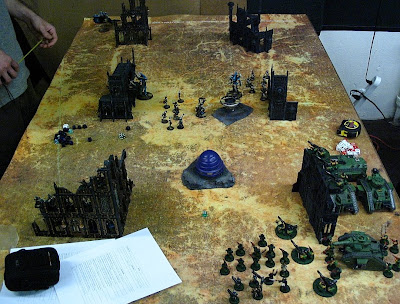 Chris had a pretty bad-ass walking eldar army, including a farseer with doom and fortune, an avatar, 2 squads of 9 fire dragons in wave serpents, a big squad of harlequins, 3 squads of dire avengers, and 2 wraithlords. I basically castled up in my home corner while he started his gunline up close in a 12" ring from the center. Things started off really well when I managed to demolish one of the fire dragon wave serpents to my right and the other immobilized itself to my left on some terrain while trying to tank shock my ratlings. Other than a few bright lance shots my armor was safe for the remainder of the game. I targetted the avatar and fire dragons first while he moved up en masse. My chimera's heavy flamer killed most of the fire dragons on my right and one of the infantry squads came on from my table edge to finish them off. Their primary mission accomplished, they held off a wraithlord for several turns before a lone dire avenger joined in to put them under. My hellhounds and infantry command came on my table edge right behind my tank nest just in time to burninate the farseer and harlequins, who had just swept a lascannon squad in close combat. At the last second I managed to pound a wraithlord with ultra-accurate lascannon and plasma fire from the demolishers. I won 8-4 and got a victory. The margins of victory had not been set up before the match so things got a little confusing at the end, but I finished in the lead, Chris got 2nd, and (a third guy - somebody remind me what his name was) got third. I picked up a third demolisher and 20 more catachans to help me flesh out a killer army with the new book in May.
Posted by bullymike at 8:26 PM

I agree with you on the current IG codex. It's not bad. There are plenty of tricks and solid tactics in it.

It does suffer in Killpoint missions, but in the new codex I will miss the flexibility the current codex gives. (Light Infantry, for an all infiltrating and outflanking force coupled with an Emperor's Tarot to get to go first)

Congrats! Wish I could have been there but happy to see you won. I am really excited about getting my hands on the FLGS copy of the codex next week to start working on some number crunching...

I believe 3rd, ie best painted, went to Karl with his Space Marines.

Battle reports leave me nothing to comment on, other than I'm pleased to see your troops in reserve rather than providing extra assault opportunities to the enemy.

I told him about all your dirty tricks Jon. The only thing he doesn't have is the damn inquisitor.

I hear all these people talking about reserving in their troops. I personally dont do it. I use small ST units hiding behind my advancing tanks to claim objectives. I ought to try it though.

Ya who cares about hobby heavy, meh I wipe my hands of the whole mess. The distinction is totally fucking subjective just as it always was and that has no place in a competitive environment.

Kings your grenadiers work just fine like that since the squads are small and can hide. I just really like the flamer counterattack that reserving inf squads offer.

And jay reserves is not dirty tricks! Everyones doing it! Its the natural response to goatboy's just kill everything strategy a few months back. I'm finding the best way to fight those assault monsters like templars, orks, etc, is to hold back out of assault range, split the enemy forces, shoot the shit out of them, distract the survivors w fast moving tanks and such, then grab late game objectives w reserves... Still practicing with it tho!