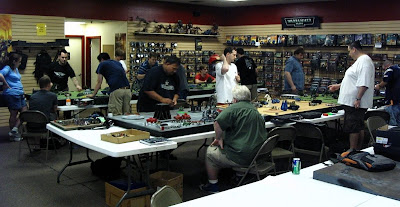 Last Saturday I played in another 'eavy Battleforge tournament. It was their usual semi-monthly 2000-point anything goes 3-game brawler, the twist being the new codex in play and plenty of folks in town with solid guard armies and experience. I couldn't resist playing guard myself either: 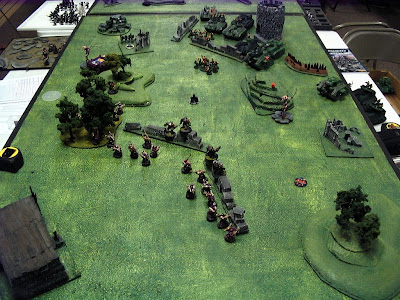 I don't remember what the other two objectives was because this game got cut short. Nick was playing his slaanesh chaos army, with two flying lash princes, three squads of eight noisemarines with sonic blasters, blastmasters, and one rhino, and three squads of two obliterators. I deployed everything but Marbo and the two veteran squads in their transports. I really need more practice with spearhead, the layout just fucks with my brain and my vehicle-heavy army usually gets in something of a traffic jam as a result. Nick went first, moving forward with everyone but three of the noisemarine squads, lashed one of my transport-less infantry squads forward and pinned them. He also managed to immobilize one of my demolishers with the obliterators. I returned fire and killed one of the lash princes and popped the noisemarine rhino. He was continuing his forward assault, destroying one demolisher and mauling both infantry squads, but was suddenly called away on an emergency and the game ended. He probably would have done pretty well in my backfield with those noisemarines and 2nd demon prince, and I would have had to pour shots into them rather than those annoying obliterators who would all the while be cracking transports and light tanks all over the place. Still, it is a bit harder to kill vehicles nowadays, and if I could have stopped the immediate assault I might have been able to pour enough killpoints into the center for a win or draw. In any case I very likely ended up with more battle points than I would have had we played it out. 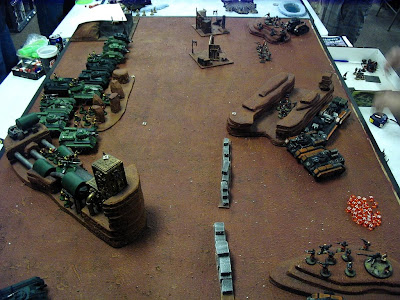 Chris was playing his black/orange penal legion guard, with two primaris psykers, Sly Marbo, three penal legion squads, one veteran squad with a lascannon, one with grenade launchers and an autocannon, a demolition veteran squad with plasmas led by Bastonne, a valkyrie with rocket pods, two squadrons of two banewolfs, one demolisher with plasma sponsons and one with melta sponsons. He outflanked with the valkyrie (transporting both psykers and the bastonne veterans) and one penal squad. I got first turn and set up in a line, and he responded by splitting most of his forces in either opposite corner, with the banewolfs coming up right center. I pushed the hellhounds far forward and popped smoke while the rest of my army took potshots. I shut down the two penal squads and one of the banewolf squadrons early on, and our tanks mostly bounced shells off of each other. He got the other banewolf squadron in range and burned the shit out of one of my infantry squads. The chem tanks also killed my Marbo after he popped out and demo-charged the flanking penal legion squad to oblivion. His valkyrie dropped off the plasma vets and they quickly took out the basilisk. They got back in and flew towards my lines in combination with Marbo and the surviving banewolf squadron. It took all the surviving elements of my army to fend off the attack and claim just one objective to his zero at the end. A last-minute melta attack wrecked the valkyrie and pinned the vets inside, keeping him from grabbing or contesting an objective. Neither of us scored the secondary or tertiary objectives. 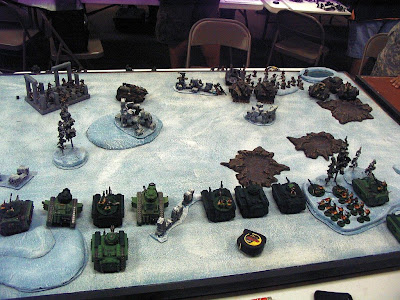 Deployment: Pitched Battle
Primary Objective: Table Quarters
Secondary Objective: Victory Points (win by 300 VPs)
Tertiary Objective: Crazy Hero (would take too long to explain)
Kingsley was playing his bug-hunter guard, including a company command in a chimera, a battle psyker squad in a chimera, a veteran squad with Harker, an infantry platoon with a few infantry squads and a lascannon/missile launcher heavy weapons squad, a devildog, two squads of two sentinels with autocannons and lascannons, a demolisher with a hull lascannon and multimelta sponsons, a demolisher with three heavy flamers, and two leman russes with heavy bolters. I moved forward with ease on my left side, wiping the devildog and two infantry squads in cover there with demolisher, devildog, and hellhound fire. I shut down his heavy weapons squad with the psyker squad and burned them with a veteran squad's chimera heavy flamer later on when they managed to regroup. His heavy tanks took a heavy toll on my infantry and psyker squads. I flanked right with my other hellhound and burned one of his squads on the right but it was destroyed quickly in return. In the end it came down to a big tank mashup in the center, with a lot of destruction and all quarters contested. We drew the primary and noone got the secondary or tertiary.

Jon won first with his Tallarn guard, and was the only guard player (out of 5) not to play another guard army. Vince got second with his chaos marine army, and Frank won third with his Ultramarines. Guard is pretty tough as it turns out, and when two guard armies go head to head, it gets pretty brutal. I definitely like the mechanized chimerathon army, and I will probably just ditch the infantry platoon for more mech veterans. One unit I really want to try now is the plasma vets with Bastonne in a valkyrie. I think that just might be my solution to those pesky capture and control missions. I also liked the double russ squadron Kingsley was fielding; it put out a shitload of firepower and was too daunting to even try and bring down when I was already using all my shooting to stop his scoring capability. Marbo was 1 for 2 as far as getting his points back; the third game he actually bounced his demo charge off the back of Kingsley's psyker chimera and killed himself without doing any damage at all. My psykers also did well, peeling off enemy units here and there and generally being a distraction/target. They might not be spectacular in every game, but getting off their power in the first one or two turns can be disastrous for a vulnerable enemy. And the blast is nothing to shrug at, either. Anyway, lots of fun still to be had playtesting this bad boy out.
Posted by bullymike at 2:28 PM

60% of the participants were playing either Chaos Marines or Guard.

Mike, I've got 2 Leman Russ and 2 Chimera, next purchase you reckon I should go for another 3 Lemans or 3 Chimeras? OR a mixture of the two?

As predicted the Guard would do well, and then face each other under the Swiss system, eliminating most from contention.

You should have thrown the middle game and gone for full points in the third against a softer opponent. :)

@Jimbo
That is basically what I did by mistake. I won my first game and could have won the second game but ended up with a tie. Mike and I had almost the same score going into the third round on table two. However I think we both got about 6 points, knocking eachother out of the running.

@bully
I agree you should take out the platoon for more vets, however I would also keep the lascannons out of the chimeras. At first I was scared of all the Las in your army but about half the units moved inside chimeras. Either rush the APCs forward to contest without men inside or take off the las and use their meltas more.

Played my first Guard vs. Guard last night, my Straken / Al'Rahem insane list vs. Kingsley's new IG build. I have to say, Medusa w/ Bastion Breacher is the king of vehicle killers.
And a Straken superhero squad is more fun than a barrel of ninjas.

The game was really fun and tense, and I look forward to more Guard scrimmages. #1 best thing about the new Codex? Guard armies are a lot more varied than before, making IG vs. IG a blast.

The game against Wolf was great. Called early due to the store closing. Guard vs Guard is a lot like Eldar vs Dark Eldar... both sides dish it out but can't take it at all. Through 3.5 turns there were less than 50 infantry between us, and maybe half a dozen tanks. We just murdered each others army.

I'm looking at your deployments in all 3 matches and I think that you are being far too timid with your armor. Lining them up like infantry behind walls really isn't the best use of tanks. You need to be moving them forward, physically blocking enemy lines of advance and using their bulk to shape the field to your liking. Your (sponson-less) Russes should always be moving and firing 1-6"/turn. Your Hellhounds should always be moving and firing 7-12"/turn. This protects them from assault infantry (6+ to hit them in HTH) and forces your opponent to react to your movements instead of waiting for him to come to you.

Let's take your first game as an example. Spearhead allows you to bring in reserves anywhere along your long table edge. That's huge! Instead of sitting in the back of your deployment zone waiting for the chance to fry his assault troops *after* they pop your Russes, the Hellhounds should be in reserve so that they can come in 12" on turn 2 (you did bring an astropath, right?) and fry those marines behind the wall that were shooting up your light vehicles so easily. Put hull multi-meltas on those Hellhounds and they can even hammer tanks within 36" of your table edge this way.

Suddenly, your opponent has 2 scary Hellhounds and no more fire support troops in his backfield. Plus a Chimera or two sitting right on top of his own objective. Now he has to split his attention and make hard decisions about what goes where, which hands *you* the initiative instead of him. :)