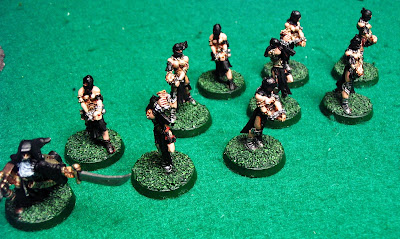 Here's some pics of my bound witches. Obviously they're repentia, minus the big ball-busting eviscerators, with a little extra carving and painting to redo the hands. I figured I've played enough games with repentia to know I'll never use them again, and they'll be be much more useful as guard battle psykers anyway. Since the uniform and general theme of the model matches, for the Overseer I decided to use the same redemptionist model I've used before as an inquisitor and mystic. 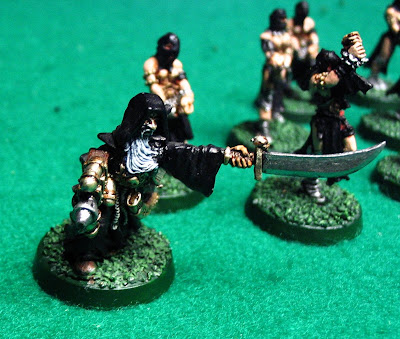 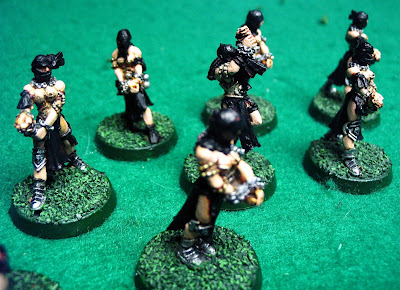 The basic concept is that they're a bunch of accused witches who have been round up by this old puritan (Confessor Mather), chained and bound, and led into battle where the noise and chaos draw out any powers they might possess to devastating effect on the enemy. If one of the girls gets out of line or shows signs of deeper possession, the puritan burns them up with his hand flamer, along with one or two others who might be standing too close.
Posted by bullymike at 3:19 PM

something about those models is very phallic...

heheh. they're definitely not perfect, on some of the models the hand positions are pretty awkward, but I had them in stock and I wanted something different than a bunch of the sanctioned models. at least they have the chains and whatnot.

The chains are good; you should also chain the models together (making 2" unit coherency easy).

What a cracking idea: nice one!

Could you maybe model simple candles or thuribles onto where their hands are?

Now I know what IG cheese you're bringing tommorrow...