Over the week leading up to Saturday, the first BFG hobby tournament since the new guard book came out, the local forum was host to several heated discussions on where certain builds fell on the heavy/hobby spectrum. I don't care to rehash those generally alarmist arguments here. I came up with what I thought was a pretty mixed and fair catachan theme list using the three "special" characters. No specific unit was a gamebreaker in any of the three games I played, but each performed pretty well and allowed each of the games to get interesting in their own ways. I played some fun, tight games against friendly opponents but didn't end up actually placing. 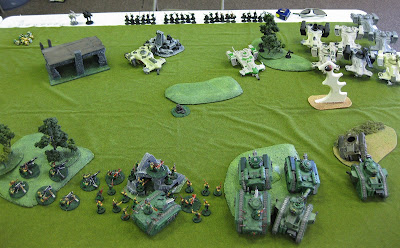 I drew the bye the first round and played against Brandon, aka Minus67, one of the owners of BFG. He was playing an all-mech tau with two suit commanders with a flamer and fusion gun, four devilfish full of 12 fire warriors, two devilfish with four pathfinders, and three hammerheads. I tried to pin him up in the corner by bringing down some of his skimmers in key traffic jam positions, and it worked if only for a while. His commanders dropped in and popped a couple tanks, and I had to take them out with Straken, one with meltagun shots and one in hand-to-hand. The hellhounds ran all over the place, taking up space and burning up pathfinders, gun drones, and eventually fire warriors. Marbo dropped in behind one of the fire warrior devilfish and merely stunned the tank with his explosive charge, and he was killed quickly thereafter by gun drones. Harker came in and blew up a flanking hammerhead with their assorted demolitions. In the end I won the primary objective (you get it automatically for playing the bye game), as well as the secondary by grabbing the floating gas tanks at the last moment. 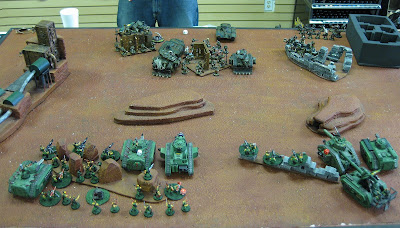 Deployment: Pitched Battle
Primary Objective: Capture and Control
Secondary Objective: Have a non-scoring unit in opponent's deployment zone at end of game
Tertiary Objective: Destroy two of your opponent's scoring units
Bonus Points: All your HQ are alive, all enemy HQ are dead
This was probably the third tournament in a row where me and Kingsley were paired up against one another in a guard-vs-guard smackdown. This one was pretty much like the rest, each of us inflicting moderate damage each turn and trying to grab or contest objectives at the last second. I flanked with the hellhounds and took out the two infantry squads in his corners, and tried to contest his home objective by hammering the nearby enemy troops with ordnance and missile fire. He took out my heavy weapon squads fairly early on. He charged up with his infantry command squad, led by the commissar lord, but their assault on my front rank fell flat since they all got counter-attack and furious charge from ole Ironhand hanging out nearby. For his part, Straken defended my home objective from a storm trooper deep-strike attack, but was eventually killed by veteran and manticore tank shooting. It was a bloody and fun game and we ended up drawing on all three objectives. 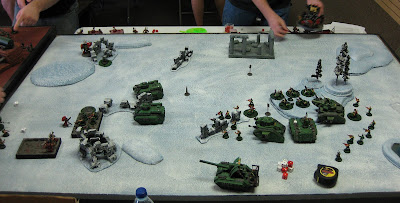 Jon (JWolf) brought his Huron chaos list, which aside from the main event included a lash sorceror with wings, a squad of eight possessed in a rhino, five raptors with two meltaguns, five terminators with assorted combi-goodies and power accoutrements, two squads of eight berzerkers in rhinos, a large squad of chaos marines with a lascannon, a multimelta dreadnought (my chosen special unit of his), and a defiler. The picture was actually taken on the bottom of the third turn. Jon had started his whole army in reserve, and I took my first two turns to spread out along my long table edge and away from my right short edge. First the raptors and possessed hit on my left edge, blowing up the melta vet chimera. Then Harker's vets and the sentinels came in behind the possessed rhino, shooting up the squad after I popped their transport with the Leman Russ. The defiler and berzerker rhinos arrived from his table edge, and I either blew up or immobilized them in the backfield. I just slowed them down in the end, and when we rolled to end the game after the fifth turn, he was holding two objectives to my one. I might have held out if I'd had another turn of shooting, alas we'll never know!
Posted by bullymike at 7:28 AM

I was pleased to squash Marbo with my Defiler, though, definite highlight of the game for me.

Thanks for being, as always, an excellent and agreeable opponent. And for immobilizing Straken's Rhino, so he couldn't eat my whole army.

And by Rhino, I mean Chimera. It was my Rhino you immobilized. After I repaired the first immobilized on it...