I'm a few weeks late in writing this up, but here's a run-down of my first round 'Ard Boyz games at Battleforge Games. I went 2-0-1 and earned second place. Here's my 2500 point guard list:

One of the best things about the list is the number of infantry squads which, along with the astropath, allowed me to stymie outflanking units and control where deep-strikers might land (i.e. more than 6" from my tanks). Manticores are just fun as hell and noone ever shot at mine; it survived the whole tournament and fired its whole rack every game. As far as effectiveness, I'm still not 100% convinced, but those turns where you get 3 bang on-target S10 ordnance hits are definitely exhilirating. Loved the plasma command squad, but I'll probably drop the commander's powerfist. Psykers did well against necrons, less so against dark eldar, and didn't have much effect at all against guard. The Hellhounds were nice but I'll probably switch to banewolves for the extra AP3 saturation.

Here's a few pics from other tables: 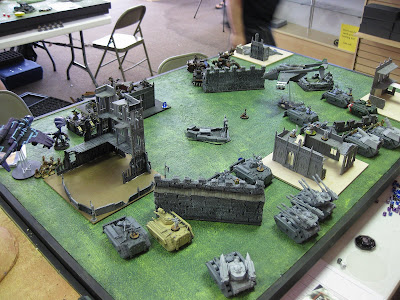 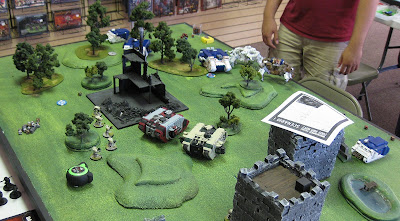 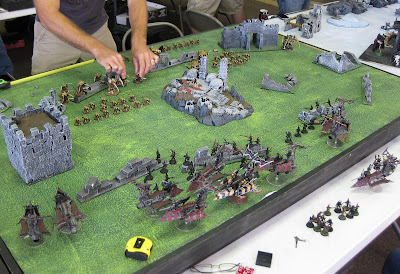 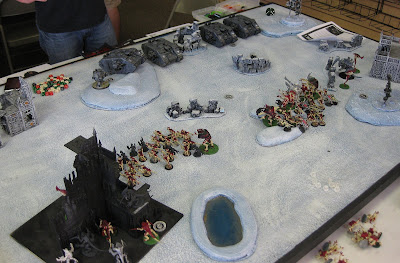 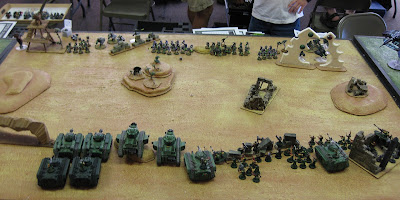 Mission: 3 Objectives + Annihilation
Deployment: Pitched Battle
Bonus Points: Control all objectives at game end, opponent has no units in your deployment zone, all of your HQs are alive, you destroyed all enemy troop units 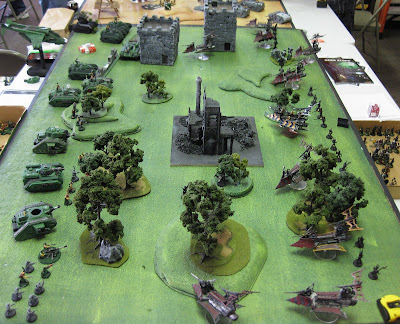 I lucked out and went first in this game, which allowed me to spread out a couple of infantry squads along the 50-yard line. John decided to start everything off the board. I really put a beatdown on him but he had plenty left at the end of the game to earn a draw. I was able to keep both of my HQs alive, so I ended up one point ahead of him. Great game. 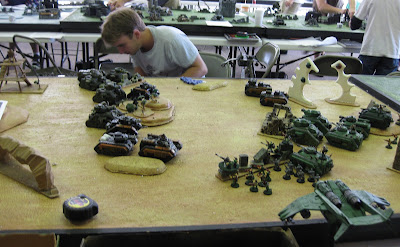 Mission: Capture and Control + Annihilation
Deployment: Spearhead
Bonus Points: control both objectives at end of game, have a different scoring unit in at least three table quarters at end of game, destroy all enemy troop units, have one HQ alive and enemy has none at end of game

Chris was playing with 2 primaris psykers and a squad of plasma veterans in a valkyrie, 1 squad of melta vets, 1 small squad of ratlings, 2 squadrons of 2 banewolves, 1 squadrons of 2 demolishers with heavy flamers, 1 squadron of 2 demolishers with multimeltas, and 1 squadron of 2 leman russes with heavy bolters, With my closest objective fairly near my home edge, I held both melta vet squads and hellhounds in reserve. We shot each other up across the middle, his demolishers and banewolves inflicting good ordnance damage before my melta vets took out one squadron of each. The command HQ and psykers assaulted his home objective while a couple of infantry squads run up behind to try and make a late-game grab. On my home objective, our valkyrie plasma vets dueled it out until my guys were the only ones left standing. Once again I immobilized his flat-out moving valkyrie and destroyed it at the last second, preventing it from contesting an objective. He was ahead in killpoints so I earned a major victory.
Posted by bullymike at 8:41 PM

Congrats on qualifying Mike! Good luck in the next round!

I thought round two was this weekend... or was this last months battle report?